Reno’s Zazpiak Bat Basque Club is hosting its annual San Martin dinner/dance this Saturday, November 10th at the American Legion Hall (877 Ralston St. Reno, 89503).  Doors open at 4:30pm with cocktails and appetizers, followed by dinner at 6pm.  The menu includes steak, rice, vegetables, salad, bread, cheese wine and dessert for $20 per adult with an RSVP, or $25 without.  Children’s tickets are $10 or $12 respectively.  After dinner, stick around for some Mus, dancing and socializing. This is also an opportunity to nominate club members for positions on the board of directors.  To RSVP, or for more information click here.

Basque Film of the Month

This month’s NABO Filmategi featured film is Vacas by Julio Medem.  This film begins during the Carlist War in 1875 and ends during the Spanish Civil War of 1936 tracking three generations of two families in Gipuzkoa and a rivalry that spans decades.  The film is in Spanish with English subtitles.  If your club or organization would like to show this, or any of the other films in the Filmategi Catalog, at an upcoming event, please email filmategi@nabasque.eus and it will be sent to you.  To see a trailer of Vacas, click here. 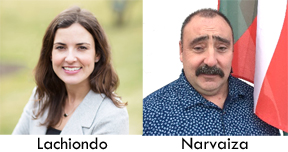 Facebook has been full of election results, but two of these stand out with two Basques running in races in different states coming out on top.  Diana Lachiondo was successful in her bid for Ada County Commissioner in Idaho, and Aitor Narvaiza was elected as Elko, Nevada’s new Sheriff.  Lachiondo will now represent District 1, which includes most of Boise, and Aitor is now fulfilling a promise he made to his late father.  To read more about Lachiondo’s victory here is an article in the Idaho Stateman. To read more about Narvaiza, here is an article form the Elko Daily Free Press.  Zorionak to these two and to any other Basques who may have participated in these elections.