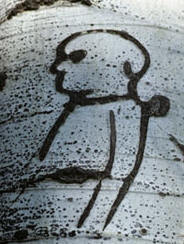 Carvings on the bark of aspen trees tell many stories about the sheepherders who passed through the ranges of the American West.  Many Basques literally left their marks on varied topics given us a unique window into their solitary existence.

Those who have ventured on hikes into the mountains of the West have long known about the carvings on aspen trees.  Some carvings are of names and initials, some carry dates and various phrases in different languages, some are images of humans and animals.  But what what did these all mean?  Who created them?   We some not all of the answers.  These carvings on the bark of aspen trees tell many stories about sheepherders who passed through the ranges of the American West.  And a good many of these sheepherders were Basque.  These carvings on the bark of aspen trees provide a record of the presence, experiences and thoughts of sheepherders who passed through the groves decades ago.   But these  tree carvings or arborglyphs are rapidly vanishing as the trees are getting older or succumbing to fires, disease, etc.  Historical records, therefore, are disappearing.

Carving on aspens seems to be a universal Basque sheepherder tradition since the late 1800s. The quality and readability of the carvings varies a great deal.  Some of the etchings are political in nature, making a claim for Basque solidarity.  Others are instead about the dream girl of herder; some echings are of poetry while others are basic school boy remarks like "Joxe was here".

The expert carver knew that he had to be patient and precise.  The better carvers knew how to pick the right tree and the right tool, and how to make a very thin incision of the right depth to encourage the perfect scar to form within a few years, to leave an enduring and undistorted representation of his name, message or artwork. 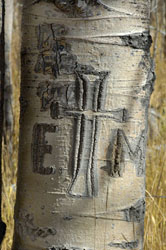 It's worth taking into consideration the intended audience.  Sheepherders were carving their messages and drawings for their own enjoyment and for other sheepherders.  They could not have really anticipated much general attention in these remote areas.

"The trees are a wonderful window into the Basque immigrant's way of life from the turn of the century to today. They provide insight into a group that is largely inaccessible in any other way" said John Bieter, Ph.D. of Basque Studies at Boise State University in Idaho.

Susie Osgood, a Forest Service archaeologist based in California, said. "[The etchings provide] a realistic window into what you think and do out here when you're all alone. In the 19th century, you were your own entertainment" she said. 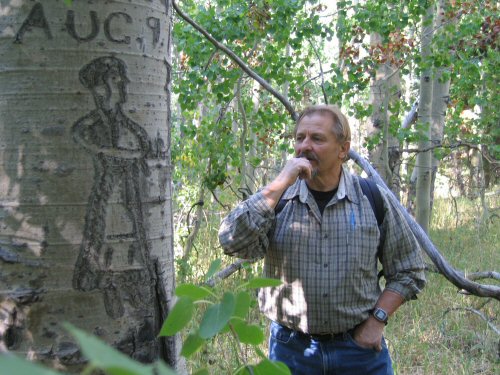 As primitive as life as a shepherd was, many of the carvings depict illusions of grandeur. "Some of [the shepherds] appear to have felt they were someone important - lords of immense mountain ranges and plains - since there was no one near to dispute their claim," Jose Mallea says in his book, Carving out History.  Others have all the poignancy of marks etched on to prison walls. One tree carving near Reno in Nevada reads: "If [shepherd] life is what the old-timers told me it was, my balls are carnations."  Another, carved in Euskara, the Basque language, says: "In Spain, they consider us great men, but here we are nothing."

"I've never gone out and not been surprised by the creativity of these carvers. Nature and time and a desire to communicate provided the means for them to transmit their thoughts and feelings," Dr. Bieter said.