Gernikako Arbola (the tree of Gernika in Basque) is an oak tree that symbolizes traditional freedoms for the Biscayan people, and by extension for the Basque people as a whole. The Lords of Biscay (including the early kings of Castile and Carlist pretenders to the throne) swore to respect the Biscayan liberties under it, and the modern Lehendakari of the Basque Country swears his charge there.

The tree of Gernika (Guernica in Spanish) is one of the sacred trees under whose shade the custom developed--and continues--that representatives assembled. The significance seems to have pagan or pre-Christian origins. These trees have a history representing various deities whose names appear on gravestones such as in Aquitaine Arixo deo ("God Roble"); Arteche deo ("God oak"). While there are several revered oak trees (e.g., the Malato in Luiando, tree Krutzia, the Sobrarbe, the Aretxabalagañe that of Abellaneda, Gerediaga oak of Durango, etc.), it is the one in the Basque town of Gernika that has gained wider significance as the modern symbol of Basque freedoms.

The known specimens or generations of the tree of Gernika form a dynasty. The "father," was planted in the 14th century, and lasted 450 years. This coincided with Basque self-government in this area under the Basque fueros or foral laws. As symbolic tree of traditional freedoms, no Biscayan, for example, could be arrested for crimes without prior notice to him. The ancient oak of Guernica, says Laborde in his account of Biscay, is a most venerable natural monument. 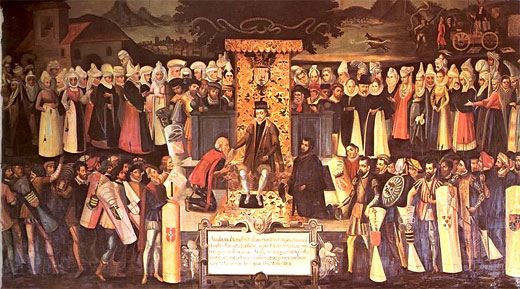 Ferdinand and Isabella, in the year 1476, after hearing mass in the nearby church of Santa Maria de la Antigua, repaired to this tree, under which they swore to the Biscayans to maintain their "fueros" (privileges).

The tree of Gernika came to the attention of the noted English poet William Woodsworth, who in 1810 had published his sonnet "The Oak of Gernika:"

OAK of Guernica! Tree of holier power
Than that which in Dodona did enshrine
(So faith too fondly deemed) a voice divine
Heard from the depths of its aerial bower--
How canst thou flourish at this blighting hour?
What hope, what joy can sunshine bring to thee,
Or the soft breezes from the Atlantic sea,
The dews of morn, or April's tender shower?

Stroke merciful and welcome would that be
Which should extend thy branches on the ground,
If never more within their shady round
Those lofty-minded Lawgivers shall meet,
Peasant and lord, in their appointed seat,
Guardians of Biscay's ancient liberty.

For various reasons, the oak of Gernika would go on to become the most famous of these sacred oaks. In the middle ages, the representatives of the villages of Biscay would hold assemblies under local big trees. As time passed, the role of separate assemblies was superseded by the Gernika one in 1512, and its oak would acquire a symbolic meaning, with actual assemblies being held (the current building is from 1833). 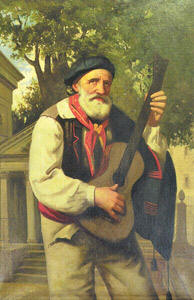 Notice of the Tree of Gernika grew in scope. The noted English poet William Wordsworth published a tribute in 1810 that spoke of it's "holier power." The Castilian poet Tirso de Molina wrote how the tree symbolized the rejection of tyrants. But it is arguably the Basque bard Jose Mari Iparragirre's (image at left of a painting in front of the sacred oak) song "Gernikako Arbola" that transformed the tree into a symbol for all Basques. He first sang the song in Madrid in 1853. Though it has many verses, it is the well known first stanza that has become the defacto Basque national anthem; the seven historical provinces have never been unified in modern times. At many a Basque-American festival it follows the singing of the American national anthem.

The known specimens or generations of the tree form a dynasty

The Tree of Gernika's Seedlings are around the world; below is a recently planted seedling in front of the Basque clubhouse in Chino, California. 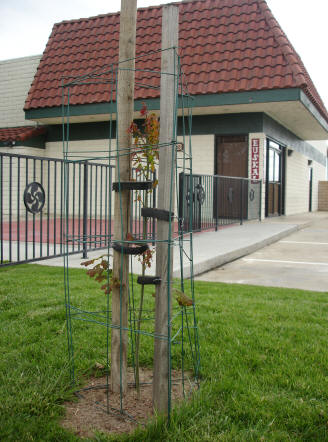