Pilota (Pelota) in its various forms is a more recent introduction into the pantheon of Basque traditional sports, and its popularity endures. N.A.B.O. supports efforts in various clubs to maintain this sport tradition, including sponsoring an annual tournament. 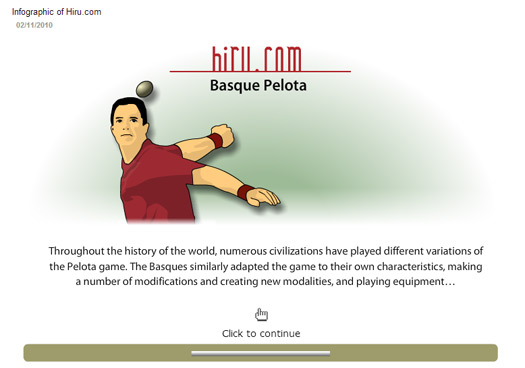 Handball is an ancient game. The Maya tribes of pre-Columbian America and the ancient Greeks and Romans knew versions of the game. The Romans spread it throughout western Europe. In the area of modern-day France, a variation of the Romans' game of pila emerged, and during the Middle Ages it became known as jeu de paume. Basque handball is a derivative of this game.

Andrea Navajero, a Venetian historian, traveled through the Basque Country in 1528 and commented on how all the males played this game. Indoor [courte paume] and outdoor [longue paume] versions endured into the 18th century, but following the French Revolution the games were nearly abandoned for being associated with royalty and nobility. Their popularity, however, endured in small circles. From the early outdoor version evolved our modern tennis; the indoor version meanwhile spawned English court tennis, and in the Basque Country it became the present manifestation of Basque handball. Despite its documented prevalence, it is odd that little is said of handball in Basque proverbs, old songs or family emblems. It is not because of prohibition; even priests could enjoy the game. Jonanes Lange commented in 1526 on his travels through Nafarroa [Navarre] that even priests were allowed to take part in what was soon becoming the national sport.

Originally played face-to-face, the introduction of more rapid rubber balls compelled a change in the game: returning the ball to a wall instead of over the net. Thus Basque handball was born. Three courts developed over time: the plaza laxoa or open court with only one wall at the front; the ezker pareta or left-wall court with one wall at the front and one on the players left and the trinketa or original court of the indoor form with four walls.

As the speed of the ball increased, so did the pain endured by the players who up to that time played with bare hands. This triggered the development of instruments with which to return the ball. Numerous variations emerged, including a wooden paddle or different sizes and weight [pala & paleta], different types of racquets [xare & frontenis], leather gloves [rebot & pasaka] and finally a curious glove and basket combination known as xistera or cesta that spawned jai-alai, remonte, rebote & joko garbi.