"Kantuketan" (In Quest of Singing) originated as part of an overall effort by the EUSKAL KULTUR ERAKUNDEA (Basque Cultural Institute) to reverse the trend of less singing in Basque. Their aim was to conserve a heritage and pass it on. This cultural organization of the Iparralde or north side of the Basque Country graciously offered to share their exhibit with the North American Basque Organizations, Inc (N.A.B.O.) and the Basque-American community. 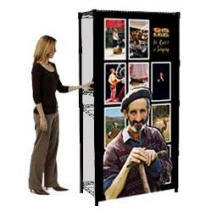 This is a sample of a NABO listening station; this version allows two people to listen to their musical choices. To find out about having this in your area, contact info@nabasque.eus.

Each listenig station uses the interactive program created by the EKE with and touch screen monitors with a wide assortment of musical samples from traditional tunes all the way to hard rock. Their shared images serve as side panels on each unit.

This exhibit is an ongoing effort to reconnect with our collective Basque memory and to promote Basque singing to a new generation. To bring you Kantuketan we have partnered with EUSKO JAURLARITZA--the Autonomous Basque Government of Euskadi--which has through the years demonstrated consistent support of efforts to promote Basque culture throughout the Basque Diaspora or Basque immigrant communities around the world.

For Basque culture to endure we'll need to find a viable balance between the fun of being Basque (e.g., festivals) and knowing something more about what being Basque is about. That is why NABO is following the motto Celebrate + Educate = Perpetuate.

To learn more about the exhibition click on: www.eke.org

NABO in conjunction with the Basque Government has developed three different photographic exhibits: one is of Basque musical instruments, the second is on Basque traditional houses, and the third from the previous touring exhibit of Basque culture.

This exhibit made its debut at the NABO Convention in Chino, CA (Aug. 2008). It will be rotated over time to different Basque communities.
Basque Musical Instruments Pamphlet (PDF)

This photographic exposition is a sample of the architecture found in the type of traditional Basque dwelling, and is suggestive of the strength, enthusiasm and the enterprising capacity of the Basque people.

The traditional Basque home has undergone numerous variations between the 16th century and our days, but it has always maintained certain common elements that define each region of the Basque country: houses located in the region of Zuberoa tend to be very austere, closed-in, lacking in ornamentation and with smooth rocks on the facade, while ones found in Bizkaia are quite open, with balconies stretching along their entire length and very elaborate structures of wood and masonry found at the ends.

Although some opinions suggest otherwise, these buildings are not poor or popular constructions. On the contrary, they were built with the most advanced techniques known at the time, as demonstrated by the manner of working the stone and the wood, two of their most basic elements.

Generally, in the oldest dwellings, the ground floor was occupied by the kitchen and bedrooms, separate from the stable area, although all these elements were in very close proximity. However, with the passage of time, the living quarters came to occupy the first floor. Many variations exist in this format.

The typology of the main entrance is also diverse: in regions close to the sea, due to the more mild climate, the entryway is an open space understood to be a meeting place, while in the area of the Pyrenees, there is no such space. The roof is gabled, with the ridge being perpendicular to the facade and with a southern orientation.

There is no one "typical" Basque home because of the regional variations. In the part of Zuberoa closer to the Pyrenees, they have double slopes on the roofs because of the snowfall. In the area near the Cantabrian region, the roof can have up to three slopes.

The way that the wood frameworks are treated is another very characteristic point that can be appreciated in this exhibit. In Goizueta (Nafarroa) these works take on maximum importance, as their construction coincided with times of economic plenty. The exposition reflects all of these characteristics, helping to broaden our understanding of this type of building which served as the core or central unifying element of traditional Basque society--the "Etxea."

This exhibition first debuted in 2006 and it has traveled to several Basque communities. Photographs include captions that serve as a means of informing the viewer about various aspects of Basque culture.

Below are thumbnail images (click to enlarge) of the various panels in this exhibit.

For more information on any of these exhibits contact: info@nabasque.eus