The origins of much mythology and legends started with the human desire to explain phenomena and actions that take place in the world. The Basque mind was rich with imagination when it came to creating different legends in response to the questions that came from observing nature and immediate surroundings. 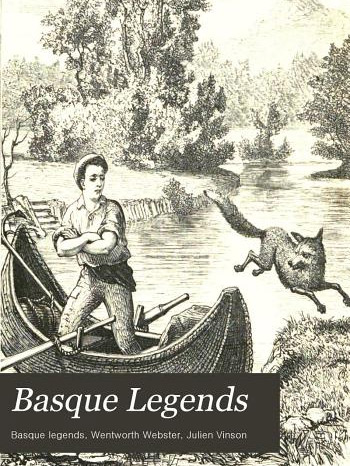 Wentworth Webster was an Anglican clergyman and scholar who lived in Donibane lohitzune, Lapurdi from 1869-1882. During this time he collected folk tales from the local people. With the help of Basque scholar Julien Vinson he published them in 1877.

Even most primitive Man felt the need to give meaning to the phenomena and natural cycles which conditioned his existence. He interpreted them, named them, found an explanation for them, and with these answers built up his own myths, legends, and religions. These formed the framework for his relation with nature and with anything else in his environment which was incomprehensible or supposedly magic.

Primitive Basque man was converted to Christianity very late. He was also all but cut off from other cultures by an inhospitable and very inaccessible geography. Thus he came to invent a vast collection of myths and legends which still exist today thanks to the great Basque oral tradition. For him the mountains and valleys developed an almost human significance, and in the bowels of the earth ran rivers of milk, out of the reach of mortals. Two powers ruled nature and their designs conditioned human life: the god of the firmament, "Ost" or "Ortzi" - equivalent to the Roman god Jupiter, the Greek Zeus or the Germanic Thor, and "Ilargia", the moon, a feminine force which emerged from the world of hidden things. "Ost" and "Eguzki", the light of the sun, belonged to the day, to the earth, since it was from the earth that the sun rose and to the earth that it returned every day. "Ilargia" though, belonged to the world of the deceased, of souls, to the hidden side of existence and nature. The Basques are very closely in touch with the moon and its cycles, and this figure appears in numerous myths, rites and legends. The female divinity of the ancient Basques was "Mari", the lady or gentlewoman who lived in the caves which reach deep down to the centre of the earth. Although she could take on different forms, she showed herself as a breathtakingly beautiful woman, and moved from one mountain to the next crossing the sky like a fireball. Any area which holds itself in esteem will have a model of the dwelling of Mari placed on its highest peak, for example the mountains of Gorbea, Anboto, Aketegi or the Aralar range...

Important characters somewhere between gods and men are the lords of the wood, the "basajaunak", uncommonly strong shaggy beings, who worked the land before man. Man gained the right to cultivate the land when San Martin, having won a bet, seized the seeds from the lords of the wood. Beside brooks and on shores, the "lamiak", or "lamiñak" comb their long hair with golden combs. These seductive creatures resembling mermaids - or who have bird's legs - can tempt mortals to their downfall. The house, "etxea" is the refuge and temple of the Basque people - the element which gives them their identity and their name, and which is preserved generation after generation. The home is protected against evil spirits by fire, laurel, ash leaves or dried thistle heads, "eguzki-lorea", literally, flower of the sun. The home, every home, was perpetuated - after the arrival of Christianity - in the church, where every family had its place reserved, the "yarleku", just as in a graveyard there is a family tomb.

The arrival of Christianity diminished the public circulation fo these beliefs, but they continued to be shared in private. When Jesus Christ, "Kixmie" arrived, the super-natural beings to whom the Basques, before Christianisation, attributed almost miraculous abilities and deeds, disappeared. And the beliefs began to become myths and legends.

Places Where Spirits are Seen in Basque Imagination

In the mountains which surround Oiartzun there are some mysterious circles of stones set into the earth. These are the work of Intxitxu, the invisible spirit who builds cromlechs.

In Ataun, if you go towards the openings of the grottos of Armontaitz and Malkorburu, you can see the strange prints of Irelu, the underground spirit who seizes anyone who bothers him. On the summit of Ubedi you can catch the strains of his song, mingled with the whistling wind.

Between the Peñas de Orduña and the caves of Balzola (Dima) and Montecristo (Mondragon), lives a dreadful snake, Erensuge, who attracts human beings with his breath, only to devour them.

Sometimes in Albistur and Zegama you may be surprised by a sudden jolt of the flock of sheep and at the same time the disturbing ehco of distant cries. This is how the Basajaun, the lords of the wood, announce their presence, thus warning the shepheres of the area that there is a storm on the way.

Kortezubi. Round about the caves of Santimamiñe, Sagastigorri and Covairada, you might come across a completely red-haired bull, cow, or calf with a fierce expression in its eyes. This is Beigorri, guardian of the houses of Mari, the principal spirit or goddess of Basque mythology. The animal is depicted in the prehistoric paintings on the walls of the Santimami&nitildee caves.