Joaldunak: Protagonists of Carnival in Ituren and Zubieta, Nafarroa

These two neighboring towns in the area of Malerreka, to the south of the Bidasoa valley in Nafarroa, pre-empt the official carnival dates and hold a unique carnival during the last week of January. The central act consists of a ritual involving the residents of both towns in an age old procession as they clang huge cowbells attached to their lower backs. What is this all about? Read on!

Midway between the Bay of Biscay and the capital city of Nafarroa, Iruna (Pamplona), in the heart of the northern Basque speaking region lies the valley of San Esteban of Lerin. Its three largest towns are Doneztebe (Santesteban), Ituren and Zubieta. It is in these last two towns that the inhabitants still regularly celebrate the age-old ritual of carnival with the impressive exhibition of the Joaldunak. For two days a year they march clanging their bells. But why?

To be honest, even the people who participate in this ritual ancient ritual aren't sure how and why it started for certain, because over the centuries the connection to its origins grew thinner. Most agree, however, that the ritual derived from an effort to "purify" their communities. But to get rid of what exactly? That's where there is more debate. 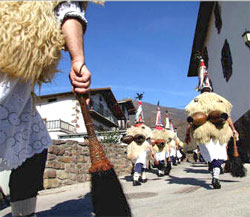 The Winter Solstice on either the 21st or 22nd of December is the shortest day of the year (least sunlight) in the Northern Hemisphere. It is in the midst of these short days that the Basques celebrate the Inauteria (Ihauteria) or carnival. An aspect of this season remains inextricably bound to meat in the Basque country. It is during this season that the Basque baserritarrak (farmers) butcher their pigs in order to make lukainkak (chorizo or sausage), odolkiak (morcillas or blood sausage); xolomoa (pork steaks), and those perennial delicacies of pig's feet and ears!

The connection with this meat ritual is most apparent when we look at the root of the term carnival or carne (meat). But unlike most other European carnival celebration, it does not seem that the Basque version originated with the "carne" as the central element.

The Basque term for carnival is inauteria or ihauteria which informs us a clue as to the original Basque perception of this season. Gorka Aulestia's Basque-English Dictionary defines the root inau in relation to pruning. Jose Dueso argues that the root of the term goes deeper than defining just an agricultural process. He translates inaute as sickness, vice or negativity. Similarly, Juan Antonio Urbeltz also writes about the significance of words with Inauteri and Aratuste, both meaning "the time of pruning" that references the tasks carried out in the month of February before the arrival of Spring. But why the pruning? Urbeltz points out it was done to at least try and minimize the arrival of damaging insects that would emerge. These activities, which possibly date from the Neolithic period, clean the trees and fields of insect larvae which are dormant but will soon come to life. Thus during the carnival season, there are still no insects but only larval that are left on branches to emerge in the springtime. Prune back the branches and you are able to remove much of the larvae that was left behind. 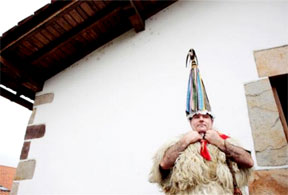 Juan Antonio Urbeltz has played a leading role in the world of Basque dance and culture for a generation, and his mark is clearly visible today, specifically in bringing about a profound change in how Basque dance groups think about dance and how they now present it. His experience and teachings provide us a unique opportunity to look into the world of folk dance to learn something more about the Basque people. He has played a pivotal--if not the central role--in a virtual revolution in the world of Basque dance: how it is prepared, portrayed, presented and understood.

Urbeltz's theory of the Basque carnival's origins explores the correlation between the Basque words for "disguise" and "insect." He notes that the Basque words for "disguise," zomorro, mozorro, koko, orro, mumua, etc., also mean "insect." He infers that the original origins of the costumes was to "insectisize" people; i.e., people "became" insects. This is consistent in a world of magic which characterized earlier worldviews. A parallel is the Native American "Buffalo Dance" were the person/performer "becomes" the buffalo. Urbeltz argues that "the disguises replace the spring insects which must be warded off. The exorcising of the insects," Urbeltz notes, "is seen when disguised callers go from house to house and are given offerings of money, wine or bacon. This means that the insects have received their payment, and will not be able to come begging a second time."

From this perspective, carnival characters such as the Joaldunak from the villages of Ituren and Zubieta are magical protection against these insects: "their weapons are a horsetail used as an aspergillum (holy water sprinkler) and great cowbells." Just as a horse uses its tail to ward off flies, the same function is performed by the cowbell, and it is the cowbells that distinguishes the Joaldunak. 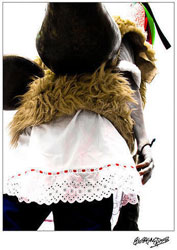 The inhabitants of Ituren and Zubieta have sustained a unique Basque carnival tradition. Until recently, it was almost unknown outside of the locale; nowadays they have "taken it on the road" so to speak and there have been efforts to replicate this by other groups. The focus of this carnival celebration are the Joaldunak. In Ituren they are dressed in a traditional peasant outfit: a simple shirt, blue pants that are tucked into the galtzerdiak or socks, and the rubber zatazak (originally leather). Around their waist the performers wear a white skirt, decorated with red or blue laces, that reaches the knees. Atop their shoulders, sown past the waist, they wear a coat of natural wool. Midway down the back, two small bells are attached, and then the two large bells are tightly fastened around the waist so that they stand out almost perpendicular in order to make them ring more easily. Around the neck they wear a colored scarf; atop their head they wear a two foot tall ttuntturoroa or cone-shaped hat decorated with laces and chicken feathers. In their right hand they carry the isopua, a short engraved stick to which is attached a portion of a horse's tale. One of the most important parts of the carnival, the mask, is no longer utilized. In an earlier time they wore a piece of black material that covered their faces down to their chests. The outfit of the Joaldunak of Zubieta is the same, except that they do not wear wool atop the shoulders but only around the torso.

Joaldunak is only one name for these processing characters. The word is descriptive of their task: the root of the term io or jo mean in Basque means to hit or play. Joaladunak therefore implies those who play or hit, in this specific case those who play the bells. The performers are also known by other names, such as ttuntturroak (from their hats) and Zanpantzar (from the medieval carnival character of the French saint Pansard). Theirs is a two-day ritual. Performers from both towns join together to take turns in the "purifying" ritual: so on one day they "purify" Ituren and the second day Zubieta.

The people of Ituren and Zubieta who maintain this annual tradition deserve credit for keeping this age-old ritual alive. So they might not be certain to the exact origins of the purifying ritual, but then again we are not sure about the origins of Euskara--the Basque language. Nevertheless, its worthwhile to keep it going and to sustain a particular community in a ritual that can bind them together.

Usually the last weekend of January participants from both towns join together to take turn working their "magic" is the recreation of age-old ritual.