One of the favorite drinks for Basques is their traditional hard cider. Believed to be one of their original drinks, its stronghold remains the northern part of Gipuzkoa with its many sagardotegiak or cider houses.

The earliest written records on cider making and drinking go back to the 11th and 12th century. Historically almost all Basque farm-houses had an apple-orchard (sagasti) and numerous Basque surnames and place-names are linked to the growing of apples or cider production. Traditionally gathering the apples was a communal activity. It is known to have been used by Basque whalers and fishermen on their long-distance trips to Greenland and Newfoundland in preference to water.

The origins of alcoholic cider takes us back to one of the earliest agricultural societies. It seems that it was a favorite beverage in Ancient Egypt, and then later for the Greeks. When the Romans moved into the Iberian peninsula two thousand years ago, they noted the presence of cider in the northern regions.

Some credit the Celtics with originating cider in Spain. The Arabs who later followed the Romans took control of Iberia and expanded the production of cider with their advanced agricultural techniques.

Like most things Basque, we do not have a certain origin for sagardoa among the Basques. Their neighbors in Asturias had it earlier. But even if Basques did not originate it, like many others things Basque—we took this and made it our own!

During the first stage of fermentation, the mix becomes a reddish, sweet and sticky liquid called "mosto." Basque cider is not decanted, thus fermentation doesn't suffer any delay. As a result of this the cider keeps its strength right until it's bottled. Basque cider contains around 5% alcohol. From the large casks it is later bottled, complete with some natural sediment because it is not filtered. It adds character!

Sagardoa is linked with a unique Basque musical instrument: txalaparta. With the notable exception of pilota, most traditional Basque sports originated from a form of work that Basques then converted into a contest or diversion.

In this case, the work was the smashing of the apples, and this was oftentimes done with poles. To make the work go faster, folks tapped out rhythms and thus the txalaparta was born! What is also oftentimes heard is trikitixa [Basque diatonic accordion] music.

Sagardoategiak also served as "home base" for many bertsolariak. In between the runs to the casks, the bertsolariak entertained the crowd with their improvised verses.

Spanish cider can be drunk anytime, just like versions in Normandy, Bretania, England, Germany, Switzerland, etc. because these versions are sweet. Basque cider, meanwhile, is best drunk when thirsty or eating.

The traditional menu for the sagardotegia ["cider house"] was BBQ steak, egg omelettes with cod, bread, salad and then "menbrillo" [quince], chesse and nuts for dessert. Today there are sit-down restaurants, but most early sagardoategia had people standing together around a table sharing the meal.

The cider houses were concentrated in the province of Gipuzkoa, though now with its new-found popularity sagardoa is being produced throughout the Basque country. In this early era people simply stood around tables and shared their meal. This made it more accessible to make the trip to fill the glass again from the barrel.

But what makes a Basque cider good?

Temperature must be controlled during the process of fermentation. It is important to wait for the right time to bottle the cider. It is said that the moon influences the process. There is no scientific explanation but this is believed to be important. Therefore most cider-makers keep in mind moon phases as well as temperature and wind. The ideal time to bottle the cider is when it is a quarter moon, it is not too cold, and the wind comes from the north.

Then finally, the most important word for the sagardozaile ["cider fan"]: "txotx!" The cider is poured in small quantities and quickly drunk before the natural carbonization disappears. Then it's back for more! 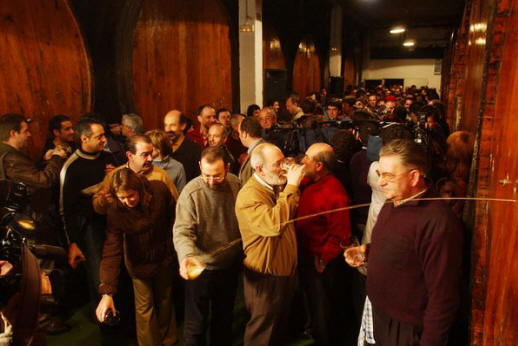 Drinking a Little From Huge Barrels, But Drinking It Often
By John Ward Anderson

ASTIGARRAGA, Spain It's a beautiful winter afternoon in Spain's Basque Country. Up a steep dirt driveway, an apple grove on one side and traditional wooden barns on the other, buses and cars are parked everywhere, but not a soul is in sight.

A low rumble and a faintly acidic smell come from some timber-beamed buildings up ahead. No mistaking: There are a lot of people inside, and judging from the whooping and hollering and unrestrained song, they are having a seriously good time.

Inside the Petritegi cider house, a group of newcomers arriving at about 3 p.m. is immediately embraced by a stranger and invited to join his group -- a band of 15 guys celebrating an upcoming marriage with several hours of indulgence at a traditional Basque gathering place.

An afternoon or evening at a cider house, which is similar in spirit to a Bavarian beer hall, is a seasonal ritual that begins in January with the opening of the first kegs of cider made from the fall's apple harvest. For the next three or four months, Spaniards flock to these family-run, communal establishments in the rugged foothills just outside the coastal town of San Sebastian.

The cider houses are steeped in tradition, chief among them being all the hard cider you can drink, accompanied by massive amounts of food and camaraderie.

"In France, they make a huge fuss over food and it's very sophisticated, but the Basque think cooking is a way of understanding life, and they don't talk about it, they simply celebrate it and take it for granted," explains Borja Mateo, 29, a lawyer and brother of the husband-to-be.

He yells to be heard over the background commotion of several hundred diners crammed around long, wooden picnic tables that seat as many as 50 people.

Around the building stand more than a dozen huge chestnut barrels, about 10 feet high and 15 feet long, each holding as much as 4,400 gallons of cider. People crowd around the barrels, demonstrating the essential cider house etiquette: Customers fill their own glasses, but only a little at a time, because the cider loses its taste if it is not consumed soon after pouring.

So while the glasses are large, and in theory could hold about three cups of cider, no glass has more than about an inch or two of the cloudy, yellowish liquid at the bottom. The alcohol content is about 6 percent, slightly more than a typical beer.

Another rule, explains Urko Torre, 27, who has worked at the Petritegi three years: When pouring, "You have to tilt the glass and break the cider on the side to oxygenate it" and give it some fizzle.

During the day, a competition evolves, with admirers watching people demonstrate the proper and most extreme pouring techniques. Some assume a catcher's crouch six or eight feet away, their glasses almost touching the floor, as the barrel tap is opened and a powerful, thin stream of cider arches into the room, to be captured artfully (or not) in the glass. Others employ a bowler's style: arm straight, glass by the ankle, then swinging it upwards along the stream in one smooth motion with an exaggerated follow-through.

The traditional cider house feast is delivered to every table, beginning with spicy chorizo-style sausage made with apples, then cod omelets, followed by cod fillets sprinkled with nuggets of garlic fried in pools of olive oil or buried under mountains of sautéed green peppers. About two hours into the meal come platters of huge juicy steaks, and finally plates of cheese and quince jelly with bowls of walnuts.

The meal is a study in constant motion. Diners must get up, all the time, to refill their glasses, because a key cider house rule is to drink a little, but drink it often.

Although the focus is on food and drink, the essence of the cider house experience is fellowship. Large groups come for celebrations, families have reunions, friends meet to catch up, and they all mingle together in a boisterous explosion of fraternity.

There are no plates. Everyone eats off the communal platters, sharing tables and food -- and sometimes knives, forks, napkins and glasses as well. Tables often erupt in spontaneous song and hoopla.

During cider season, Petritegi usually is sold out for lunch and dinner -- about 500 people for each sitting, according to Ainara Otano, daughter of the owner. The character of the cider depends on the blending of the apples and the weather. "There was a lack of rain this year, so the apples were drier. But the cider is good -- fruity and round," she said.

At about 6 p.m., thin streams of black smoke are drifting up from the chimneys outside. The singing and shouting continue as families and friends gather in the parking areas for a final picture. And the meaning of the traditional Basque song that fills the air achieves new clarity: