NABO is the sum of its parts, and those parts are the various Basque organizations that have joined together to preserve and promote the Basque heritage. We benefit when our members help to promote our federation. Below are various samples of NABO logos as well as a description of NABO.

Q: What is NABO?
A: The North American Basque Organizations (a.k.a. N.A.B.O.) was founded in 1973 with the intent of helping its member organizations to assist each other in the pursuit of the same objective: the perpetuation of "Basqueness" (Basque culture and identity).

N.A.B.O. was founded with the intent of combining the resources of Basque-American organization to preserve and promote the Basque heritage. We are not a stand-alone organization that accepts individuals as members. Instead our members are Basque entities or clubs that have formed locally and then joined us. We now count nearly forty entities and we are always looking for more members because that means that Basques are getting together in their own area to form new clubs.

Basques have been in the Americas at least since the time of Columbus. The origins of our current Basque communities, however, have more recent roots. The closer part of this story dates from the influx of Basques into the American West following the announcement of the discovery of gold in California. While a few struck it rich finding gold, everyone had to eat and that is what brought a good many Basques into ranching. That's what opened the door to the current Basque-American connection to the sheep industry.

A key part of these early Basque communities was the ostatua or Basque boarding house which served as a home away from home, a finding work network, a place to celebrate weddings and birthdays, and where Basque families usually gathered after a funeral. But with the last wave of Basque immigration that waned in the 1970s, the boarding houses began to fade away. Some of those switched into restaurants, many that are still serving their familiar menus. This disappearance of the boarding houses left a noticeable institutional void, and some Basques saw this and thus set out to organize Basque social clubs. These Basque clubs now served as new focal points of celebrating "Basqueness" by organizing regular events, dance lessons for youth, annual summer festivals, etc.

Some however saw the possibility of creating something on a larger scale; the creation of a federation of Basque clubs to pool resources and network ideas. This idea seems to have been spawned from the federation of Basque organizations in Argentina. Their federation, known as FEVA, left an impression on two Basques researching the global Basque Diaspora: Jon Bilbao and William Douglass. They raised that idea with some Basque-Americans and that is what made its way to Reno, Nevada back in 1973. In was there that a group assembled to explore the possibility of a questionable proposal, especially considering Basque history, of creating a federation of Basque clubs for North America.

The Basques had never really been united (excepting the Middle Ages when the kingdom of Nafarroa claimed the whole of the Basque region), neither in the Old Country nor in the New World. The Basque country, or "Euskal Herria," had never been "Zazpiak-Bat" (the seven provinces are one) representing a unified, self-conscious community. Euskal Herria most often referred to just the local region. Basques from Bizkaia in the South, for example, had little interaction with Basques in the northern province of Zuberoa.

This detachment was reflected in the Basque communities of the United States. Basques of Bizkaian descent in parts of Idaho and Nevada interacted little with the Basques of California which were largely northern or "French Basque." Thus when delegates from the Basque clubs of Los Banos and San Francisco, California; Boise and Emmett, Idaho; Elko, Ely and Reno, Nevada; and Ontario, Oregon gathered together, they were well aware that there was little if any communication among the various Basque clubs of the American West. They were attempting to cross the divide--real and imagined--between Basque-Americans, and their venture remained uncertain. Would "French" Basques and "Spanish" Basques join a federation to work together? Would individual clubs set aside competition in an effort to preserve and promote their shared heritage?

Now we look back and know that the answer is yes. But it was not an easy process.

Former NABO President Jean Leon Iribarren of San Francisco summarized the early obstacles that came from mutual suspicion. "We were afraid of each other" because we assumed "they [Basques from Idaho or Nevada, etc.] must be different." Further complicating matters was the activity of ETA during these years in Europe, and some Basques here thought the push for this new federation was somehow linked to this Basque separatist group. So after the original representatives took to the idea, they had the challenge of trying to now take it back to their communities. But Iribarren said that before long "we all realized we wanted the same things."

The original short term aim was to open lines of communication among the clubs. NABO has now surpassed that immediate goal.

NABO efforts are now numerous, from sponsoring an annual mus (Basque card game) that started in 1977, that was followed a couple of years later with the first of several world tournaments, and pelota tournaments. NABO recognizes the crucial role of youth involvement, and long ago began its two-week Basque culture summer camp for kids that began in 1977. These and other activities rotate from club to club each year. NABO has also forged a link with the autonomous Basque government which has provided various clubs with educational material, performers from the Basque country to enliven our festivals, and scholarships for studies in Euskadi. NABO's ambitious title of a North American federation finally found fruition over the last several years when Basque clubs from Canada joined.

So the delegates which assembled in Reno long ago, in an attempt to lortu or connect the various Basque clubs, could not have been sure of NABO's future. They were well aware that some might resist their efforts, but decades later NABO has proven itself a success. Long ago most Basque-Americans have set aside their Old World differences of "Spanish" and "French" to work together. The member clubs of NABO have realized that they all share one common purpose--to promote and preserve their unique cultural heritage--and they know that this can best be accomplished with a strong "lotura" (bond) to help one another.

Argitxu Camus, who recently had published her book on NABO notes that "NABO has done a lot of work, created many activities. NABO has grown from being 8 clubs to 35 clubs. It has created great communication amongst the clubs and now people are not reluctant to go to clubs in other regions, attend picnics, and send their children to Udaleku (Basque summer camp) in different locations. This last item is very important. Children learn that being Basque is 'cool' and that there are other kids out there like them. NABO has helped many children find their Basque identity and I believe this will determine the club's future."

To view an online version of NABO's story as written by Argitxu Camus Etchecopar, click on URAZANDI: NABO (Be patient for the download; it's a big file).
If the file does not open, you will need to download the free software to view it by clicking on free pdf viewer

Where the Pyrenees Mountains slope down into the Bay of Biscay of the North Atlantic (see map below) there lies a region which is home to Europe's "mystery people." We know these people as the Basques, but in their unique language they call themselves Euskaldunak (which means "one who speaks Basque") and their ancient homeland they have traditionally termed Euskal Herria ("Land of Basque"), or more recently Euskadi. It is comprised of seven traditional provinces that bridge the border between Spain and France. The people and their language are mysterious because there are more questions than answers. They are neither Spanish nor French in origin: long before the precursors of the modern Spanish and French people--the Indo-Europeans--the Basques inhabited this small corner of Europe. Their unique language they call Euskara. It is like no other language spoken in Europe--or the world.

The Basques were among the earliest Europeans in the New World coming with Columbus and perhaps even before as whalers. They later became prominent in the history of the early Americas--North and South--leaving many place names of Basque origin. With the discovery of gold in 1849, the Basques, as others, made their way to California in larger numbers. Few found instant riches and instead turned to other forms of labor and commerce. Basques soon found a place in the thriving cattle market that ventured to feed the swelling population of California. When a disastrous drought decimated the California cattle herds, many Basques turned to raising sheep and that is what produced the link with Basque sheepherding that is synonymous with many Basques though ironically, most who came here had little experience raising sheep. But the sheep business was just one route, and soon Basques found themselves in various occupations.

Basques in the Americas have embraced their new home where they strive to retain their unique heritage. There are many Basque communities large and small throughout North America and each one usually holds an annual Basque festival to which all are invited. There you have a chance to catch a glimpse of the Basque Country. 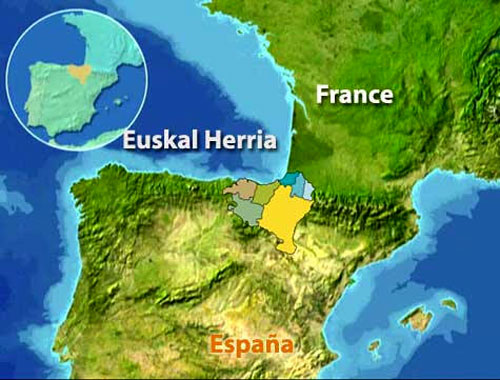 Euskal Herria - the homeland of the Basques in Western Europe 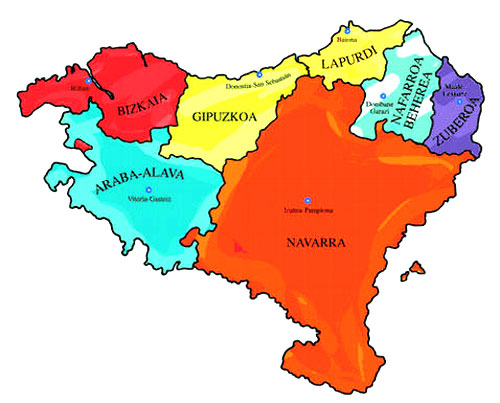 French side or Northern Basque Country known as Iparralde: Labourd (Lapurdi), Lower Navarre (Baxe Nafarroa) and Soule (Xiberoa) are part of the Pyrénées Atlantiques département (which it shares with the Béarn region). 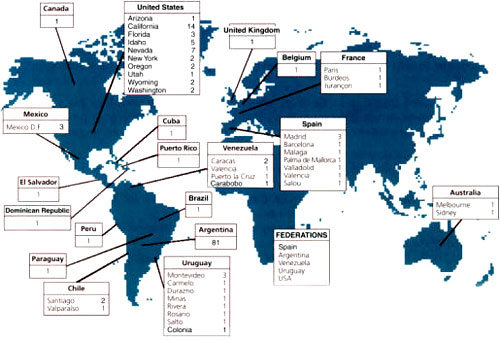 Basque organizations around the world (based on those registered with the Autonomous Basque Government of Euskadi).

Sizes of actual images are noted below each thumbnail. To save, right click and select "save as."