Picon Punch: The "Basque Cocktail" of the West

What comes as news to many Basques and others is that the Picon Punch is the "Basque cocktail." But in some areas of the American West, that's its designation. It's one of many instances of Basques adopting something and making it their own.

This story is reproduced here in case it is re/moved; it originally was posted online at The Atlantic at http://www.theatlantic.com/doc/200909/punch dated September 2009 as written by Wayne Curtis.

How the West Was Drunk
by Wayne Curtis

SOME DRINKS TASTE different when consumed in their natural habitat. The Picon Punch—an assertive, tart, and largely forgotten cocktail—is one of them. And its habitat happens to include the bar of the Noriega Hotel in Bakersfield, California, one of a handful of old Basque establishments clustered around the railroad tracks in the back of town.

The Basques have a long history in the American West, dating to the conquistadors. A great many immigrated from Spain and France to tend sheep around the Sierras and Rockies, and today you can find pockets of Basque culture wherever there were once a lot of sheep. The Basques who came to Bakersfield typically arrived by train, and they'd lodge at one of the local boardinghouses until grazing season. The Noriega, which opened in 1893, is the last to take in boarders. Older Basques still gather here to drink and eat and play cards. Meals are served boardinghouse style in an austere dining room, with everyone seated at long tables laden with platters of beef stew and pork chops and bottles of red wine.

But what lured me here was the Picon Punch. The early history of the drink remains murky, but it appears to be a Basque-American concoction, without antecedent in the old country. The punch has some variants within its broad range. But it's usually made with grenadine, club soda, a float of brandy, and Amer Picon, a bitter French aperitif made with herbs and burnt orange peel. I'm told in some Nevada bars it's served in a mug, rather than the standard old-fashioned glass.

I met up with Steve Bass, a retired teacher who writes about Basque history and culture, and we ordered our Picons at a long bar of time-worn wood. The decor here consists of a few romantic illustrations of Basque country, some old photos, a clock, and an ice machine. A side door leads to a handball court, and the front wall is composed largely of glass bricks, through which a desert sun glares like a bank of stadium lights, casting long shadows. Punches in hand, we sat with Bass's wife, Judy, and her father, Gracian Errea, who is 89 and a retired farmer and sheepman. We were soon joined by Jean Arrayet, a former shepherd who arrived here in the early 1960s and who told me that the first English words he learned were son of a bitch. More stories were told: about tramping with flocks 300 miles through the Sierras, about finding rattlesnakes in sleeping bags, about living in a tent all summer and cooking meals over fires of dried cow dung. There was also discussion of how to castrate sheep.

When the talk turned to the Picon Punch, they all shook their heads gravely. The drinks, they lamented, just weren't as good as they used to be. I first ascribed this to the old the-ground-you-kids-sleep-on-isn't-nearly-as-hard-as-the-ground-we-slept-on worldview, but it turns out there's some merit to this argument. The essential ingredient—Amer Picon—is actually no longer available in the U. S. (though you can still find it in France). The Picon Punches at the Noriega were mixed, as many are today in the West, with an American-made substitute, called Torani Amer, which one of the party noted was made by the same company that manufactures flavorings for coffee shops. This information was not offered as an endorsement. 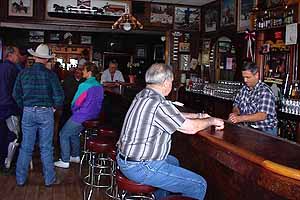 The Picon Punch is not universally served at Basque restaurants as the "Basque drink;" you have to find the right places. It is characteristic to just a few areas of the Basque- American West like central California and northern Nevada.

After lunch, we retired to the bar for another punch. The proprietor sized us up and asked if we'd like to sample a homemade version of Amer Picon, which an unnamed visitor had left off a few days earlier. It was in an old rum bottle, and labeled with a handwritten yellow Post-it note. We uncorked it and sniffed. It was far more complex and layered, more redolent of caramelized orange, than the Torani. She made us a couple of Picons, and everyone around our table sipped. Heads nodded approvingly. A small quiet descended, as if a door had opened to a lost idyll. At that moment, I believed this was the most delicious drink I'd had in a year.

I've since been keeping an eye out for Amer Picon in liquor stores with dusty shelves, and reading detailed accounts about how to make it. But drinking a Picon Punch at home and far from sheep country seems akin to putting a rare bird in a cage and trying to make it sing. Some things, I'm pretty sure, are better left in the wild.

The Picon Punch--which is known in some corners as the "Basque cocktail," is based on a bitter orange spirit called Amer Picon made of bitter oranges, gentian and cinchona. It was invented by a Frenchman named Gaëtan Picon in 1837, and the drink evolved from a French aperitif and stomachic on its own through the hands of the Italians and apparently into the hands of the Basques, especially in the earlier Boarding Houses and then the Basque-American restaurants. The thing about the original Amer Picon is that it's almost impossible to get in the States these days, and it's original formula was altered. That's when the transition to Torani Amer took place. There's also the homemade concoction called "Amer Boudreau," developed by Seattle bartender Jamie Boudreau.