Basque Saints and Epithets of the Virgin Mary

This is a tentative list of Basque saints. The primary characteristic is their birth in a part of the Basque Country. Some identified with being Basque and they spoke Euskara, while with others it is less certain. 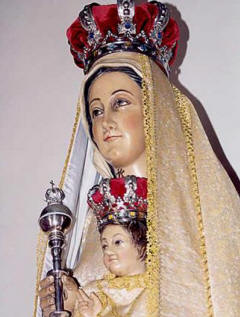 Basque given names derived from epithets of the Virgin Mary

This is a table of given names based on Roman Catholic epithets of the Virgin Mary. Such names are popular in Iberian culture, mainly as women's names. They may derive from feast days celebrating the life of Mary (Asuncion), from miracles attributed to her (Pilar), from abstract qualities (Mercedes) or from places associated with a certain cult or image of Mary (Lourdes).

Elko, NV – July 2012—The Balentin Berriotxoa (originally in standard Basque Berrio-Otxoa) Santuaren Kofradia of Elorrio, Bizkaia has donated a statue of Saint Balentin Berrio-Otxoa to be shared by the Basque communities of Elko and Mountain Home, Idaho in hopes of establishing a lasting tradition of honoring the Basque Saint as well as strengthening bonds with the Saint´s birthplace of Elorrio in Bizkaia, the Basque Country. As a part of the Elko Euzkadunak Club´s 49th National Basque Festival on July 6, 7 and 8, 2012, mass being held at the Elko City Park at 11 a.m. will introduce the life of Saint Balentin Berriotxoa, patron saint of the Basque province of Bizkaia, and will receive the statue recently brought to the American Basque communities from the Basque Country. 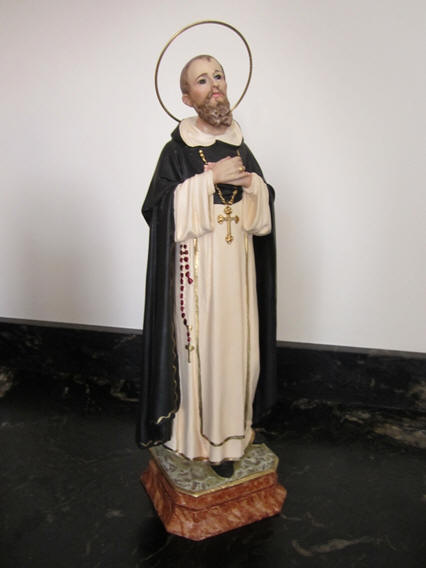 Saint Balentin Berriotxoa statue donated to the communities of Elko and Mountain Home, Idaho (the latter the home of some of his U.S. relatives).

Born in 1827 in the town of Elorrio in the Basque Country, Balentin Berriotxoa entered the Dominican order of priests and set out for Asia to fulfill his life work. He was later ordained a bishop in Ninh-Cuong Vietnam. In 1861, he was beheaded in Vietnam, along with 116 other martyrs, for refusing to renounce Jesus. Pope Jean Paul II canonized him as St. Balentin Berriotxoa at a ceremony in Rome in 1988 in which a group of Berriochoa relatives from Idaho were in attendance.

The project to incorporate Saint Balentin Berriotxo into the U.S. Basque community festivals was inspired by the late Bishop Karmelo Etxenagusia, Auxiliary Bishop of the Diocese of Bilbao and native of Iurreta, Bizkaia, whose wish was that there would someday be a presence and devotion to the Saint here in the U.S. which he saw as fitting since there are so many Catholic Bizkaians and descendants of Bizkaians in the Northwestern United States. 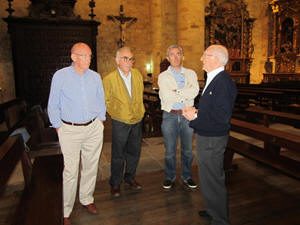 Friends of Bishop Etxenagusia have pursued his idea by carrying out research on which Basque communities were the most interested in joining the effort and with great satisfaction, the statue, which had previously travelled to Colombia to serve as a model for a rendering of the Saint, has been hand delivered to Elko for the 2012 festival weekend. The Basque clubs of Elko and Mountain Home, the Elko Euzkaldunak and the Euskal Lagunak Club, look forward to working out the details of sharing the Saint Balentin Berriotxoa statue and creating lasting traditions.

Following the tradition of the Basque Country, Chino area Basques have adopted their own patron saint, Mixel Garikoitz, who they celebrate in conjunction with their annual festival Labor Day weekend.

Mixel (Michael) was born on April 15, 1797, the eldest son of Arnold and Gratianne Garicoits. They were poor and Michael was hired out as a shepherd boy to a farmer. His desire to become a priest always met with "No, we are too poor" by his parents, but his grandmother talked the matter over with the parish priest. Through his efforts Michael earned his expenses for college by working after school hours for the clergy and in the bishop's kitchen.

In December 1823 he was ordained priest in Bayonne cathedral by Bishop d'Astros. Michael's first assignment was at Cambo where he remained two years. He did much to revive religion there, combat Jansenism by the custom of frequent communion as well as by introducing Sacred Heart devotions. Father Garicoits' next call was to a professorship in the senior seminary for priests at Betharram, and then to be superior. In 1838, Father Garicoits drew up a constitution largely based on that of the sons of St. Ignatius. Like them, his missionaries were to take life vows and to spread far and wide. Associates gathered round him at Betharram, and all seemed promising, when the bishop disapproved of his idea of founding a new congregation. Not till 1852 was the community allowed to choose its own superior, and even then it was tied down by regulations which hampered its activity. Father Garicoits submitted, but with a heavy heart.

He died on Ascension day, May 14, 1863. Fourteen years later the Society of Priests of the Sacred Heart of Betharram was approved by the Holy See on the lines the founder had laid down. St. Michael Garicoits, who was at one time spiritual director of the Basque house of the Daughters of the Cross at Igon, received much encouragement in his foundation from St. Elizabeth Bichier des Ages, and he was all his life a close friend of her congregation in the Basque country. Both of them were canonized in the year 1947. His feast day is May 14th.