Euskara is an endangered language. Generally, any language that is spoken by less than a million people today is in danger of soon disappearing. Even generous estimates of the number of Basque speakers leaves the number well below this mark.

In English we use the word Basque to describe both a people and a language. This is derived from the French variation (the Spanish is vasco) of "Eusk." In their own language, Euskara, Basques refer to themselves as Euskaldunak. This is one of the rare instances of a people defining themselves by their language. Euskotar, for example, means ethnic Basque and can be applied to any Basque whereas Euskaldunak is specific to those who speak Basque.

Where does Euskara come from?

According to the late Larry Trask, an Euskara specialist, it doesn't really "come from" anywhere -- it's just been there for a very long time. The ancestral form of Basque was introduced into western Europe long, long ago--at least thousands of years ago, and maybe even tens of thousands of years ago. Nobody knows. All the other modern languages of western Europe arrived much later.

Is Basque related to any other language?

No, responds Trask. The relatives that Basque once had have died out without a trace. Basque absolutely cannot be shown to be related to any other language at all. Trask declares that some people will try to tell you differently, but they don't know what they're talking about, and the great majority of them don't even know anything about Basque.

The first book written in Euskara was by Bernard Etxepare in 1545. In it he included this plea:

"Let's take Euskara out, to the plaza, dancing, and to the whole world."

Euskara as a secret passage

One of the more profound exhibits at the Guggenheim Bilbao Museum is one designed by Jenny Holzer (b. 1950, Gallipolis, Ohio, U.S.A.). It consists of columns of scrolling words in English with red lights, that when first seen appear to be up against a dark wall. But if one moves closer, you find that the nine LED light columns are actually double-sided and in front of the wall. Stepping through the light columns you turn to find scrolling words on the back-side of the columns, but this time in blue lights and in the Basque language (as seen in the image below). 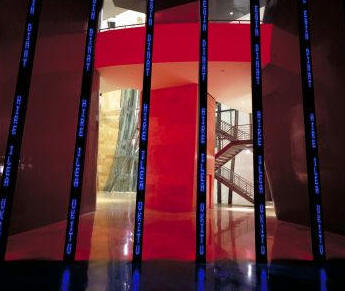 Note that this article does not presume to know what exactly the artist, Jenny Holzer, intended to relate with this work; instead the exhibit is taken as an metaphor for the place of Euskara.

It is a perfect metaphor for Basque culture because in many ways the world of the Basques remains hidden from view. To ultimately discover that world one needs to know Euskara or the Basque language.

Now this statement is controversial, because some might be offended that their "Basqueness" is being called into question, while others might feel bad that they don't know Basque. For the former, the response is a matter of reason. Many a visitor or tourist to the Basque country might know they are in the Basque country and take in some of its charms, but there is larger world that the non-speakers of Basque are likely to miss. Just like the example above, one might think they have seen--or know--all there is about the Basque Country, and that the "lights end at the wall." But if one moves closer and passes through the metaphorical columns into the Basque-speaking world, things show up, in a matter of speaking, as a different color. The reason for this, is that some things in life just don't translate. Each of the world's languages have their own internal dynamic. Ask anyone who is more than monolingual and nine of ten will tell you the same: each language carries its own unique, cultural attributes; i.e., we communicate (i.e., relate, connect, understand) differently with people in different languages, and it is not just because the words sound or are spelled different.

Okay, I'm convinced. So how do I learn Euskara?

For the latter--those who feel bad that they don't know Basque because they too would like to know that "hidden world," well there is good news for you! There's never a time like the present to follow through on what you've always told yourself: "I wish I knew Basque." There are opportunities out there now that make learning easier, including classes at Basque clubs and now an online option as well.