A Basque singing tradition is Saint Agatha's eve (Santa Ageda bezpera in Basque) on February 4. Singers go door to door throughout towns. Homeowners can choose to hear a song about her life, accompanied by the beats of their walking sticks on the floor or a prayer for those deceased in the house. In exchange, the home-owner could donate food to the roaming choir. This song has varying lyrics according to the local tradition. 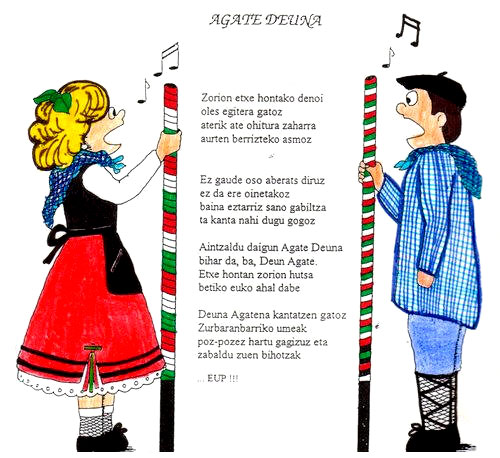 The Story of Saint Agatha 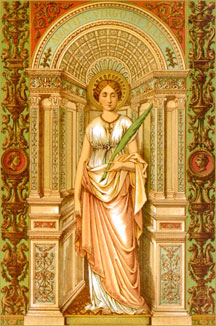 Saint Agatha of Sicily (died traditionally 251) is a Christian saint with her feastday on February 5. Agatha (Ageda in Basque) was born at Catania, Sicily, and she was martyred in approximately 251. She is one of seven women, excluding the Blessed Virgin Mary, commemorated by name in the Canon of the Mass.

She is the patron saint of Catania, Molise, Malta, San Marino and Zamarramala, Spain. Among other things, she is also the patron of martyrs, wet nurses, fire, earthquakes, and eruptions of Mount Etna.

In the legend of her life, we are told that she belonged to a rich, important family. When she was young, she dedicated her life to God and resisted any men who wanted to marry her or take her virginity. One of these men, Quintian, was of a high enough rank that he felt he could force her to acquiesce. Knowing she was a Christian in a time of persecution, he had her arrested and brought before the judge - - himself. He expected her to give in to when faced with torture and possible death, but she simply affirmed her belief in God by praying: "Jesus Christ, Lord of all, you see my heart, you know my desires. Possess all that I am. I am your sheep: make me worthy to overcome the devil."

Legend tells us that Quintian imprisoned her in a brothel in order to get her to change her mind. Quintian brought her back before him after she had suffered a month of assault and humiliation in the brothel, but Agatha had never wavered, proclaiming that her freedom came from Jesus. Quintian sent her to prison, instead of back to the brothel -- a move intended to make her more afraid, but which probably was a great relief to her. When she continued to profess her faith in Jesus, Quintian had her tortured. He refused her any medical care but God gave her all the care she needed in the form of a vision of St. Peter. When she was tortured again, she died after saying a final prayer: "Lord, my Creator, you have always protected me from the cradle; you have taken me from the love of the world and given me patience to suffer. Receive my soul."

Because one of the tortures she supposedly suffered was to have her breasts cut off, she was often depicted carrying her breasts on a plate. It is thought that blessing of the bread that takes place on her feast may have come from the mistaken notion that she was carrying loaves of bread.

Because she was asked for help during the eruption of Mount Etna she is considered a protector against the outbreak of fire. She is also considered the patroness of bell-makers for an unknown reason--though some speculate it may have something to do with the fact that bells were used as fire alarms.