The North American Basque Organizations held its annual Fall meeting on November 5th in Homedale, Idaho co-hosted by the Txoko Ona Basque Club and the Ontario, Oregon Basque Club.  President, Philippe Acheritogaray welcomed everyone to the meeting, followed by a rundown of the day’s events by John Lejardi, Txoko Ona’s club president. Delegates attended in person and via Zoom with 34 clubs being represented.  Also attending were Benan Oregi, from the Basque Government’s Directorate for the Basque Community Abroad, and Iñaki Arrieta, head librarian at the Jon Bilbao Basque Library. Benan updated us on the upcoming Gaztemundu Program, as well as on the status of 2022, and 2023 Basque Government Grants, among other points of interest, while Iñaki updated us on the latest activity in the library.  Other highlights of the meeting included updates on the 2023 Udaleku, and Ateak Ireki opportunities for our youth. Please check with your club’s delegates to stay apprised of registration dates etc. for these programs.  The fall meeting is also the time of year that the NABO Euskara Coordinator and Facilitator are appointed. After some deliberation, Kate Camino will continue as NABO’s Facilitator, with the valuable assistance of Lisa Corcostegui, and we are very happy to welcome Edurne Arostegui as the new Euskara Coordinator who is taking over for Sonia Castañon who has served in that capacity since 2019. On behalf of everyone at NABO, we extend a very heartfelt Eskerrik Asko to Sonia for the energy, and effort she has contributed for the good of NABO’s Euskara Program.  As part of new business, Philippe recommended renaming NABO’s Bizi Emankorra, Lifetime Achievement Award, after NABO’s first president, Al Erquiaga, which passed unanimously. On behalf of everyone at NABO, Mila esker handi bat to Txoko Ona and the Ontario Basque Club for welcoming us to your wonderful venue, as well as treating us to a phenomenal lunch!

After the meeting, everyone returned to Boise in order to attend the Euzkaldunak’s Mortzilla Dinner/Bingo Night.  Over 1,000 people were served in two separate seatings, where folks not only enjoyed etxeko Mortzilla, but also chicken, Bacalao, a variety of sides, dessert and wine.  Zorionak Euzkaldunak! After dinner, everyone moved upstairs for the Bizi Emankorra lifetime contribution award presentation to Miren Artiach, NABO founding member, and pillar of the Boise Basque community.  Video of the presentation, along with bertsos sung by Todor Azurtza can be found here. Miren’s acceptance speech is also available here. Again, on behalf of everyone at NABO Zorionak Miren and Eskerrik Asko zure ahalegin guziagatik.  If it were not for people like you, we wouldn’t be here today. 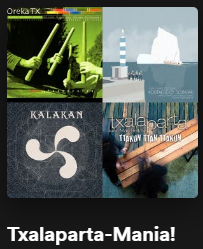 Thanks to NABO’s Music Programs Director, Mikaela Goicoechea, we have a new Spotify playlist dedicated to Txalaparta, entitled, “Txalaparta-Mania!”, featuring traditional and contemporary use of Txalaparta.  If you are not familiar with Txalaparta, more information on the instrument is available here. On egin, eta mila esker Mikaela!