Click on the icons to hear and see a sample of txalaparta. 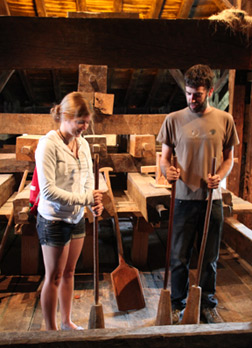 Like traditional Basque sport, this instrument originated from a form of work that was transformed into recreation. The txalaparta began as the means of crushing apples to make cider, and that monotonous work was somewhat alleviated by striking rhthym.

The txalaparta, depending on the time in history and the place, has changed taken on different appearances. However, the traditional txalaparta generally fits the following description: two upside-down baskets, chairs or benches are placed on the ground as supports. On top of these some type of insulation material is used-maize leaves, dried grass, old sacks, etc. A board approximately two metres long, twenty centimetres wide and six centimetres thick is then laid lengthwise on top of the supports about one fifth of the distance from either end.

Four sticks are used to strike the instrument, the length and width of which vary depending on the origin of the instrument. The strikers used by the Zanzibar family from Lafarge are 52 centimetres long, the ones used by the Goikoetxea brothers from Astigarraga are 60 cm long and the ones used at the Billandegi farmhouses, 88 cm. The strikers in all three cases are trunco-conical shaped (tapered cylinders).

The txalaparta is played by two musicians. Each player holds a striker in either hand in the upright position and uses them to strike different parts of the board (placed horizontally and insulated so as not to lose resonance). The music is created by both players working in unison. Depending on the town or region, each of the has a special name: "ttakuna" or "tukutuna" for one of the musicians, and "herrena" or "urguna" for the other.

These different names indicate the function of the musician. One player establishes order and balance, while the other tries to break the pattern, creating disorder and imbalance. This goes on back and forth, setting and breaking the rhythm throughout the session; the pace gradually quickens until an unbreakable order and balance is attained. 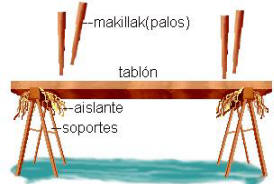 Although the norms associated with playing the txalaparta are somewhat strict, the players themselves are free to use their imagination and their improvisation abilities. One of the musicians plays the part known as ttakun or tukutun, which consists of two strokes repeated over and over again. The other one plays the herrena or urguna part, the sound that fills in the space between the first player's double strokes. The herrena player is in charge of all the games and changes, adding double strokes, single strokes, skipping strokes entirely, or a combination of all three.

There are also other ways of making music, such as playing with timbre, tone, intensity of sound and speed.

Where was the txalaparta played?

The instrument has always been found in rural environments and is closely associated with a rural lifestyle. In the Sixties very few txalaparta duos were still to be found and those that did exist came from the above-mentioned San Sebastián-Urumea region, specifically such places as Lasarte, Hernani, Astigarraga, Ergobia and Altza. Although all of the information we have on this instrument came from these places, we shouldn't overlook the fact that our researchers and principal musicians were Migel and Pello Zuaznabar from the Sasoeta farmhouse in Lasarte and the Goikoetxea brothers, Asentsio and Ramón, from the Erbetegi-Etxeberri farmhouse in Astigarraga.

When was the txalaparta played and on what occasions?

The instrument is associated with local tasks and celebrations, but always with a festive overtone. Some of the San Sebastián-Urumea residents still with us today actually experienced this custom in their lifetimes, when txalaparta music was played to celebrate the production of apple cider. After the process of crushing the apples, the people who had helped make the cider would celebrate by putting together a large dinner. Things would get livelier and livelier, with the help of the slightly alcoholic amber liquid, and the txalaparta would eventually be set up. It was usually assembled out of doors, right near the farmhouse entrance, and a duo would pick up their strikers and start playing. This marked the beginning of 'phase two' of the party. Up until that point the only people present were those connected with the farmhouse and cider making; when the sound of the txalaparta was heard, the neighbours would stop by to take part in the festivities, especially the younger ones from the surrounding farmhouses.

It is said that the txalaparta could be heard from five kilometers away, and many of the people living within the five-kilometer radius would join in the celebration.

According to Ramón Goikoetxea, "The board we would set aside for playing the txalaparta when it came time to crush the apples in the press tended to be wet and soggy. So, we'd put it up on the roof so that it'd dry out and sound better. The people would see it up there and knew that it meant there was going to be a party soon. Everyone would keep an eye on that board, even though they knew when the next party was supposed to be held at the Erbetegi-Etxeberri farmhouse. And so the party went, a mixture of frolicking and dancing, drinking cider, and playing and listening to the txalaparta until dawn."

As we can see, all-night parties are not only a thing of today. And those all-nighters were probably not just any kind of party, since the nights at that time of year are long and hard. To help get a feel for the festive environment, R. Goikoetxea offers the following anecdote: "Our grandfather would bend over backwards, limbo style, and pass under the board while my brother and I played."

Migel Zuaznabar recounted similar stories having to do with cider parties, and to better understand the atmosphere surrounding the txalaparta he told us of another event from that time. One evening a group of draftees got together to have dinner at a restaurant in Lasarte. When the dinner was over, they decided to play the txalaparta but didn't have the materials on hand to put one together. So, what did they do? They dismantled the booth at the San Sebastián-Bilbao railroad underpass, set up a txalaparta with the 'borrowed' materials and played to their heart's desire.

Sometimes other instruments are played along with the txalaparta. The Zuaznabar brothers from Lasarte, for example, play the horn before their sessions.

There are other curiosities associated with the txalaparta. In all of the written references and all of the live events we have had the opportunity to see, the txalaparta is always played at night. This goes for cider celebrations, as well as weddings and other types of festivities. The only exceptions are performances given in recent years by veteran txalaparta players, events set up for exhibition purposes which do not take place in their 'genuine' context.

This aspect deserves further study. It does not appear to be a mere coincidence that the same phenomenon occurs with other traditions bearing certain similarities to the txalaparta found the world over.

TOBERA: the metal variation of the Txalaparta

Although in terms of appearance there are certain differences, the most common type of tobera is made of a steel rod approximately a metre and a half long, which is suspended on either end by ropes. Four small iron bars 30 centimetres long are used to play the instrument. 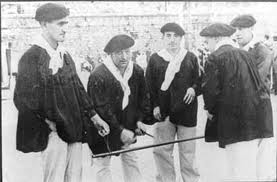 The tobera is played by two musicians, each with one small iron bar in each hand. The duo play a similar give-and-take game as with the txalaparta. In the area of Lesaka, the person
setting the rhythm is called the "bia" and the other musician is called the "pikatzailea" or "errepikia" (or "bata" in the Oiartzun area). A lyricist or "bersolari" intersperses the sound of the tobera with his sung verses, sometimes singing old traditional verses associated with the tobera and other times new verses improvised on the spot.

This "variant" of txalaparta (whose name is often confused with that of txalaparta) is not only a musical instrument, but an event associated with a celebration.

Toberas were used in similar types of events as those associated with the txalaparta, although its main function in more recent times, both in the Lesaka and the Oiartzun areas, was connected with weddings. In Lesaka it was also played on the "Día del Pregón" (public announcement day) and in Oiartzun at nuptial ceremonies.

Events and celebrations of this type would frequently take place around lime deposits. The people would come to process lime, and at night, gathered together around the bonfires beside the lime kilns, would celebrate the so-called "karobi eztaya" festivity (literally, lime wedding). The event included dinner, bersolaris, irrintzis (high-pitched gleeful howls typically shouted out on feast days and at dances), music and often times txalaparta music.