In search of Udaleku Group Photos

Udaleku, or NABO’s Basque summer camp for kids, is arguably one of its most important and successful initiatives.  The program, that began in the late 70s, has thrived and today hosts on average 100 children every year from Basque clubs all over the US to learn more about their Basque heritage, while making friends and getting to know different Basque communities at the same time.  We are reaching out today to see if participants in programs in 1980, 1983, 1984, 1986, 1987, 1988, 1989, and 1995 would have a group picture of those camps. If we could track these years down, the NABO Udaleku photo archive would be complete.  If you happen to have any of these, please scan them and email to NABO webmaster, Lisa Corcostegui, so she can add them to the website.  Thank you in advance for your help! To see the collection so far, click here. 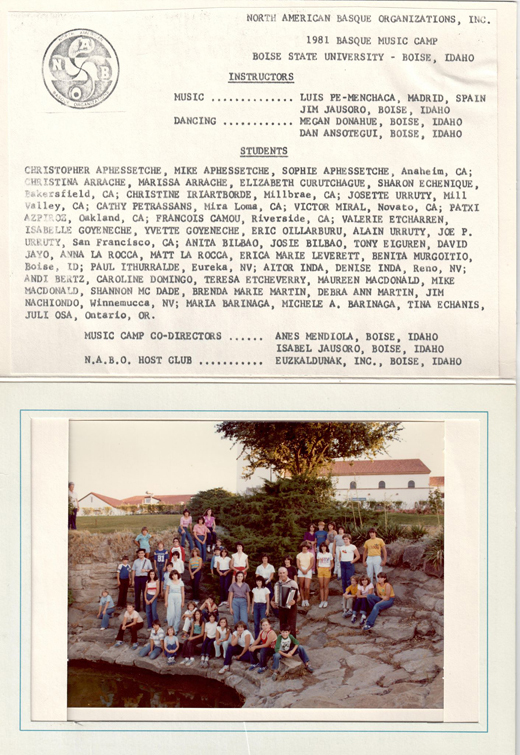 Film of the Month

The NABO Filmategi is featuring Arriya La Piedra (The Rock) as the March Movie of the Month.  Directed by Alberto Gorritiberea, the film tells the story of two families living on the border of the Basque Country, and three young lovers. To watch the trailer, click here.  To learn more about other films in the catalog, click here.

In an effort to support Korrika 21, the biannual race in favor of the Basque language, the Etxepare Basque Institute and the AEK cooperative launched a contest for Basque students all over the world with first prize being a trip to the Basque Country complete with a stay at a Barnetegi to continue their Basque language studies.  Out of all of the entries received, there is only one from the United States submitted by “Hella Basque” blogger, Anne-Marie Chiramberro. Videos that receive the most likes on AEK’s YouTube channel win.  If you would like to support Anne-Marie in her efforts click here to see her video, and make sure to click the like button below.  All of the submissions are also available here. Sorte on deneri!

On behalf of everyone at NABO we would like to extend our sincerest condolences to NABO President, Philippe Acheritogaray, and his entire family, on the passing of his uncle Alphonse Acheritogaray. You can read his full obituary here. Goian Bego.