When the sun goes down on June 23rd, many a bonfire is set ablaze to mark San Juan Eguna, the feast of St. John the Baptist, which marks the Basque Summer Solstice. In some towns the celebration is supplemented with more festivities and dances. 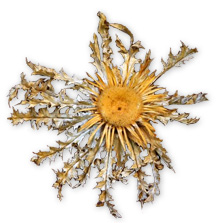 Basques became Christianized around the 8th century by most estimates. Before that they held their own indigenous beliefs although there is only scattered physical evidence of their pre-Christian faith. It seems certain, however, that their working assumption was that people could connect with the supernatural world to influence the natural world--and vice-a-versa. Thus they developed rituals (making the invisible, visible) to make this connection. In an earlier time, the Summer Solstice (the longest day of the year) must have seemed magical and it spawned a wide assortment of rituals throughout Europe. In the case of the Basques, we are not certain what those pre-Christian rituals were, but what has survived is their rough form with a new Christian context. Thus what we now know as San Juan Eguna ("the day of St. John the Baptist") seem likely to have been adaptations of earlier rituals marking a day when it seemed as if the sun stood still in the sky.

In Western Christianity The Nativity of St John the Baptist, though not a widespread public holiday, is still kept in the Roman Catholic, Anglican and Lutheran Churches. The night of June 23 is celebrated as the shortest of the year in the northern hemisphere and it is taken to symbolize the triumph of light over darkness. This day was fused with the commemoration of St. John the Baptist. Usually the day of a Saint's death is celebrated as his or her feast day, but in this case, the birth of St. John the Baptist is marked (image at left). The main features of rituals revolving around this day are the fire and water (St. John the Baptist link) and certain plants.. Thus on this night in the Basque Country massive bonfires set ablaze. Legend has it that the ashes cure skin diseases and that one should jump the fire a minimum of three times to have a good year.

THE LONGEST DAY OF THE YEAR. There are two solstices each year, when the tilt of the earth's axis is most inclined toward or away from the sun making for the longest (Summer) and shortest (Winter) interval of sunlight. The name is derived from the Latin sol (sun) and sistere (to stand still), because at the solstices, the sun appears to stand still and come to a stop before reversing direction. Our current (Gregorian) calendar marks the Summer Solstice right around June 21st, whereas the older Julian calendar marked the day on June 24th thus the discrepancy. 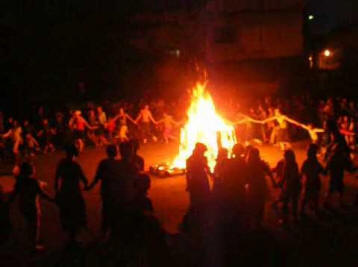 In the Basque Country, the arrival of San Juan Eguna is marked by parties, Patron festivals, neighborhood rituals and of course the omnipresent bonfires. There are many places in the Basque Country that celebrate this holiday in big and small ways: it can be as simple as a group of neighbors joining together to build a bonfire, or a whole town gets involved in the festival such as in Arrasate-Mondragón and Donostia-San Sebastián. 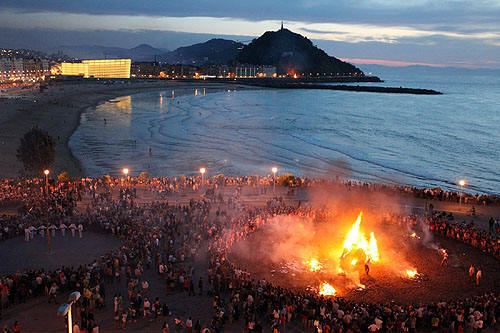 A particular varied celebration is in Tolosa (Gipuzkoa) which offers a wide range of events with bullfights, processions, dances, the marching of militia and the performance of the traditional "Bordon-dantza." 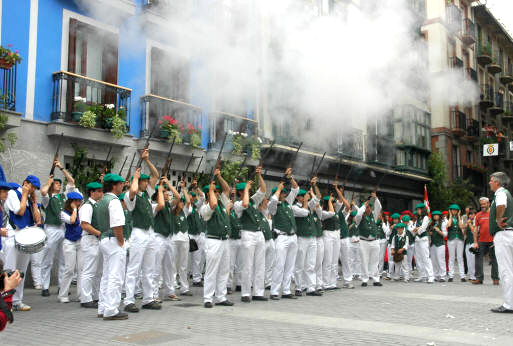 On the feast of St. John in Tolosa (Gipuzkoa) the day is marked with among other things processions through the streets of the town with "militia review" (above) and the traditional "Bordon-dantza" (below) 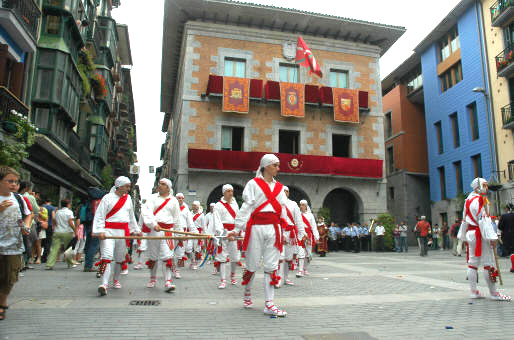 An ash tree is cut down and placed in the town square and each house is also decorated with branches. In addition, herbs are gathered on the morning of San Juan and kept throughout the year. 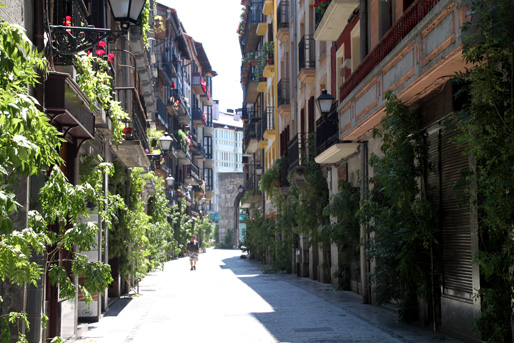 Meanwhile in Laguardia (Álava), a character named "Cachimorro" leads the parade in front of the dancers. When the cortege arrives at the church of San Juan, the flag of Laguardia (as a symbol for the community) is waved before the image of the Virgin Mary of Pilar (there are many variations on Mary in the Basque Country, e.g., Our Lady of Begona, Itziar, Arantzazu, etc.) This act of respect and homage is carried out by the Town Attorney, who first extends the flag on the floor of the church at the feet of the Virgin. He then takes it in his hand, and to the rhythm of a typical march composed centuries ago especially for this ceremony, he waves it, folds and unfolds it in skilled twists and turns, and ends by presenting it totally unfolded on the floor, kneeling, and praying a Salve Regina or a Credo. He then repeats this ceremony at the main altar, before the image of Saint John the Baptist. 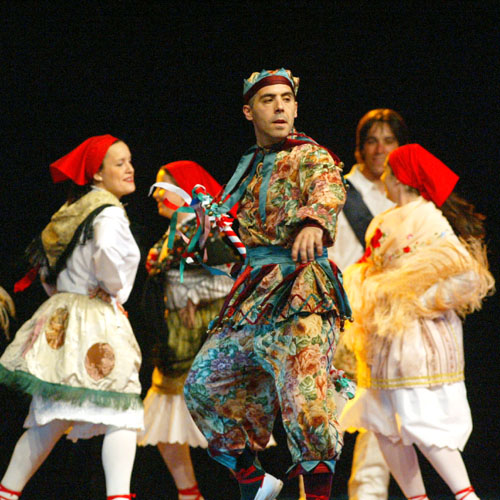 The "Cachimorro" of Lagaurdia (Araba) from the procession on the feast of St. John. 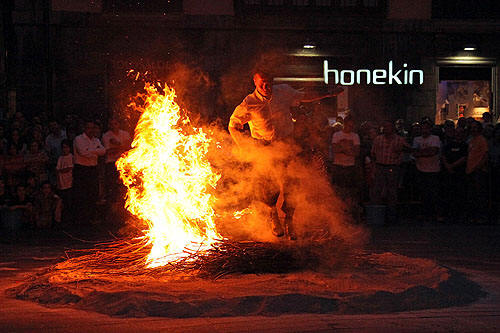 Legend has it that the ashes cure skin diseases and that one should jump the fire a minimum of three times to have a good year. (Photo diariovasco.com)

There are many variations on the theme of the Summer Solstice in the Basque Country, and throughout Europe for that matter, though now the meanings have been transformed. Not to many today make this a day to pick mid-summer plants for their perceived miraculous healing powers, nor lighting bonfires to fend off evil spirits that roam freely when the sun reverses direction in the sky southwards again (bringing days of shorter sunlight that culminate with the Winter Solstice that coincides with Christmas--which is not a coincidence). For some it still marks a special day in their religious calendar. For others, it's a great excuse to jump over flames! All told, the rituals of San Juan Eguna still serve as a way of bringing the community together. 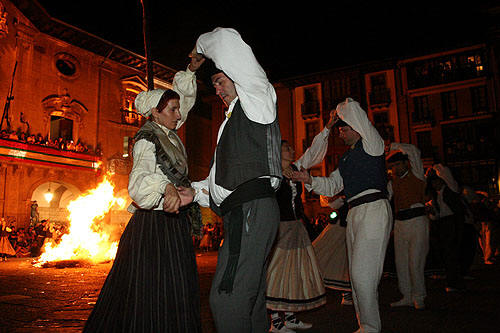 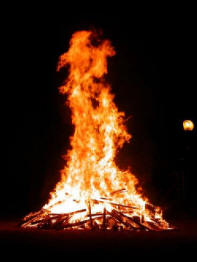