The Mendiko Euskaldun Cluba invites everyone to visit the Carson Valley Museum and view its Christmas tree. This year's tree features miniatures of the Overland and JT Basque Bar, two beloved spots for many in the area. When you visit you'll be given the opportunity to vote and donate money towards your favorite tree, with the tree getting the most donations winning. All proceeds will benefit the museum. In this season of giving here's another unique way to contribute to the community and back the Gardnerville Basque club at the same time!

Save the Winnemucca Hotel 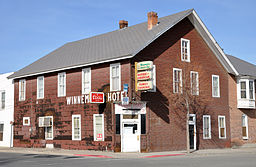 We were also made aware of the campaign to save the Winnemucca Hotel in Winnemucca, Nevada. This restaurant and hotel belonged to Mike Olano for many years, and then to his son after his death. Mike Sr. was a recipient of NABO's Bizi Emankorra award in 2005, in recognition of his service as Winnemucca Basque club's NABO representative for more than 20 years. He purchased the hotel with partner, Claudio Aguirre in 1963. The Winnemucca Hotel is touted as the oldest in Nevada, having opened in 1863. If you would like to learn more or contribute to the cause visit this website.

Boise's Euzkaldunak, Inc. will hold its annual Sheepherder's Ball on December 20th at the Basque Center at 8pm. Highlights of the evening include the debut performance for new members of the Oinkari Basque Dancers, a lamb auction followed by dancing to Amuma Says No. Cost of the event is $5 and it is open to the public. Proceeds from the Ball are always donated to someone in the area in need of financial assistance. This year's recipient is Jared Ellis, a 17-year-old high school student who suffers from a rare form of cancer. For more information on the event, or if you can't attend and still want to donate, click here.