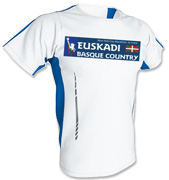 Our friends at the New York Basque club are hosting a dinner on Saturday, November 1st at 7pm to celebrate this year's New York City marathon along with a group of runners from the Basque Country. For more information email Itziar Albisu. As every year, they will again set up a stand on the corner of Greenpoint Avenue and Eckford Streets to cheer the participants as they run near the vicinity of the Eusko Etxea. This year, folks will also have the opportunity to represent Euskadi during the marathon by sporting an official Euskadi t-shirt designed by the Basque Athletics Federation. Deadline to register for one of these shirts is October 26th. More information is available here.

Basque Studies at Boise State is also happy to announce that the latest issue of BOGA, its online journal, is now available. You can read it by visiting this link. They also want everyone to know that they are currently accepting submissions for their next issue that will come out on August 1, 2015. Information on how to make an online submission can be found here as well.

For those of you who may have been following the case against the newspaper "Egunkaria," we were also alerted today that the civil case regarding its finances was thrown out after eleven years, since the statute of limitations was up. As in the criminal case against the paper, no one was found guilty of any wrong doing. "Egunkaria" was closed in 2003, due to alleged ties to ETA. The criminal case against the paper concluded in 2010, with the five suspects being found not guilty, and concluding that the paper was in fact not linked to ETA. More information in English can be found here.