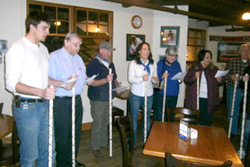 Basque language students in Boise are extending an invitation to anyone who would like to participate and join them on February 3rd at 7pm at the Basque Museum to celebrate Santa Ageda. They will provide the song lyrics as well as sticks, and no prior experience or knowledge of the songs is required. Bring your family and friends and wear white and blue if possible, as these are the traditional colors worn for this celebration. If you can't attend on the 3rd, there is another opportunity on Thursday February 6th at 10:30am to celebrate Santa Ageda with the Boise'ko Ikastola (1915 University Drive, Boise ID). View their flier. Hi ere Kantari!

The San Francisco Basque Cultural Center will be celebrating its 32nd anniversary on February 15th and 16th. Highlights of this year's celebration include a tribute to 50 years of Klika in San Francisco, pilota and joko garbi matches, Bizi Emankorra award presentations, mass and lots of good food, fun and friends. For complete weekend information including information on hotels and how to RSVP, please see their flier here. Zorionak dener!

We would also like to share the NABO Club Mus Tournament schedule with you. We know that there are many Mus players in our clubs that love to travel to as many tournaments as possible to better their chances of getting into the national finals, to be held in Marin Sonoma on May 31st of this year, and eventually to the international tournament in Cancun Mexico. Here is a list of tournaments to date. If your club's dates aren't here, or are incorrect, please let us know ASAP so that we can share the right information. Hor dago!