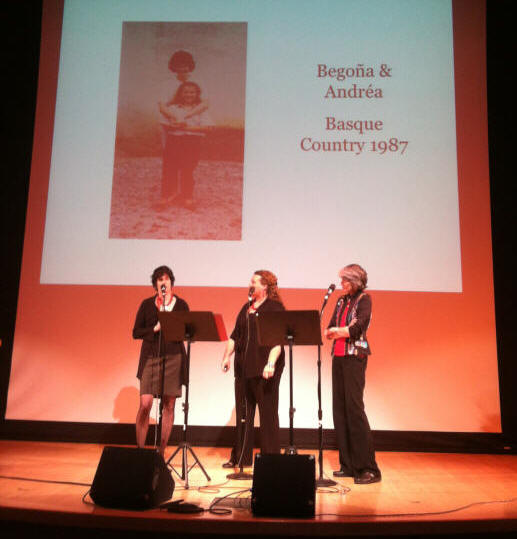 The Basque singing group "Noka" consists of three women of Basque descent from Chino, CA.  Thus this tour is an effort on the part of NABO to also promote "our own" on a periodic basis.  The group's name derives from the Basque noka form of address among women; it means to speak familiarly or informally to women.  NOKA is:  Catherine Petrissans, Andrea Bidart Oteiza & Begoña Echeverria.  They will also  be joined by their Basque Country guitarist Laurent Ascarain. Visit NOKA's website. 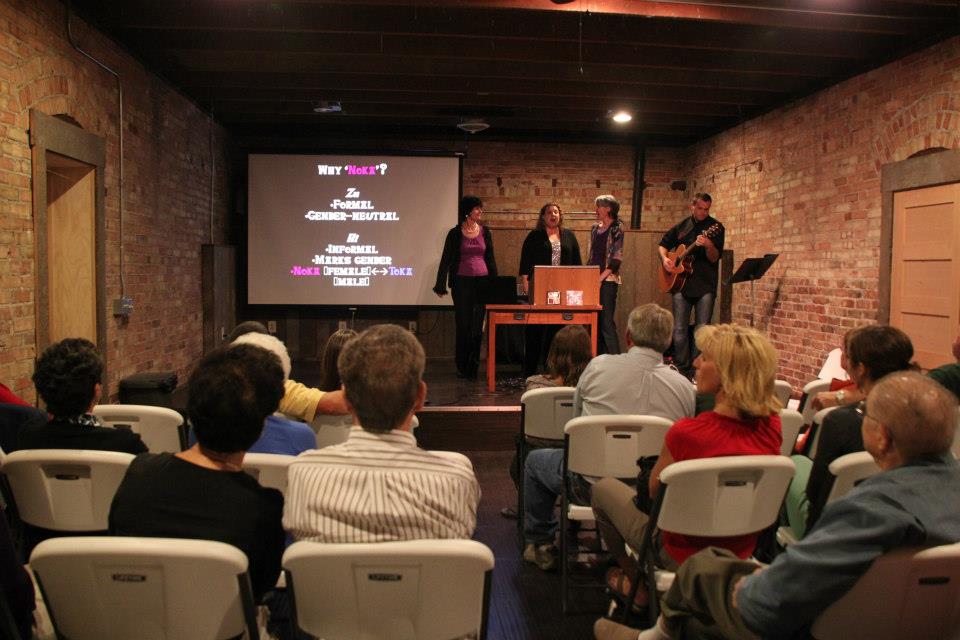 Their show consists of contemporary and traditional Basque songs, including songs of their own composition.  Their concert is supplemented with English translations on PowerPoint slides making the program more accessible and educational.  They have performed at various Basque and non-Basque venues, and also in the Basque Country on a recent tour.

NOKA: Preserving Euskara Through Song in the United States

Original 2006 story at www.euskosare.org posted here in case it is re/moved

Noka is a familiar form of address in Euskara used only in speaking to women. It literally means to speak familiarly or informally to women, and was used throughout the Basque Country when addressing women or girls with whom one felt “konfiantza” or trust. Use of noka began to decline in the 19th century, though speakers from some small villages (many of whom immigrated to Chino) continue to use it. NOKA hopes to revive interest in songs about women - especially those using noka forms - through its music.

EuskoSare had the opportunity to speak with the singers of NOKA (Mar. 2006)

Q: Tell me a little bit about yourselves.

Andréa: My father is from Chino and my mother from Patterson. My maternal grandmothers were both born in America and my paternal grandfathers were born in the Basque Country (Ibarla and Azkarate). I understand Basque completely and am able to speak it with my husband Mikel who is from the Basque Country. I'm a School Psychologist/Director of Special Education for Valle Lindo School District in South El Monte. Hobbies include singing with NOKA and with my father.

Begoña: My parents come from Orabidea in Baztan. My father’s house is in Amaiur, and my mother’s house is in Lekarotz. My first language was Basque. Yes, it seems that many children that come from Baztan are raised speaking Basque here. I grew up with many relatives who spoke Basque (one of my father’s brothers’s married my mother’s sister), so it was the most natural way for us all to speak. I was very lucky to have many people to speak Basque with. I'm currently an assistant professor (sociologist of language) at the Graduate School of Education, UC Riverside.

Cathy: My mother is from Osses-Ortzaize and father from St. Esteban. I have two daughters, Maialen (4 ½) and Nekane (2 ½). I am currently on childrearing leave but will soon return to my job as an Associate Professor of Sociology at Clarion University of Pennsylvania. NOKA is currently my primary hobby, but I also enjoy ballroom dancing with my husband Jeff.

Q: How did you get interested in the noka form of speaking? How did the interest first spark?

Begoña: We’ve been singing informally together for about 16 years. We were all part of “Euskal Giroa” an all women ensemble in Chino who sang songs in Basques. The noka idea came as I was doing my dissertation research in Donostia in 1997. When I learned about noka, I thought it was very cool. We had been looking for a name for our group, one thought was “American Basque Chicks” (ABC) but then we thought it would be great to have one word and we came up with “NOKA.” Our name has really focused our singing, and now we look for songs that are just in noka or we translate them into noka, or we even write our own songs. We started singing as NOKA ten years ago in 1996.

Cathy: We always sang at funerals and weddings so it branched out of that. And now we are seen more as “NOKA” and are asked to sing at weddings and funerals as a group.

Andréa: Because we have been singing together for a long time, we find if very easy and natural to sing together. Cathy sings high and Begoña and I switch off with melody. We started recording songs for fun and then my father suggested we make a CD. We went to Martie Echito’s studio, a Basque musician in Ontario, Ca. He played a lot of music on the CD and helped with the arrangements.

Q: How did you begin to include translations of your songs in your performance?

Begoña: We had the opportunity to perform at the Claremont Forum in June of 2005. It was for an American audience and that’s how we started with presenting English translations of our songs.

Andréa: Even the people that do know Basque can have a hard time understanding.

Begoña: Especially with all the different dialects, like the Bizkaian dialect which I have a hard time reading and understanding the first time. We thought it would be nice to have the words up as we sing and be able to teach at the same time.

Cathy: We want to teach what noka does, show a bit of its history and grammar. One must see it to really understand it. We highlight the noka form on the slides and after awhile it’s easy to recognize.

Q: Have you ever performed in the Basque Country?

Andréa: We have sung on the Xorroxin Irratia radio program in the past while we were vacationing in Baztan. It is possible that we may perform in December or during the summer of 2007. We enjoy singing in small, informal settings.

Q: Do you write your own songs?

Begoña: We’ve taken traditional Basque tunes and changed the lyrics. Except for “Zertako Ez” which is a Pennsylvania Folk song that Cathy sings.

Cathy: I am very interested in taking American folk tunes and putting Basque lyrics to them. People are saying that we have an American sound. Also, Basque people here are not aware of American folk music. Folk festivals here love that cultural blend.

Begoña: It’s very common in Basque culture to take a Basque “airea” (tune) and put different words to it. It’s part of the Basque culture. People then would ask us why we don’t write our own songs. So that is when we started to actually write our own lyrics.

Q: Any plans for another CD?

Begoña: We would like to eventually, but timing is difficult as we all have day jobs and Cathy is moving back to Pennsylvania. We thought about creating one with church songs, or children songs, or even another noka one like the last CD.

Cathy: We are not professional musicians, so it takes us a lot of time. We've taken friends and family to play music. We always want to sound natural. For example, my dad played the klika bugle in “Neska Soldadua.”