It was a good time in Elko getting our Basque up!  This year's NABO Convention was hosted by the Elko "Euzkaldunak" Basque club, and there was plenty of Basque fun across those three days including Running from the Bulls!  Below are some of those moments.

Many thanks to the members of the Elko "Euzkaldunak" Basque Club for putting on a great festival!  Their work allowed us to play. 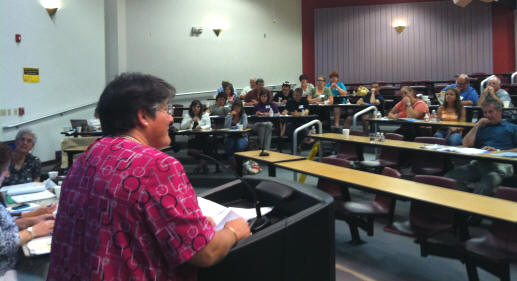 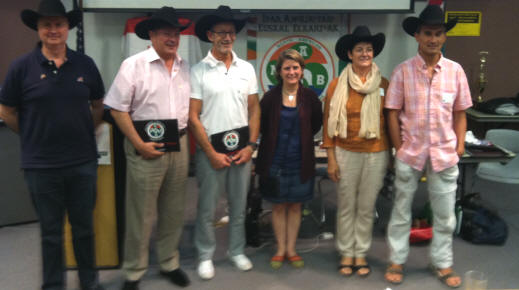 The weekend also brought us a delegation from the Basque Government, headed by Lourdes Auzmendi (orange shirt) Minister of Culture and Julian Celaya (pink shirt).  The delegation was gifted cowboy hats (don't read too much into the black hats!). 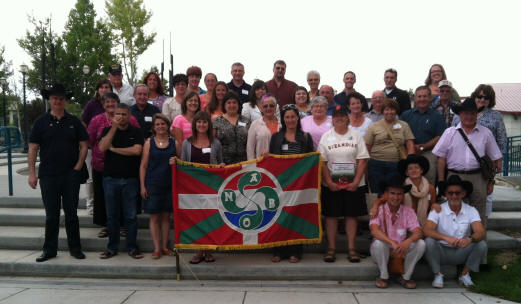 The NABO delegates were compelled to pose for this photograph or else they were threatened with no lunch!  This next year NABO will be celebrating its 40th anniversary of bringing Basques together in shared ventures. 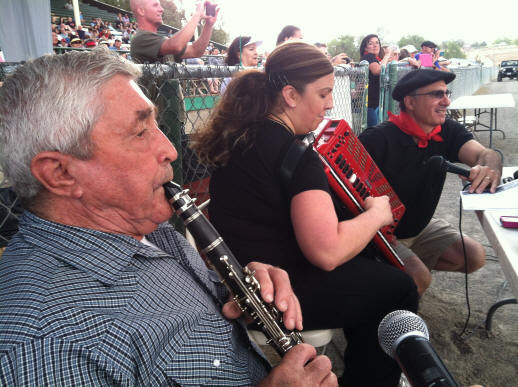 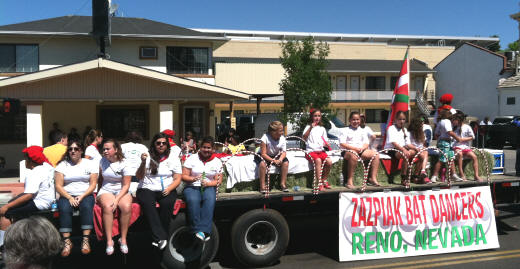 The NABO Convention is a chance to assemble most of our dance groups on an annual basis; here the Reno "Zazpiak-Bat" cruise by during the Saturday morning parade that winds through the city's main street. 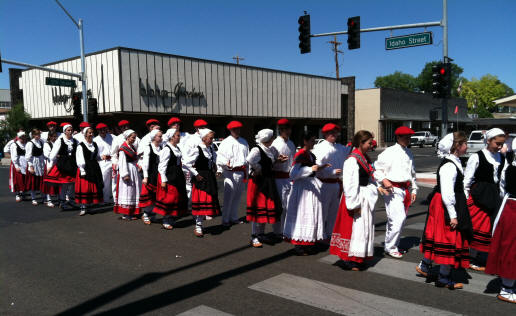 The group "Hartza" during the Saturay morning parade consists of various California city dancers that periodically join together for these NABO Conventions; the name derives the California flag with its prominent bear. 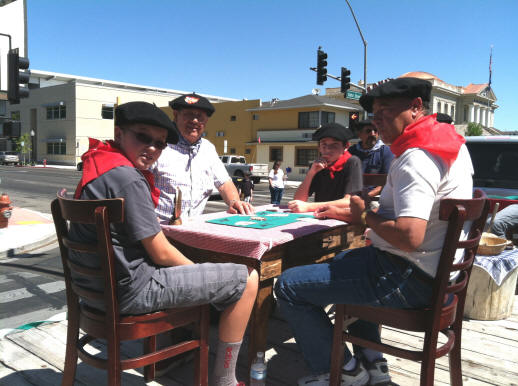 Here the winners of the NABO Junior Mus Tournament, Riley Anema (L) and Kaiet Ysursa (back right) of Chino, CA take on the grown-up challengers as they cruise along the parade route.  The boys insist they defeated the men. 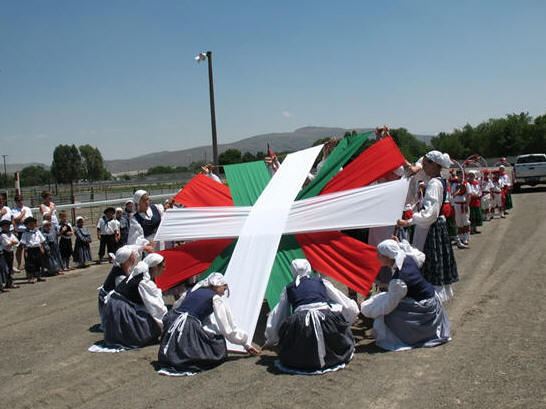 The opening ceremonies on Saturay began with the U.S. national anthem, and the defacto Basque national anthem of "Gernikako Arbola" as the Elko Arinak dancers created the Basque flag. 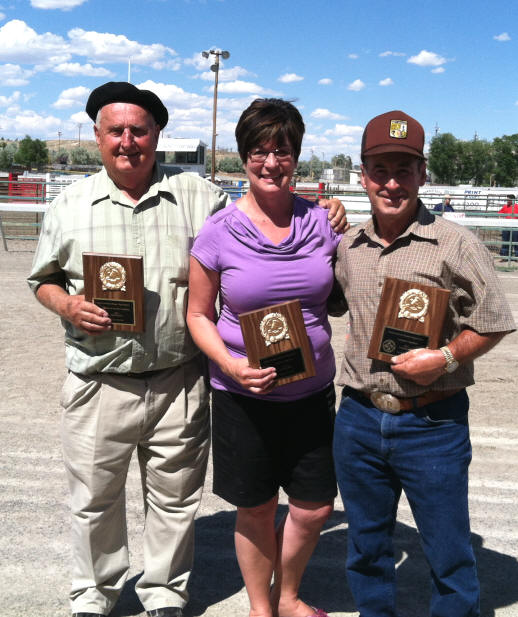 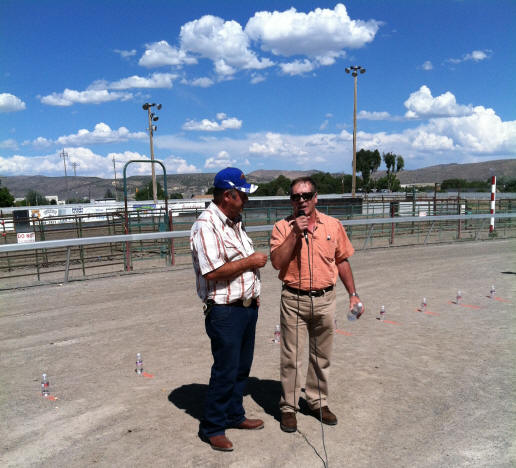 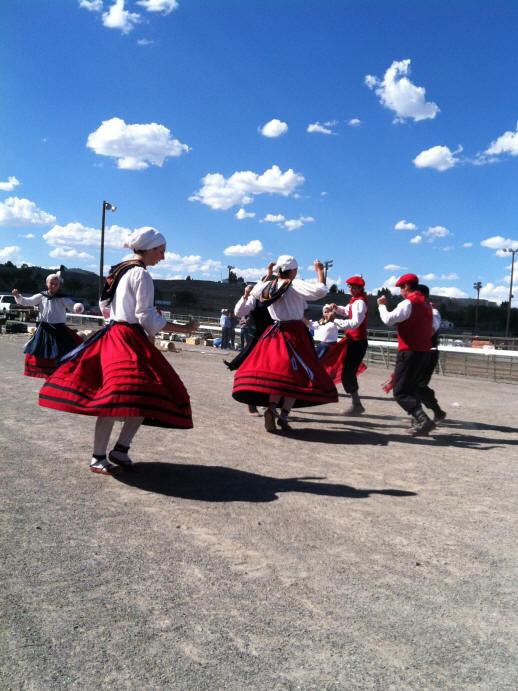 The Winnemucca "Irrintzi" dancers performing during the Saturday program.  The Winnemucca dancers are regular performers at the Elko festival. 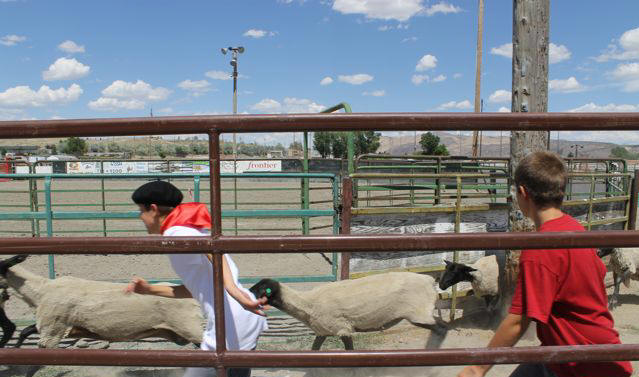 For the youngsters things became animated with the running with the sheep feature.   www.euskalkazeta.com 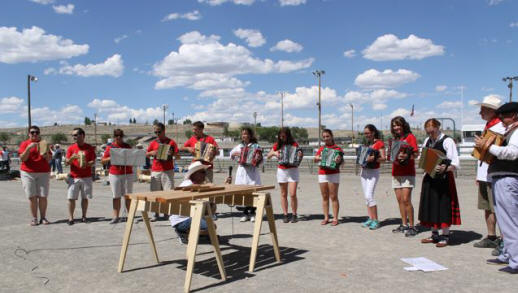 Boise's Txantxangorriak ("Red Robins") performed both days, featuring diatonic accordion and tambourine music.  Founded in 2000, this groups continues to promote the learning of Basque instruments including the Txalaparta (center). 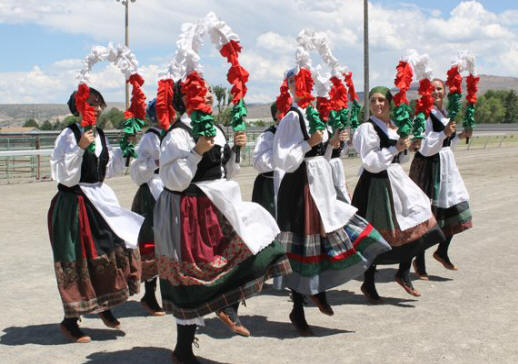 The Utahko Triskalariak performed on both days.  This group is now into its second generation of dancers, and they are regulars at the Elko festival that add a fine dimension.  (Photo www.euskalkazeta.com) 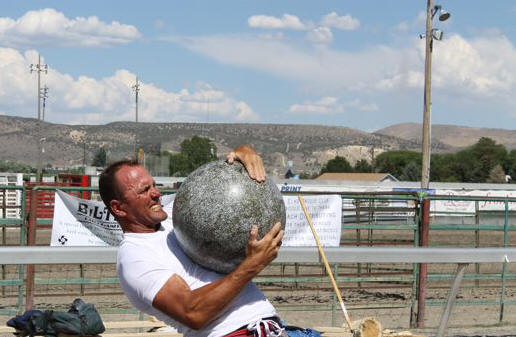 The Elko festival has always made it a point to feature Basque woodchopping and weightlifting Basque style.  Photo www.euskalkazeta.com 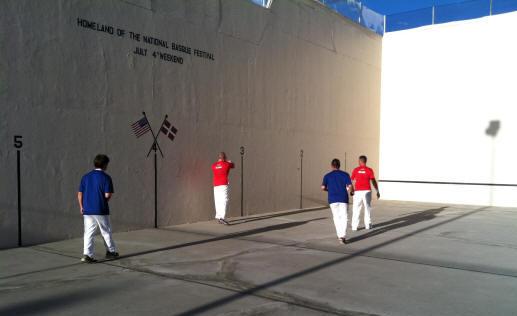 This year's NABO Pilota champions were Boise's Edu Sarria and Jeremy Malone (in red).  The game requires players to strike a ball about the size and consistency of a baseball so handshakes after a game are always tender. 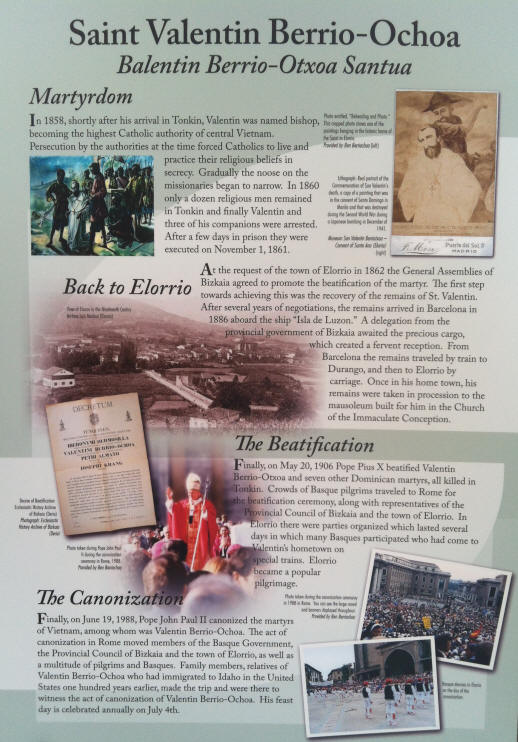 In conjunction with the Basque mass was the dedication of a new Basque patron saint for Basques of Elko, NV and Mountain Home, ID: Balentin Berriotxoa 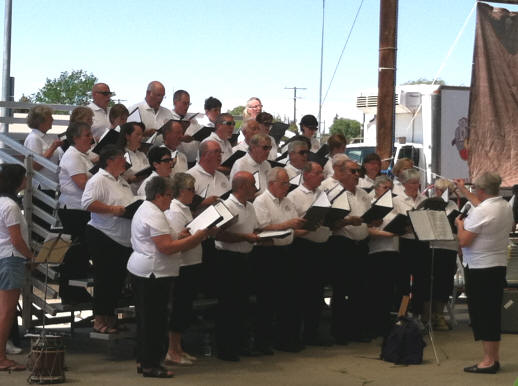 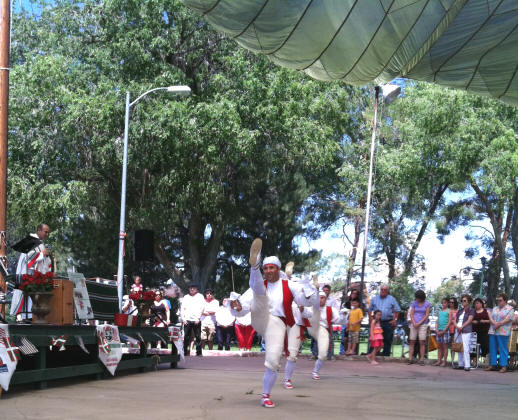 Three members of the Boise Oinkari dancers perform the "Ezpata dantza" during the consecration of the Basque Mass. 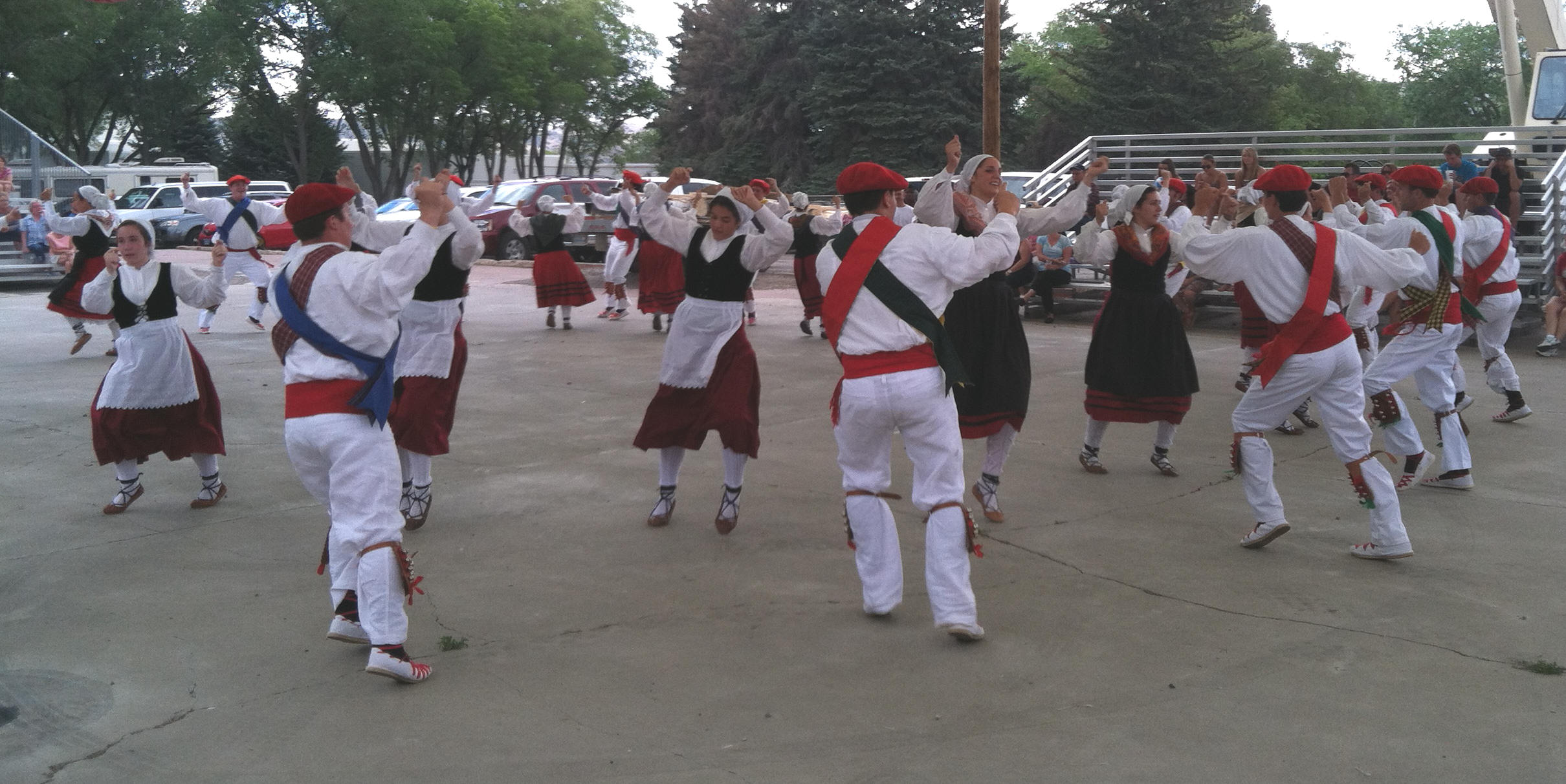 The NABO Convention is about bringing Basques from all corners together; here the young dancers from Bakersfield, Boise and Chino perform together Sunday afternoon. 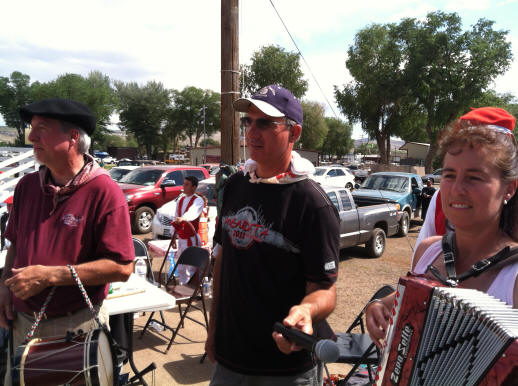 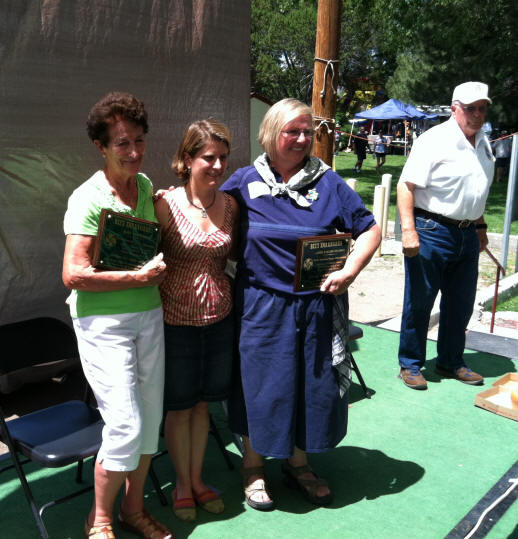 This year's recipients of NABO's Bizi Emankorra ("Lifetime Contribution") award were Mary Gaztambide (Salt Lake City-left) and Anita Anacabe Franzoia (Elko) with NABO President Valerie Arrachea (San Francisco-center).  On a personal note:  many thanks to Elko's Anita and Bob Echeverria (right) for their assistance in organizing the NABO Convention. 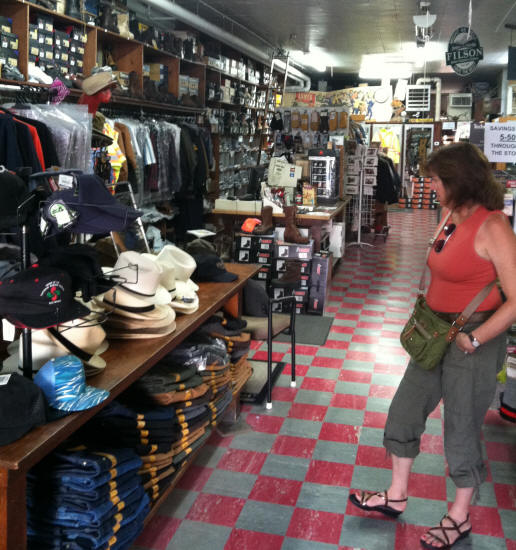 On the way out of Elko, one last stop had to be the Anacabe store on Idaho Street (founded in in 1936) that supplied many a Basque sheepherder and today outfits the worker and outdoorsman.