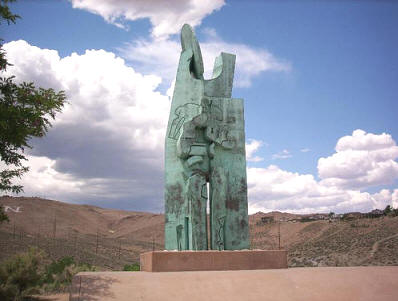 Part I: The Bad News: Theft of Donor Plaques

Sometime last spring of 2011, the National Monument to the Basque Sheepherder that stands in Rancho San Rafael Regional Park in Reno, Nevada was vandalized.  Most of the bronze plaques and some of the large bronze letters above them were stolen from the wall of the monument. A couple of months later, the large bronze map of Basque settlements in the United States, as well as the large letters marking the cardinal points, also disappeared.

In part, the fact that the Monument is in an unprotected area on the outskirts of Reno may make it more vulnerable. But other bronze plaques were also stolen from the urban setting of the Police Memorial in Reno. The only plaque not stolen is the one at the foot of the sculpture displaying artist Nestor Basterretxea’s poem, “Solitude.” (Ironically, this is the one plaque that we have wanted to replace for many years, since the translation of the poem into Basque is not particularly good!)

Andy Mink, the district manager for the park districts that include Rancho San Rafael Park, has been working with the insurance company and a sign company to determine loss and the cost of replacement. The theft is covered by insurance and the items will be replaced, perhaps in a different material, at an estimated cost of $25,000.

The bronze plaques stolen from the National Monument to the Basque Sheepherder have recently been replaced with more durable steel ones. The original plaques, stolen in January of this year, were taken from a wall near the monument in Rancho San Rafael Park and believed to have been resold for the value of their bronze.

The replacement plaques are now anchored more solidly so they last longer and are constructed of steel to be less valuable to potential thieves. They were created by New Jersey-based NW Sign Industries, with help from Washoe County park authorities and input from Carmelo Urza, one of the organizers of the original monument and the author of Solitude, a book about the monument.

“We are really grateful to District Manager Andy Mink and the Washoe County Open Space and Regional Parks Commission for their work in having the plaques reconstructed and replaced,” said Urza. “The plaques are beautiful, and the site once again provides a permanent tribute to the story of Basque emigration to the United States.”

Urza also recommended that anyone traveling to Reno for the Reno Basque Picnic on July 21 take advantage of the opportunity to visit the monument. The turnoff to the monument is located north of McCarran Blvd. on North Virginia St. in Reno.

District Manager Mink worked with Urza and the sign company over a period of many months to correct name misspellings and blank spaces before the new plaques went up.

“It was a long time coming,” he said, “but it was a good opportunity to get names corrected. Hopefully it’ll stay up for a long time now.”

The monument, created by renowned Basque artist Nestor Basterretxea, originally inspired controversy with its stylized abstract depiction of a Basque sheepherder carrying a lamb beneath the moon. The monument was built to represent not only the sheepherder but his descendants in the American West and, indeed, all Basques.

The recent attention to the monument has prompted other descendants of Basque immigrants to ask about adding the names of their loved ones to the plaques. NW Sign Industries is helping with the creation of an additional plaque for those who wish to add their names or to honor those of their loved ones.

For more information about adding a name to the new plaque, please contact leanne@usac.unr.edu. 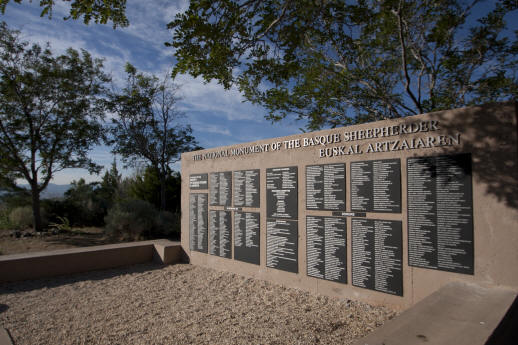 The Basque monument was inaugurated in 1989.

Johnny Curutchet Bertso at teh Monument (2012)