Stopping short of conceding defeat, a trio of E.T.A. representatives nevertheless took a momentous step (Oct. 2011) beyond earlier declarations of calling for talks or a peace process of some sort, by announcing a definitive end to violence.

Editor's note:  where to begin with all of this?  When one wades into a discussion of ETA it quickly becomes complicated to say the least. Even objective statements of fact become controversial; e.g., why did you mention this fact and leave out that one from the other side? For the record the following is NOT an official statement by NABO.  It is however an acknowledgment of the momentous announcement last week that ETA's use of violence--after four decades--will once and for all be over.  Will ETA has we have known it come to an end?

Generally the two ways you get people to do what you want them to do are variations on the theme of force and finesse.  Force or the use of power is used to compel people, while also finesse or attempts at persuasion have also proven successful to get what you want.  This truism was reflected in one of the logos of the Basque militant group E.T.A.  The initials E.T.A. (Euskadi 'ta Askatasuna) in Basque stand for Independence for the Basque Country, while "bietan jarrai" means continuing with both.  The snake served as a symbol for finesse but the axe reminded all that this group was ready to used violence as well.  Since the late 1960s in a campaign of bombings and shootings E.T.A. killed more than 800 people in its drive to create an independent Basque Country.

This historic announcement means, among other things, that E.T.A.s logo will be transformed:  their means to achieve their end--to get what they want--will no longer be about Bietan Jarrai--using both force and finesse. 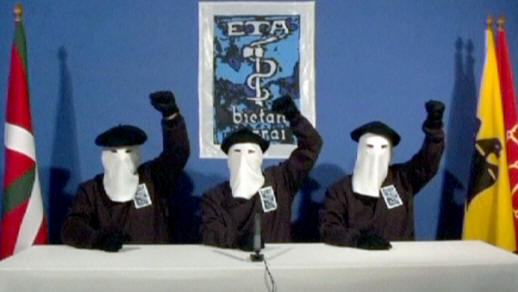 Three E.T.A. representatives in customary garb and backdrop for public announcements, issued an historic video announcement (Oct. 20, 2011) ending its armed struggle.  Stopping short of conceding defeat, the trio stated that ETA has  "decided on the definitive end of its armed struggle." But significantly, the group did not suggest that it would dissolve in an unconditional surrender — as Spain has demanded for decades.  So while the axe might be dropped from the logo along with "bietan" (both), the trio nonetheless defiantly raising their fists in the air to conclude the video announcement demanding a separate Basque nation means that ETA (Independence for the Basque Country), the snake (non-violent means) and "jarrai" (continue) will remain.   So while ETA has not disbanded, nor conceded defeat, if its pledge to stop with violence holds, this marks a new era for Basques.  Thus this promise of an end of violence sparked measured celebrations throughout the Basque region and Spain.

Basques of the Diaspora are also impacted by this statement, for example, in how their non-Basque neighbors hear about Basques.  News by definition is almost always bad news.  Given that fact along with the small Basque region and the relative small number of Basques in the western world, most other people if they ever heard of the Basques most recently, it was the Basques as terrorists.  Yes depending on perspective, one person's terrorist is another person's freedom fighter, but a post 9/11 world did not bode well for ETA's embrace of the axe metaphor for violence.  Classified as a terrorist group by Spain, the European Union and the United States, the group's power and ability to stage attacks waned over the last decade, following the Sept. 11 attacks and the 2004 Madrid train bombings by radical Islamists.

The announcement follows a carefully choreographed process that began a year ago when ETA's political (snake or finesse) supporters renounced violence.  Then international figures such as former U.N. Secretary General Kofi Annan attended a conference that called on ETA to lay down its weapons.  The ETA statement acknowledged this new era:  "We have an historical opportunity to find a just and democratic solution for the centuries old political conflict.  Dialogue and agreement should outline the new cycle, over violence and repression."

There will be more to this story.  ETA has raised hopes before with announcements of cease-fires, even ones it called permanent, like a truce in 2006 that ETA ended after nine months with a huge car bombing that killed two people. But it might be different this time, because ETA has been decimated by arrests in recent years and declining grass roots support among Basque nationalists.  ETA had not killed anyone in Spain in two years and was reportedly down to as few as 50 fighters.

Time will tell because the political conflict is not over:  antagonism remains.  ETA did not apologize for its use of violence and the killings; there also remains the estimated 700 ETA prisoners scattered around Spanish and French jails, many that are kept a great distance from the Basque region.

Nevertheless it is big news that ETA might well be setting aside its "axe" for good.  Four decades of armed conflict has taken a toll on how Basques are viewed, and how Basques view themselves.  The issue of an independent Basque country will remain open to debate, but that it will be argued with ballots versus bullets is a significant difference.  Basques of the Diaspora will continue to watch closely how this story develops, and most will be hoping that this latest call for an end to violence will stick.

This might be the beginning of the end of ETA as we have primarily known it across four decades:  the axe and the implication of violence always loomed largest.