Many Basques came here as sheepherders, and most had the same idea:  they would work for several years then return to the Basque Country.  That some changed their minds is evident or else you are likely not reading this now. Others however return and this is their story.

See the original online story and the latest news of the Basque Diaspora at: www.Euskalkultura.com 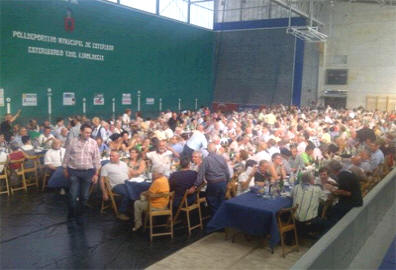 Recently a new organization has been formed to periodically gather those men who herded sheep in the United States from 1940 to 1970.  It is called Euskal Artzainak Ameriketan or the Basque Shepherds in America.

The launch of the new organization was announced at the Sept. 2011 gathering that was marked by emotional moments, like the Mass when the celebrating priest commented on the harshness of those months alone.  Then when a choir sang “Agur Jaunak” fifteen people had to leave the church when overcome with emotion.  The event included a photographic exhibition with images retrieved by the association, and it concluded with a dinner at the sports center of Zubiri, Nafarroa.

The new association is at work developing initiatives beyond an annual gathering, to include a return trip to the American West in conjunction with some of the festivals.  Currently, the board is comprised of twelve people, and after Saturday's lunch they already have almost 1,000 members. Anyone who would like to join Euskal Artzainak Ameriketan or contact the board of directors can do so by emailing: euskalartzainakameriketan@gmail.com