The slopes of the Big Horn Mountains (and they are big with peaks that rise above 13,000 feet/4,000meters!) in Buffalo, Wyoming served as the locale for this year's NABO Convention hosted by the Big Horn Basque Club.  And what a high-flying weekend it was!  One of the most distinguishing elements was the level of community involvement.  The town population is around 4,500, but on Saturday of the festival they ran out of wrist entry bracelets after selling 5,000 and they had to start marking hands.  Folks--Basques and non-Basques--came from all around. 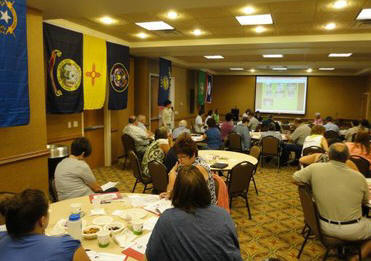 The Convention meeting was held at the local Hampton Inn & Suites that made it clear outside where Basques could gather.  Delegates re-elected Valerie Arrechea as President, and Grace Mainvil as Treasurer.  (Photos Euskalkultura.com)

There were so many good things going on with great music, food & company, but a special note of recognition has to go to the Big Horn club for putting together one of the best picnic booklets ever.  It was both informative and flashy in an all-color format.  Check out some excerpts at Buffalo 2011 program excerpts. 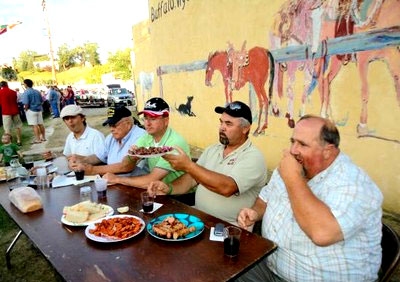 It was a "dirty job" but fortunately these Basque men were up to the task of judging.

During the festival people were recognized for their extraordinary contributions to Basque culture above and beyond their own community, with NABO's Bizi Emankorra award.  This year's recipients include Isidro Echeto (Winnemucca), Martin Goicoechea (Rock Springs), Kate Camino (Buffalo/Reno) & Victor Esain (Fresno).

One impressive moment during the Saturday morning parade through Buffalo was the local high school band dressed up and playing Basque music.  Again, the whole community was throwing in for the festival.

An additional highlight, literally off the beaten path, is the Monday following the festival when members offer to take people up fishing into the Big Horn Mountains.  In the morning all go off in different directions, then for lunch everyone brings back their catch for a big outdoor meal.  It was a great time to relax and meet the locals now that they could take some time off themselves after a hectic weekend of work at the festival.  They are great hosts--here's hoping that they'll have us back again soon. 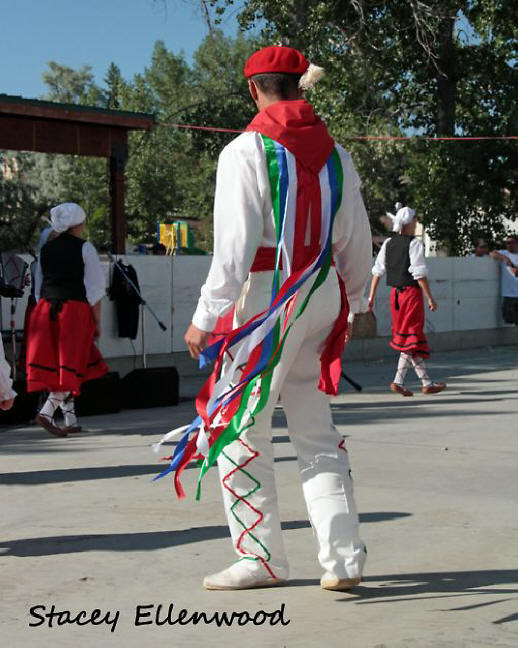 The weekend featured Buffalo's own "Zaharrer Segi" (Follow our Ancestors) Basque dance group performing.  The club was celebrating 30 years, but Basques have been in Buffalo long before that time.  Here's hoping that Basqueness will continue to thrive at the foot of the Big Horn Mountains!

Every year NABO celebrates  Kantari Eguna or "Day of the Basque Singer."  This year it was hosted by the Mendiko Euskaldun Cluba of Gardnerville, NV in conjunction with their 30th anniversary.  The event was held at the CVIC hall.  The day was filled with Basque song, thanks to many who came out of the audience. 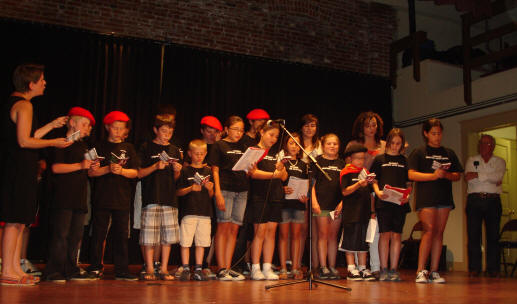 Kantari Eguna is an opportunity for people to come forward and share some of their favorite songs with the audience.  The afternoon concert also featured dance performances by the visiting Reno "Zazpiak-Bat" group as well as the local group of young dancers which has been reborn!  Some of the Gardnerville dance alumni also came back for this anniversary to do a special performance.  There was also an Udaleku 2011 reunion and they too sang a song together.

Gardnerville's Kantari Eguna brought in some outside talent, including Boise's "Amuma Says No" band for dancing and Bakersfield's Martin Etchemendy as M.C.