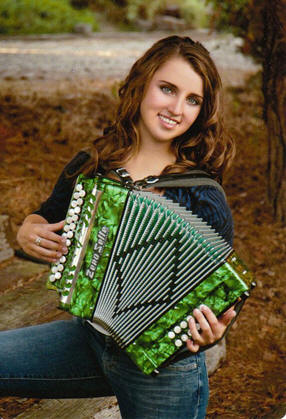 Recently Miren Aizpitarte, musician for the Oinkari Basque Dancers, was awarded the Idaho "Distinguished Student Award."  In an interview she stated that "it doesn't matter how much Basque you are, but how involved you are with it."  Exactly!  Eutsi ("sustain/keep it going") Miren!

Idaho Basque Miren Aizpitarte, a senior at Rocky Mountain High School in Meridian, Idaho, was recently awarded (Jan. 2011) Idaho's Distinguished Student Award where the local news highlighted her accomplishments.  In the course of a TV profile, her involvement in the Basque community came out as posted at www.ktvb.com.  It is this level of involvement that we celebrate.

Her credentials for this award were impeccable: while maintaining over a 4.0, she is involved in National Honors Society, the vice president of KEY club, on the varsity tennis team, and is in many advanced classes.  As she spends time being a student athletic trainer at her school, she also is an intern with the athletic trainer at Idaho Stampede basketball team.

Miren developed her interest in music when she started playing the piano at age six and two years later, she began learning the accordion in the Boise Basque group Txantxangorriak (accordion/tambourine ensemble).  When she hit middle school, she played alto saxophone in band as well as the jazz band.  She continued to play in the varsity marching band her freshman year of high school.  After Basque dancing in Boiseko Gazteak since she was in preschool, Miren continued Basque dancing with the Oinkari Basque Dancers of Boise, Idaho.  Also starting her freshman year, she volunteers for Boiseko Gazteak, teaching children Basque dancing and playing the accordion.

It was the beginning of her Sophomore year when she learned to play the unique, rare instrument called Alboka.  She is self-taught on the instrument and plays it for the Oinkaris and the local Basque band "Amuma Says No." Recently, Miren has had the opportunity of traveling to Ellis Island and Shanghai, China with the Oinkari Basque Dancers.  She was able to represent her culture by dancing and playing the alboka for the opening of the Basque immigration exhibit in Ellis Island, and for the World's fair in China.  On top of all her volunteer time in the Basque community, Miren is part of the Boise Greek Dancers even though she does not have Greek heritage.

Boise's Oinkari Basque Dancers are fortunate to have enough talented musicians so that the dancers can perform to live music, Gavica said. One of them is Miren Aizpitarte, 17, who taught herself to play the Alboka, a Basque instrument that dates back to ancient times and resembles a curved clarinet with a cow horn on the end.  The sound, similar to bagpipes, comes from circular breathing. Aizpitarte practiced for three months before the breathing clicked.  "As you get older, the concentration of Basque people spreads out and people forget," Aizpitarte said. "It doesn't matter how much Basque you are, but how involved you are with it."

We hope that she will stay involved, and that other Basque youth will take this as a positive example.  Zorionak--Congratulations! Eutsi Miren!