For the 100th anniversary of the birth of the Basque sculpture Jorge Oteiza, a tribute dance in front of one of his most famous designs--the church of Arantzazu in Gipuzkoa--was performed in August 2008.

Jorge Oteiza Enbil was born in 1908, and a century later his birth was marked with a special tribute highlighted by a dance choreographed by dance master Juan Antonio Urbeltz.  The day appropriately was appropriately staged in front of the Basilica of Arantzazu.  Sixty years ago when the current basilica church was built (this pilgrimage site dates back centuries) it was adorned with Oteiza's stone sculptures that he called "Apostoluak."

Urbeltz took that as inspiration to re-contextualize some traditional Basque dances.  Members from the Basque Country dance groups Argia, Duguna and Kezka performed the Soka-dantza of Gipuzkoa, and Oñati's Oñatz group performed their unique Korpus dantzak. 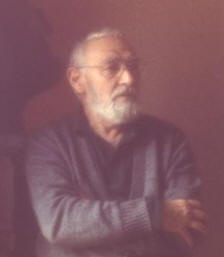 Jorge Oteiza Enbil
(October 21, 1908 – April 9, 2003), was a Basque sculptor, painter, designer and writer, who gained renown for being one of the leading lights in Spanish modern art.
Oteiza was born in Orio, Gipuzkoa but moved to South America in 1935, just before the Spanish Civil War (1936-39) and stayed there for 14 years.  In 1951 a new basilica was built at Arantzazu and Oteiza left his mark with his 14 apostles on the façade.
A believer in  "Basqueness" in 1963 he published Quosque tandem!, an essay about the aesthetics inherent to the Basque soul, based on Basque prehistoric art and the Basque people's anthropological roots.  He died in Donostia (San Sebastian), in 2003.  A museum commemorating his works is in Alzuza, Nafarroa where he lived since 1975. 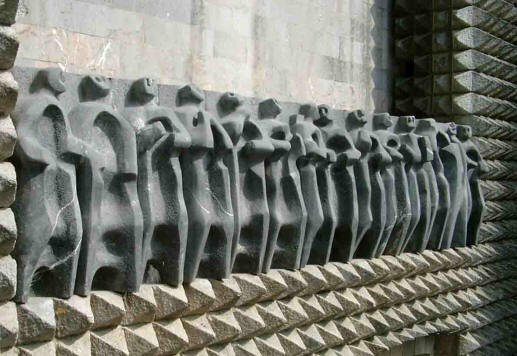 In this moment of the Apostoluen Dantza, the men assume the pose of Oteiza's  sculptured figures on the facade of the Arantzazu basilica. 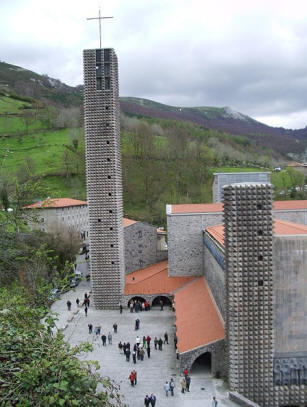 The Sanctuary of Arantzazu

(A’rant-sah-sue) is a centuries-old Franciscan sanctuary located in Oñati, Gipuzkoa.  A pre-eminent landmark of popular belief.  The place benefits from the highland silence and peaceful atmosphere of the Aizkorri mountain range making it then and now a popular destination for pilgrims and tourists.  It's located in the site where presumably Mary, the mother of Jesus, appeared to the shepherd Rodrigo de Balanzategui in 1468.  This manifestation was termed the Virgin of Arantzazu (there are numerous variations throughout the Basque Country, e.g., Itziar, Begona).  Legend has it, the wooden figure of the Virgin was in a thorn-bush, and his exclamation "Arantzan zu?!" (Thou, among the thorns?!) gave rise to the name of the place. According to the linguistic explanation, the name stems from "arantza + zu", 'place abounding in hawthorn'.  Arantzazu can be found as a Basque female name (e.g.,  Arantza, Arantzazu, Arantxa.  The place is also a starting point for several mountains trails.

Though it did not debut that day in Arantzazu, Urbeltz's vision included the "Apostoluak" (based on those in the Corpus Christi procession of Onati) coming to life.  A year later for the 2009 show of "Axuri beltza" it was presented: 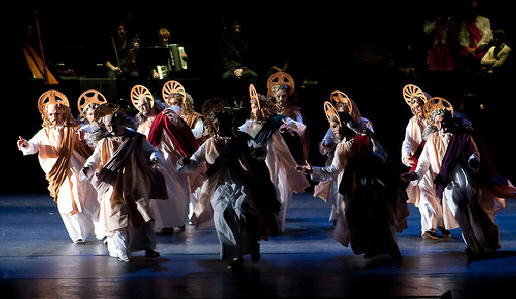