The Last of Their Kind: The Ulacia sisters of Oregon

This article was written by Larry Bingham for The Oregonian (Sept. 20,2008) and it first appeared online at www.oregonlive.com and is reproduced here in case it is re/moved.

Basque sheepherders may be mythologized figures in the American West, but in northeastern Oregon, they're also the last of their kind. Meet the Ulacia sisters

by Larry Bingham, The Oregonian 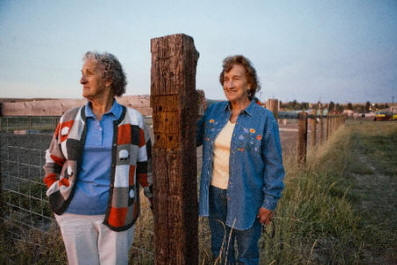 ENTERPRISE -- They walk down a dusty back road as they have for much of their lives, the two sisters who came from the Basque region of Spain to far-flung eastern Oregon half a century ago.

They turn onto the road from the house where one sister lives surrounded by family photographs, kerosene lamps and paintings of lambs. The other lives nearby. Though both are old enough to have retired many years ago, they still tend their yards, split firewood, shovel snow. One even raises two steers in a back pasture.

In their native language, one word describes their character: Indarra. It means "fortitude," "stubbornness," "perseverance."

It's true they no longer walk a few thousand sheep 20 or 30 miles from a rented pasture north of Enterprise into the high mountains above the crossroads of Wallowa where the sheep grazed during summer.

It's also true that one sister, Maria Onaindia, no longer helps with shearing or stays at the ranch on the Snake River to cook for the men during lambing season while the other, Juana Malaxa, remains in town with the kids.

But still they walk.

After decades of tending sheep -- from 1953 until they sold the ranch near the Snake in 1973 -- they have walked so much it has become a part of who they are.

Now their husbands have died, their kids have grown up and moved away, and the sheep business has dwindled to only one big outfit left in Wallowa County. The immigration waves that brought thousands of Spanish Basques to the American West, from the California Gold Rush to the present, have dried up.

Americans eat more beef than lamb, wear more synthetic fabrics than wool. Ranchers don't need as many sheep-herders as they used to. Besides, the economy in Spain is so strong that few young men seek their fortunes on mountaintops a continent away from home.

But still, the two Basque sisters in eastern Oregon walk.

Three-and-a-half miles a day around their frontier outpost is not uncommon. A few times a year, they walk the 12 miles to Joseph and back for breakfast. In winter, says Juana in English learned after Spanish and Basque, they walk with what she describes as something like nails on the bottoms of their shoes.

On this Saturday in early September, they walk the half-mile or so to the Wallowa County Fairgrounds, where they are honored as grand marshals of the Hells Canyon Mule Days Parade.

Organizers help them climb into the back of a red wooden wagon that will lead the parade. On this day, the sisters will ride around town instead of walk. 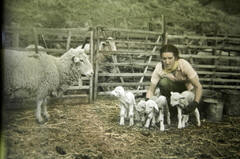 Courtesy of Maria Onaindia at the ranch along the Snake River in the 1950s.

To see them in the wagon, you might think they look enough alike to be twins, though Juana is 18 months older and neither wants her age in the newspaper. They are dressed alike, in matching denim shirts they ironed long before it was time to leave the house.

Newspaper stories about the Basques in the 1920s described the young men and women as dark-haired, dark-eyed strangers who trilled their "R's" when they spoke.

In eastern Oregon, Juana and Maria and their families were always something of a novelty because there were not many other Basques in remote Enterprise. Larger populations existed -- and still do -- in Boise, Bakersfield and Oregon's Ontario on the Idaho border.

Maria's daughter and grandson have come from John Day to see Maria and Tia Juana -- Basque and Spanish for aunt -- in the parade. Juana's daughter offered to come from Boise, but Juana waved her off. "You see me with the mules in the old days. I say, why you want to see me on them now?"

Basques are not philosophical or sentimental by nature, explains Basque historian Richard W. Etulain of Clackamas, who compiled a collection of essays titled "Basques of the Pacific Northwest." They tend to be more practical, he says; also Republican, Roman Catholic, socially conservative.

And like many ethnic groups who came from the Old Country, immigrant Basques like Juana and Maria tend to be hard workers.

The sisters were the fifth and sixth of seven children born to rural farmers. They grew up in a village three miles inland from the Bay of Biscay. Juana milked cows and goats at 5, Maria left home at 12 to work for a family with no children.

Their father, Juana says, taught them early a lesson that shaped their lives: "You know how to work, you'll never be hungry."

Today, they see each other nearly every day, and though they live in separate houses less than a mile apart, they eat many meals together.

Juana is the one who loves to shop. Maria loves to shop only for groceries. Neither cooks as much as she used to. In the days they spent in the mountains, they packed supplies, set up camp, washed clothes by hand. They kept one eye on the children and the other on the bread and fruit pies baking in a 4-by-4-foot wood stove set up in the wilderness.

Neither works as hard as she used to, either. They volunteer at St. Katherine Catholic Church, visit six grandchildren, keep house.

"I can always find something to do," Maria says.

"I got a case of tomatoes looking at me to can it," Juana says. "The wintertime, tastes good." 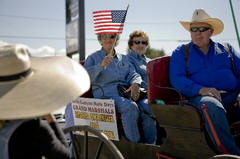 The OregonianMaria and Juana during the 2008 Hells Canyon Mule Days.

Sitting in a wagon and smiling for photographs is foreign to them, but they enjoy the attention as the mules jostle them and the parade begins.

By some standards, the Hells Canyon Mule Days Parade is small. Only 30 or so groups participate. The rules make it clear that no motors of any kind are allowed. You either walk the route, which is a mile or so long, or ride a four-legged creature. Mules are the most popular mode of transportation, thought a pair of oxen, described by the master of ceremonies as "3,200 pounds of hamburger," serve as caboose.

The parade route winds through the heart of Enterprise, a town of about 2,000 people that didn't have as many gray heads when the Basque sisters arrived in 1953.

The parade begins near a sign that warns travelers leaving town on Oregon 3 to check their tanks: "Next Gas 79 Miles." A man circling the wagons on a mule carries his own advertisement. "The True Hybrid," his sign says. "Runs On Corn ... All Emissions Green."

The wagon that carries Juana and Maria rattles past department stores that have come and gone. The sisters wave at strangers. Many of the neighbors they expected to see are not among the people gathered outside the courthouse, the O.K. Theatre, the Ace Hardware Store, the Range Rider Tavern, the Country Quilter.

Some of their fellow sheep-herders have died. Juana and Maria, who will travel this month to Spain to visit a brother and sister who still live in the house where their mother was born, have outlived many of their generation.

They ride along to the sound of clopping hooves. The sky overhead is a clear September blue, and the few clouds on the horizon cling to the far mountains.

The wagon takes them past the nursing home where Juana worked for 20 years after the two families sold the sheep outfit at a time when Hells Canyon was declared a National Recreation Area and sheep-herders became harder to lure from Spain.

The wagon rolls near some of the houses Maria used to clean and not far from the church where the sisters had helped the priest pour tar the day before.

The three-story house where Juana lives is not far, either. It is the same house both families shared when the sisters first came to Oregon as young brides.

Their husbands were Basque sheep-herders who'd come to the United States a few years before. The two men met in New York boarding a flight returning to Spain. Back in Basque country, the men began courting the sisters.

The sisters married Joe Onaindia and Gus Malaxa in a joint ceremony on March 17, 1951, in Spain. 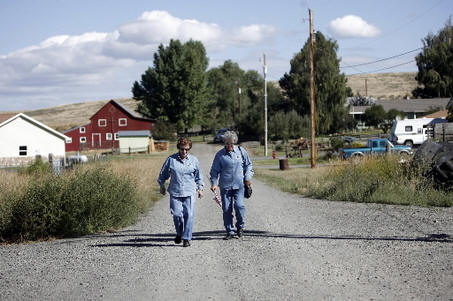 Within a year, Maria, who spoke no English, was bound for Utah. Juana came months later to join the others in Utah, carrying a newborn in her arms.

"I want you to know it was not easy," Juana says. The taxi that took her from the airport drove through fog thicker than any she'd seen. She thought, "What kind of place I am going?"

Their husbands bought into the sheep outfit and moved to Enterprise in 1953. The women learned English as their children -- Maria's daughter and two sons and Juana's daughter -- learned in school.

"When school out, we all go," Juana says of sheep-herding. "Like the gypsies."

"With the legs," Juana says.

Maria's daughter, Juanita Onaindia, was 6 months old the first time she went into the high mountains to spend a summer with the sheep. She remembers a childhood of wide-open fields, winding creeks and mornings of sleeping late -- until 6 a.m. -- to find the camp packed and down the trail, following the early-rising sheep.

As a child, she bathed in creeks, played with horses and talked to shepherds so attached to their herding dogs they nearly cried when they said goodbye and returned to Spain. It was not until high school that Juanita understood how different her family's life was from others.

Juana shakes her head no. "I love the animals, but I tell you the sheep is hard work."

The wagon brings the grand marshals back to the fairgrounds where lunch in the shade by the mule barn awaits, along with a mule auction and other festivities.

It was a bumpy ride but the sisters don't complain.