Can a lasting peace settlement finally be found to the decades-long Basque conflict?  Lehendarkari Ibarretxe believes so, and the President of the Basque Autonomous Government of Euskadi discussed his "Road Map to bring an end to the Basque Conflict." 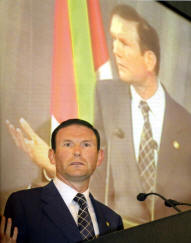 Juan Jose Ibarretxe is the political leader ("Lehendakari") of the three historical Basque regions of Araba, Bizkaia and Gipuzkoa (Navarre has its own autonomous government in Spain and the northern provinces are administered from Paris). He has been in the forefront of trying to bring a final resolution to the decades-long violence in the Basque Country and Spain.  He presented his vision for achieving this at a special forum hosted at Stanford University on February 14, 2008. To read his presentation click on Ibarretxe Stanford presentation.

Included in his presentation (in English) was his offer of a political agreement already made to Madrid, based on a rejection of violence and an embrace of democratic principles and a Basque society plebiscite.  Principal Stanford organizer Prof. Joan Ramon Resina, the chair of the Spanish and Portuguese Departments,  extended the invitation to Ibarretxe in conjunction with the Forum on Contemporary Europe (FCE) as part of an ongoing speaking forum for European political leaders from across the political spectrum.  The FCE is particularly interested in anyone who can address issues of pressing interest.  As quoted in the The Stanford Daily, Prof. Resina believes that “President Ibarretxe’s talk has particular interest in the European context" and that "under certain conditions [Ibarretxe's proposal ppt] could prove to be the elusive tool to negotiate a definitive ceasefire by ETA, which in the last decade has declared 10 long-term truces only to break them later for lack of political progress in the negotiations.”

The symposium was organized by Professor Joan Ramon Resina, the chair of the Spanish and Portuguese Departments (pictured at right with Lehendakari Ibarretxe).

Like most things of this kind, there was controversy around Lehendarkari Ibarretxe's plan for peace. This is no surprise, actually, because parts of it don't go down well with Spanish nationalists.  This conflict has been raging for decades now, so a dispassionate discussion of these matters is possible but rarely probable and this passion reached the Stanford campus (click on  The Stanford Daily).  Protestors circulated a petition to have Stanford cancel this event, but fortunately this was disregarded in the name of freedom of speech and assembly. 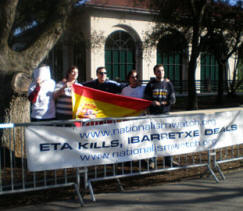 Not all are fans of what Ibarretxe or the Basques are proposing.  A group of pro-Spanish nationalists showed up at the Stanford event, but fortunately there was no real problem. (Photo www.euskalkultura.com )

Tellingly, Stanford organizers of the event were put off by the tone of the critics.  Prof. Resina said the majority of those who have signed the petition come from Spain.  But "the intensity and scope of the unsupported accusations against President Ibarretxe are among the ugliest things I have seen in my long academic life” Resina said. “The organizers of the protest have chosen the path of confrontation rather than the democratic one of discussion with the speaker, according to academic protocol.” Fortunately at the speaking event, there were no disturbances. 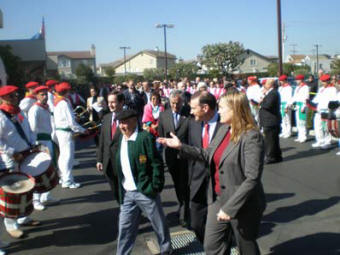