"A Purdy Good Bunch": Volunteers Working to be Basque

Written Sept. 2008 by NABO Facilitator John Ysursa.  Thank you to Linda Indaburu Iriart for the photographs.

We just finished our 2008 NABO Convention in Chino and there again we saw an incredible effort put forth across several days that was really a thing of beauty.  Putting on festivals like this requires a large volunteer force working together to be Basque.

My grandfather Benito Ysursa and oldest brother years ago were speaking about the Notre Dame football team that had just lost a game to Purdue University.  My brother Bernardo Jose stated: "You said that Notre Dame never loses."  My grandfather replied: "Who did they lose to?" to which he was told "Purdue."  My grandfather then quipped in his accented English: "they a purdy good a'bunch" ("they're a pretty good bunch" and thus there was no shame in losing to a team of that caliber).  That line has lived on for years in our family, and I think it's appropriate to apply here in a different sense.  It relates to those who step up and give of their time, treasure and talent to keep our Basque festivals going.

Putting on Basque festivals is labor-intensive, and it requires the work of numerous volunteers.  One such example was just over Labor Day Weekend when the Chino Basque Club celebrated its 40th Anniversary and it served as host of the NABO Convention.  It was impressive to see the number of people throwing in together to make for what was a great weekend slate of events.  We can't cover it all, but below are some highlight photographs that gives you a glimpse of the amount of volunteer contributions on the part of workers and performers that it took to put this festival together.  And while the photos are just from the Chino event, this same is played out all around our Basque communities from Salt Lake City to Fresno, from New York to Seattle ... as volunteers work together to keep the celebration of Basque heritage alive.  The volunteer nature of it all adds a special dimension.  Contributions large and small are required, and when that all comes together to yield a successful festival, it really is something to behold.

So to those volunteer workers and performers, who give of their time, treasure & talent, let's join in the chorus and say "they a purdy good a'bunch!" 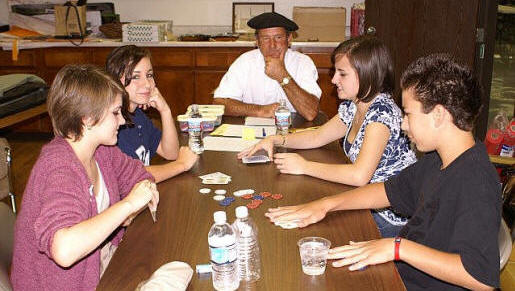 VOLUNTEER COOKS.  Some of the cooking crew for the Saturday night dinner.

VOLUNTEER SERVERS.  Somebody has to be there to serve up the food for the rest of us.

VOLUNTEER HOSTS.  During the weekend there were several contests featuring local and international players.  Those games were hosted by Xabier Aphessetche (pictured center) who renovated his trinketa for the games.

VOLUNTEERS REWARD. All the volunteer work in the world is for nothing, if no one shows up to your event.  Here the efforts of the volunteers was rewarded at the Saturday night dinner show with several hundred showing up.

VOLUNTEER MUSICIANS.  Here is a moment from the Saturday night "Klika in America" which commemorated the contributions of these volunteer musicans from Bakersfield, Chino & San Francisco.

VOLUNTEERS ACKNOWLEDGED.  NABO'S Bizi Emankorra award seeks to acknowledge the contributions of extraordinary individuals to our Basque community.  Though they are no longer with us, the contributions of former NABO Presidents Jean Leon Iribarren (accepted by his son Christian pictured left) & Francoise Pedeflous (accepted by his son Frank Jr. pictured right) are still appreciated. 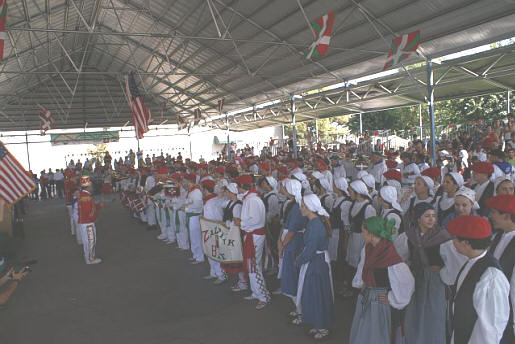 VOLUNTEER PERFORMERS.  All the performers to open the Sunday afternoon program. 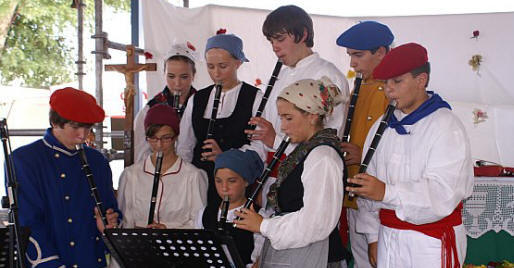 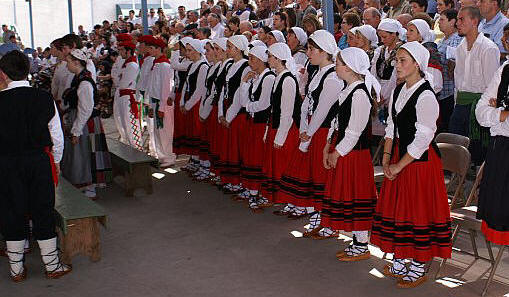 VOLUNTEER PERFORMERS.  Chino men of "Besta Berri" leading in the opening procession for Sunday mass. As always both the American and Basque flags were on display; the former in gratitude for allowing Basques to identify as Basque in America.

VOLUNTEER BAR-TENDERS.  It took dozens of volunteers over the weekend to keep the bar up and running so the rest of us could get our drinks to quench our thirst. 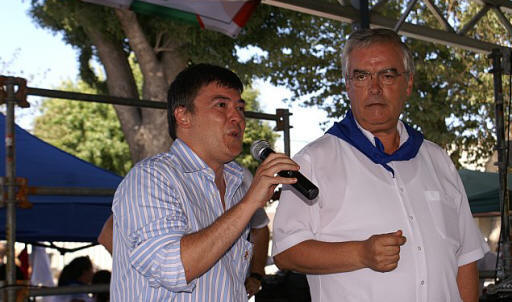 VOLUNTEER SUPPORT. Joining us for the festivities was Josu Legarreta (with the blue bandana), Director of Relations of Global Basque Communities for the Autonomous Basque Government of Euskadi.  They have been and remain supportive of various cultural endeavors including the support of our Basque youth programs 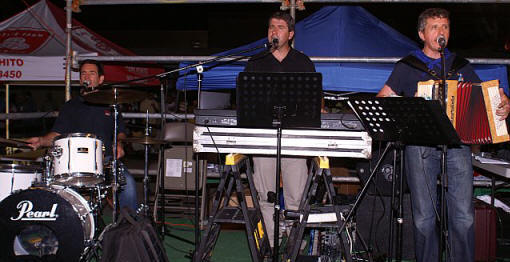 BASQUE MUSIC.  What's a Basque party without good Basque music, and that was made possible with visiting Basque musicians from Europe who played none-stop to the delight of the crowd. 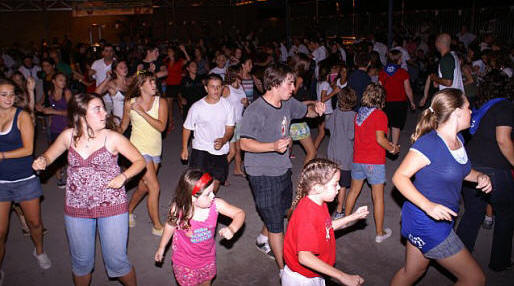 ALL DANCE!  Sunday night dance with the dance floor was packed! 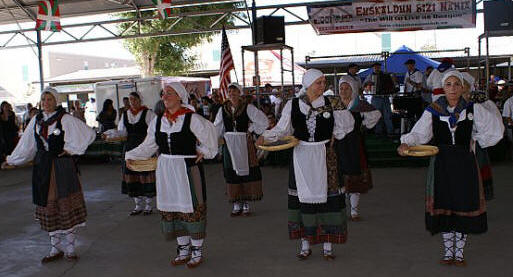 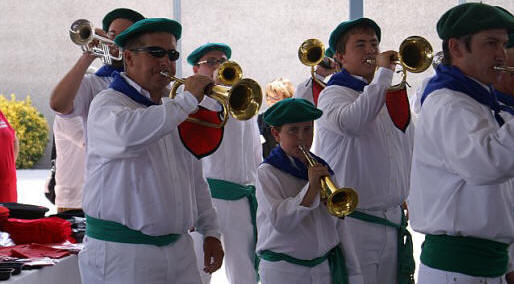 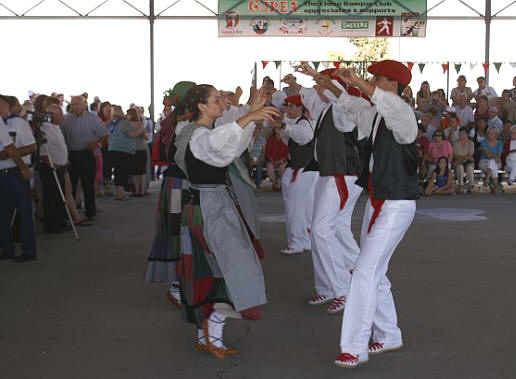 VOLUNTEER DANCERS. Chino's "Gauden Bat" (Let us be one) senior dance group.  In the background is a banner designed by volunteer Stella Arambel. 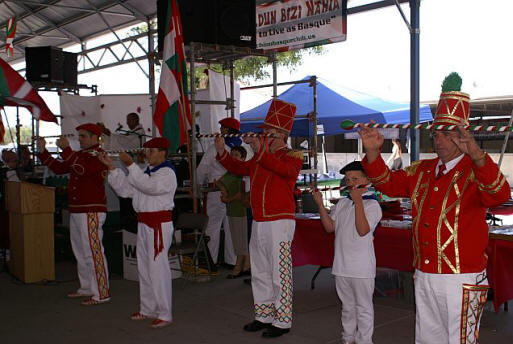 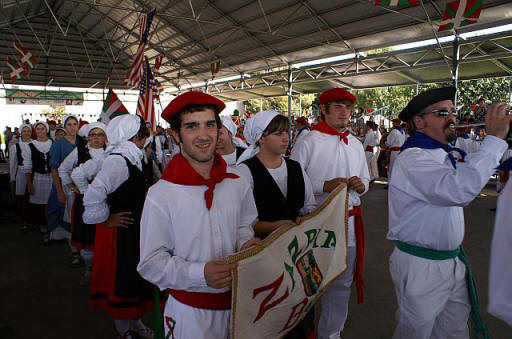 VOLUNTEER PERFORMERS: "Zazpiak-Bat" dancers from Los Banos.  Also pictured playing the trumpet is Pierre Igoa who volunteered his talents to help produce the tribute video for the Klika tribute. 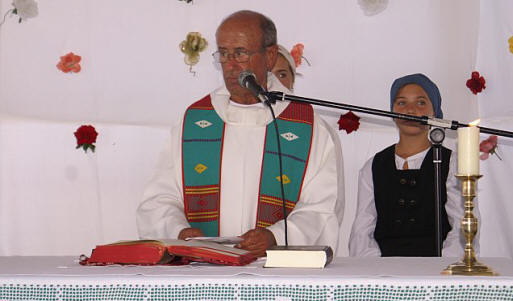 VOLUNTEER PRIEST. It was good to have Aita Martxel Tillous with us again; he made a special trip for the festival.

EUSKAL MESA.  The preparation of mass requires its own particulars and in Chino one of the organizers was Germaine Lanathoua (pictured left).  Also contributing were Basque friends including Johnny Curutchet, bertsolari from San Francisco. 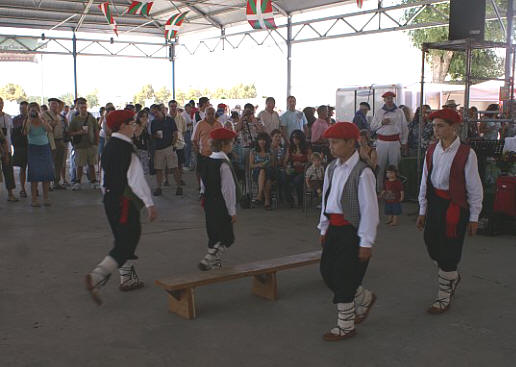 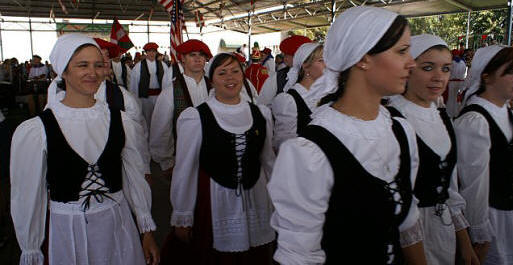 VOLUNTEER DANCERS: This newly-formed combined dance group of males from Bakersfield and Chino called "Hegohaize" (Southern Wind) have been performing for a year together; here they present the "Kaxarranka" from Lekeitio and "Ezpata Dantza" from Xemein.

VOLUNTEER MUSICIANS:  San Francisco Klika.  They were the first Klika in America that was formed. 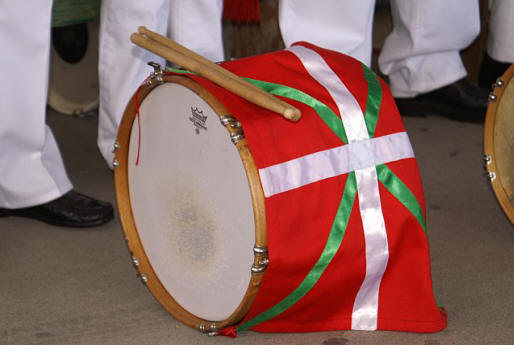 LET THE BEAT GO ON!