Davia Nelson of the The Kitchen Sisters wrote a good story about Basques in general and sheepherding in particular.  It originally aired on NPR's "Morning Edition" on May 29, 2008.  The accompanying website is reproduced here in case it is moved.

Morning Edition, May 29, 2008 · Maybe you've been to Sparks, Nev., to John Ascuaga's Nugget Casino. He's been there for nearly 50 years. We were interviewing Mr. Ascuaga for our story "Liberace and The Trinidad Tripoli Steelband" for our Lost & Found Sound series. He began to tell us about his Basque heritage and what led him to Nevada. The "Hidden Kitchens" series was not on the horizon then, but like we always do, we began asking him about the food of home.

Ascuaga's family is Basque, from the village of Orozco in the Pyrenees.

"My father came in 1900," he said. "All kinds of men came to Idaho, Montana, Nevada, California and New Mexico to become sheepherders. I still keep a flock of sheep to remember my heritage. I have a Basque restaurant in the casino, Orozco. It's the name of my grandfather's village. 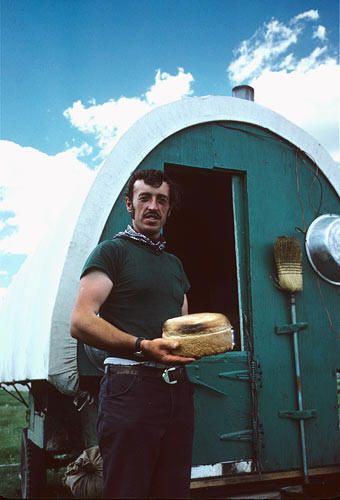 A herder holds freshly baked bread outside his wagon. The sheepwagon is a camp on wheels with beds, a table, and a wood stove. It was pulled in the early days by a team of horses and later by a pickup. Courtesy Basque Library at the University of Nevada, Reno

Many years later I was visiting my Nelson Sister, Jessie, about our upcoming story about the hidden kitchen traditions of the Basque and she said, "Oh, the men out in front, doing landscaping on our house, are two Basque brothers, the Lasartes."

I grabbed the tape recorder, she introduced us, and out of the blue we did an interview that is the center of this story. They spoke, they sang, they whistled. I heard all the calls they have for the sheep dogs that traveled with them over the long treks across the American West.

Francisco and Joaquin Lasarte came to America in 1964 from Basque country in northern Spain. Francisco Franco, the Spanish dictator who repressively ruled the country for nearly 40 years, made life miserable for the Basque people, suppressing their language, culture and possibilities.

The result was a massive exodus, and the only way to come to the United States for many Basque was to contract as sheepherders. There was a shortage of shepherds in the American West, and Sen. Patrick McCarren of Nevada helped craft legislation in 1950 that allowed Basque men to take up this lonely and difficult job.

Neither Lasarte brother had any sheepherding experience when they arrived in America.

"You lonely, you by yourself," Francisco Lasarte said. "My God, you with 2,000 sheep and two dogs and you don't know what to do, where to go." The brothers were contracted for five years to this life. It was a sentence.

Each brother had his own flock, and they rarely saw each other or anyone else for months on end. Mostly they ate lamb and bread cooked in a Dutch oven in a hole they dug in the ground. You can still find these holes up in the mountains of Idaho, Montana, Nevada and California.

"You say Basque to a Westerner and you think sheepherder," said Mark Kurlansky, author of The Basque History of the World. "In Basque country very few people were shepherds. The seven provinces of Basque country are about the size of New Hampshire. No one has huge expanses of land there."

William Douglass, former director of the Center for Basque Studies at the University of Nevada, Reno, describes this solitary life.

"Teenagers were ripped up out of their communities back home, brought to a foreign land, with a foreign language, put up on top of a mountain ... crying themselves to sleep at night during the first year on the range."

The Basques have a family-oriented, communal culture, gathering around big tables to eat, drink and sing. This solitary life in remote mountains ran against the grain.

"Sprinkled throughout the rural newspapers of the American West in the early 20th century," Douglass said, "you get these reports of the mad Basco sheepherder, talking to themselves. Amongst Basques there's this whole vocabulary of madness: the sheepherder who goes over the edge, who becomes sagebrushed or sheeped."

"They had to have a sponsor to come over," Linda Elizalde McCoy said. Her family has run the Noriega Hotel in Bakersfield, Calif., for more than 75 years. It has been the way station to countless Basque shepherds. 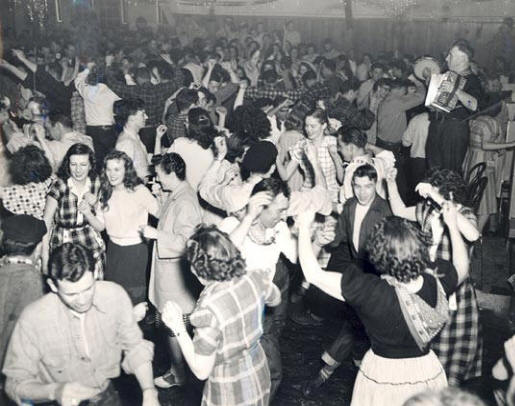 A Home Away from Home

Hotels like the Noriega were home in the winter months for these isolated men. They piled into these Basque boarding houses that sprung up in Elko and Winnemucca, Nev., and Boise, Idaho. The men ate family style — big bottles of red wine, accordion music, conversation and card games.

Bernadette Hirigoyen was a cook at the Noriega Hotel. The dishes included soup, stew, flan, hard chorizo, chicken and paella.

"All the shepherds came there, lots of Bascos," Hirigoyen said. "Just guys, not women. Bascos knew this place; they would help each other find jobs. My grandmother was like a mother to the men in their teens. It was a lively community." 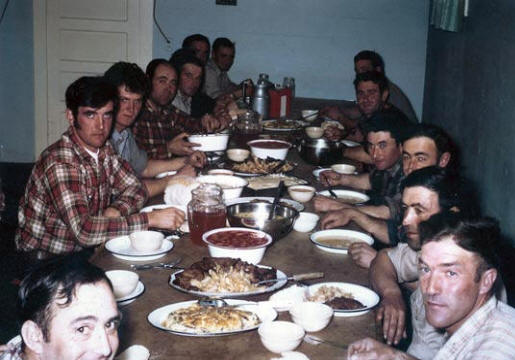 The Basque boarding house was a meeting and resting place for herders who had no other home. Meals were served family style and the owners often would do what they could to help the young men adapt to life in the United States. Courtesy Rosita Ast

The Voice of the Basque

For 25 years, the voice of the Basque was Espe Alegria. Every Sunday night, sheepherders across the mountains of the American West would tune in to listen to her radio show on KBOI in Boise. Alegria's daughter, Rosita Artis, sent us some old recordings of her mother's show. Dedications, birthday greetings, suggestions of where to find good pasture, the soccer scores that her husband got off the shortwave from Spain, and the hit tunes from Spain and the Basque region. She would help the sheepherders with immigration issues, with buying plane tickets home, with doctor's appointments. She did her show for free, but once or twice a year the owners of the sheep camps would give her a lamb. The family would take it home, throw it on the kitchen table, cut it up and put in the freezer.

While working on this story we had the pleasure of working with people at the Center for Basque Studies and the Basque Library at the University of Nevada, Reno. We went to Basque festivals in San Francisco and Bakersfield, to the lively Gernika Bar inside Boise's Basque Center, and the Basque Museum and Cultural Center in Boise, one of the most inspiring places we've been on the "Hidden Kitchens" trail. There we found artifacts, the aspen trees with Basque carvings known as Arborglyphs and the Basque Oral History Collection, Oroitzapenak Memories: Voices from Basque America, which contains dozens of oral histories, many available online.

The Sheepherder's Ball was the highlight of the year in Boise, Rosita Artis tells us. The men wore denim, the women wore simple house dresses.

"You know, you wear gowns and tiaras to a ball. We wore house dresses. That's what we had," she said.

Lambs were auctioned off and proceeds given to a charity. Huge platters of chorizo and stew and pork sandwiches were served. Jimmy Jausoro's band played long sets deep into the night, and the community drank wine and danced. The ball continues to this day every December at the Euzkaldunak Club's Basque Center.

Original links to the NPR story