Essentially unique among American ethnic groups, only in the American West did one group of people become so exclusively identified with just one occupation:  Basques & sheepherding.  So now you know why those Basque BBQ's always feature lamb!

Anyone who has driven the high desert ranges of the West has pondered how someone could possibly live there.  It's possible, but the life was very demanding, compounded by the reality that sheepherding as an occupation was not favorably looked upon.  Basques took the job because it offered them economic opportunity.  These hundreds of herders tended bands of sheep for months on end in a harsh, desolate environment.  They were usually all alone.  It was not an easy existence, but thanks to their perseverance their descendants were able to enjoy a better life here in America.

Ironically these Basque newcomers knew little or nothing about herding sheep; they literally learned on the job.  They did so well that they quickly became sought after by sheep outfits while some Basques moved into positions of ownership that together initiated the practice of bringing over other Basque young men.  Many obtained U.S. citizenship, and trips to the Basque homeland now became vacations often with the primary purpose of finding a Basque wife.

While shepherding served as the foundation of the Basque community for many years, today few Basques remain active in the sheep industry.  By the 1970s the Basque involvement in the sheep business began its decline.  Various factors contributed to this transformation, beginning of course with the immense challenges posed by the occupation that thrust the herder into "one of the loneliest professions in the world."  A domestic struggle over the use of public land which resulted in the limitation of livestock grazing permits, improved economic conditions in the Basque homeland, recruiting efforts shifting to Latin America and changes in the livestock industry that favored cattle to sheep ranching effectively brought an end to a 150 year story.

But sheepherding was always just a means not an end for most Basques.  Thus the children and grandchildren of the herders have diversified into many careers.  As William Douglass noted, "the work ethic, business integrity and success of Basques in a wide variety of walks of life resulted in their being viewed in the region as one of its unique cultural and economic assets." 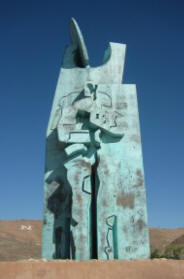 The monument to the Basque sheepherder is located in Reno, Nevada.  Entitled “Bakardade,” or “Solitude” by its author -- noted contemporary Basque sculptor Nestor Basterretxea -- the artwork was conceived as a statement about the past by the present to the future.

In the design, the solitary figure of a shepherd carrying a lamb is suggested rather than depicted.