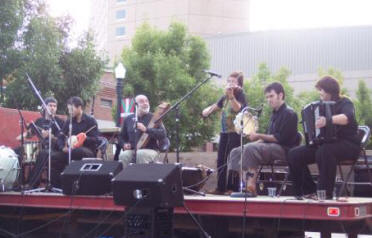 Once or twice a year the Autonomous Basque Government of Euskadi sponsors a cultural tour to provide our communities an opportunity to experience some of the latest work of Basque entertainers. Juan Mari Beltran and his eight member band play a wide variety of Basque tunes using traditional instruments with a contemporary flair to re-contextualize Basque traditional folk or "roots" music.

Mr. Beltran is very accomplished musicians and teacher: he taught music for many years in the Basque Country, he succeeded in creating a Museum of Basque Musical Instruments in the town of Oiartzun; he recorded several albums, produced a television program and wrote a book on Basque musical instruments.  This  Cultural Tour is made possible by the support of the Basque Autonomous Government of Euskadi and the Basque communities of Boise, Seattle & Vancouver.

Beltran is the real deal when it comes to traditional Basque music!  Come hear the music of Europe's oldest people played in great fashion!

His tours were in Boise, Seattle and Vancouver, Canada