Please join the Basque Educational Organization at the San Francisco Basque Cultural Center this Friday, September 9th, at 7:30pm for another installment of its Basque Film Series. Friday’s film is Soinujolearen Semea (The accordionist’s Son) directed by Fernando Bernues.  The film is based on the novel by Bernardo Atxaga, and is a story of “friendship, forgiveness and the power of truth.”  The event is free, and open to the public.  For more information on the film, click here.

THE ACCORDIONIST'S SON trailer from Filmax on Vimeo.

Happy Day of the Basque Diaspora!  As you may know, the Basque Government has organized an institutional event in Donibane Garazi (St. Jean Pied de Port) in the marketplace with the participation of Lehendakari Urkullu, the mayor of Donibane Laurent Inchauspe and a number of other officials.  NABO will be well represented at the event by Pierre Etcharren.  The event begins at 6pm Basque Country time, or 9am PST, so if you would like to watch the livestream, here is the link. 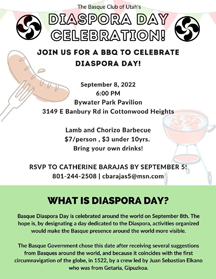 Many NABO clubs have also planned events to mark the date.  For example, the Basque Club of Utah has organized a BBQ at 6pm on September 8th at the Bywater Park Pavilion.  The menu will include lamb and chorizo and costs $7 for adults and $3 for children, and is BYOB.  Please RSVP by emailing Catherine Barajas.  The Basque Museum and Cultural Center in Boise has planned a Pintxo Class also on the 8th from 5:00pm-6:30pm.  Edurne Arostegui leads the class and cost to participate is $25 per person to offset the cost of ingredients.  If you would like to participate, please register by clicking here. For complete information, or if you have any questions, please email Edurne. The Elko Euzkaldunak Basque Club has planned a pintxo pote at the Ogi Deli and the Star Hotel from 7-9pm. For complete information, visit them on Facebook. Oso ondo pasa gure Diasporako Eguna! 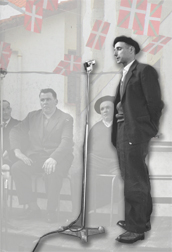 As we reported last week, at our latest NABO meeting held in New London Connecticut, a new initiative, Arnas Berri Bertso School, was presented and accepted by the NABO delegates.  Todor Azurtza, instrumental in the initiative, has shared the following information with us. If you would like to participate in the program, please email Todor at the email below.

“At the August NABO Convention delegates approved the implementation of the “Bertsolaritzari Arnasa Berritu Amerikan” (give new breath to Bertsolaritza in America) initiative to preserve, promote and perpetuate our Basque oral tradition in North America. Chaired by Martin Goicoechea, the initiative will consist of an annual international bertso event gathering local and Basque Country performers, periodic local events organized ad-hoc or as part of the Basque picnics and festivals, and a Bertso school. As agreed, we are starting to launch the different initiatives. For instance, the first bertso event will be held in Kantari Eguna in October in Rocklin and the next in October in Boise.

The Arnas Berri Bertso Eskola will start end of September, opening its doors to all Basques in North America. The classes will be taught in the Boise Basque Center, but students can also participate online. Our plan is to teach a 1-hour class per week, 12 weeks in the fall and 12 weeks in the spring, in line with the Euskara classes calendar. However, we might adjust the length of the academic year and the schedule depending on the students and their constraints. Students need to have a good knowledge of Euskara in order to be able to play with the language (this will not be a Euskara class). Beraz, bertsotan edo kopletan Euskararekin eta Euskaraz jokatzeko gogoa baduzue, Arnas Berri Bertso Eskolan parte hartzera gonbidatu nahi zaituztegu. Izena emateko arnasberri@gmail.com helbidera mezu bat bidali lehen bait lehen. Eskerrik asko!”