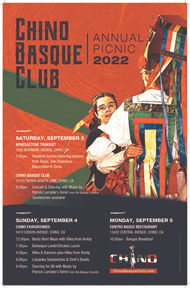 Join the Chino Basque Club this weekend to celebrate its annual picnic September 3-5, 2022. The festivities will begin on Saturday at 1pm, at the Aphessetche Trinketa, with pilota matches between teams from Bakersfield, Boise, Chino, and San Francisco. At 6pm, the activities will move to the clubhouse for a concert and dance to the music provided by Patrick Larralde’s group, “Zirimiri” from the Basque Country. Sunday will begin at noon with mass with the participation of local dancers and the Klika from Iholdy. Lunch will be served at 1:30pm, followed by entertainment provided by the dancers, the local Klika and again from the Klika from Iholdy. Dinner will be served at 6pm and will include lukainka sandwiches and Chef’s Bowls, followed by the dance at 8pm again to the music of Zirimiri. The traditional Basque Breakfast will be served on Monday, beginning at 10am at the Centro Basco. For a complete schedule of events, please click here. 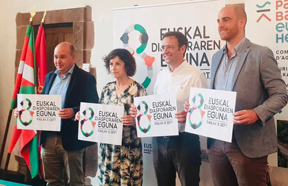 For the fifth year in a row, the Basque Government has organized an institutional event to mark the Day of the Basque Diaspora, September 8th. This year, the event will take place in Donibane Garazi (St. Jean Pied de Port) with a joint event with the Commonwealth of Iparralde, recognizing “the cultural reality that unites Basques from abroad, and both sides of the Pyrenees.”  The event will include the participation of Lehendakari Urkullu, Jean-Rene Etchegaray, President of the Community of the Agglomeration of Iparralde, as well as the mayor of Donibane Garazi, Laurent Inchauspe, and the Basque Government’s Secretary General of Foreign Affairs, Marian Elorza, and the Deputy Councilor for Cross-Border, European and International Cooperation, Joseba Erremundeguy, among others. The event will be livestreamed, and will also include special recognition of the sister city relationship between the Basque community in South San Francisco and Donibane that is celebrating its 10th anniversary this year. If you are in Donibane, please join them in the market place on Thursday. Many Basque clubs in the US have also planned events to mark the day including Basque communities in Boise and Salt Lake City. If your club has planned an event, please share it with us so we can share it next week. 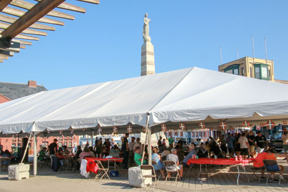 On August 26th and 27th Basques from the Basque Country, Canada, France and the US gathered in New London, CT to celebrate NABO’s annual convention meeting and festivities hosted by the New England Basque Club. The weekend began on Friday with NABO’s meeting held at the Holiday Inn, with representatives from 38 of the total 42 NABO member clubs attended either in person, or via Zoom. President Philippe Acheritogaray presided at the meeting that was also attended by representatives from the Basque Government including Benan Oregi, NABO longtime friend from the Directorate for the Basque Community Abroad, and Unai Telleria, the Delegate of the Basque Country in the United States. This was Unai’s first opportunity to attend a NABO meeting in person and so everyone was very happy and honored to be able to meet him. Three representatives from NABO’s newest club, St. Pierre et Miquelon, were also in attendance, another great opportunity to learn more about their activities and community. Jeff from Safe Harbor Brewing also presented us with various beer cans sporting NABO club logos, sharing information on how they are ready to ship customized beer to any Basque event across the country. Other highlights of the meeting included the presentation of a new Bertsolaritza program in NABO spearheaded by Todor Azurtza in Boise, Idaho, and former NABO Euskara Chair, Martin Goicoechea. We will provide more information on the program in upcoming issues . NABO’s Bizi Emankorra Award was also presented to Juan Mari Aramendi, former NE Basque Club President and promoter of the Basque culture in that area; along with Noël Fagoaga, longtime member of the Euskaldunak Quebec, promoter of Basque culture and keeper of the rowing tradition in that area, and Roberto Guerenabarrena for his longtime involvement in the New England Basque Club. Officer elections took place with Philippe Acheritogaray and Mayi Petracek retaining their positions as NABO President and Treasurer respectively. [View meeting gallery]

After the meeting adjourned, many delegates had the opportunity to try their rowing talents in the Trainera that the Euskaldunak Quebec crew generously brought along. [View Trainera gallery] Friday evening the festivities moved to Hot Rods Café where everyone enjoyed great food and drink, and danced to the music of Amerikanuak. [View Friday night gallery]

Saturday began with another opportunity for the rowing crew, again thanks to Euskaldunak Quebec, and a Mus Tournament. At noon, the official opening ceremonies took place with the raising of the Ikurriña at the Parade Plaza, and greetings from NE Club President, Ander Caballero, Unai Telleria, and Mayor Passero. [View celebration gallery] The afternoon continued with a paella lunch, herri kirolak including wood chopping, and a txinga contest, as well as much more dancing to the music of Amerikanuak. [View herri kirolak gallery] The event was even covered by local and international media with articles appearing in Berria, and the local The Day newspapers. In sum, all had a wonderful time. On behalf of everyone at NABO, we would like to thank, and congratulate the NE Basque Club on a wonderful event. Zorionak Deneri, eta Eskerrik Asko Bihotz Bihotzetik!