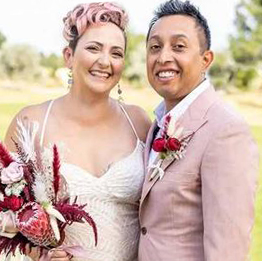 We would like to take this opportunity to congratulate our Euskara Coordinator, Sonia Castañon, on her recent marriage to Tony Barajas, both members of the Basque Club of Utah.  The ceremony took place in Gooding, Idaho with the couple surrounded by many family and friends. On behalf of everyone at NABO, we would like to send our very best to the couple wishing them many years of health and happiness together. Zorionak Bikote!

Next weekend, August 26-27th, the New England Basque Club will host the 2022 NABO Convention in New London, CT, in conjunction with its annual Basque Fest.  The weekend will begin with the annual NABO Convention meeting on Friday, at the Holiday Inn beginning at 10:30 EST, or 7:30am PST. Delegates representing the 42 NABO member clubs, will gather in person as well as via Zoom.  Among the items of business is the election for president and treasurer, held at every convention meeting.  Incumbents Philippe Acheritogaray, and Mayi Petracek will retain these positions, respectively, as the only two running this year.  NABO will also award its annual Bizi Emankorra Award to Juan Mari Aramendi, Noël Fagoaga, and Roberto Guerenabarrena, three very deserving recipients.

Saturday’s festivities will begin with a Trainera exhibition, followed by a Mus Tournament.  The opening ceremonies will begin the official events at 11:30am that will include lots of good food and drink, music provided by Amerikanuak, and Herri Kirolak including harri jasotzea (stone lifting), aizkolaritza (wood chopping), lokotx biltzea (corn cob racing), txinga (weight carrying), sokatira (tug-of-war), and Igunde.  For more information, visit them on Facebook.

Thanks to our friends at the Chino Basque Club, we found out that Wordle is also available to play in Basque.  This word game, that has become very popular in the states, challenges the player to guess a five-letter word in six tries.  Want to give it a try?  Click here. Sorte on!