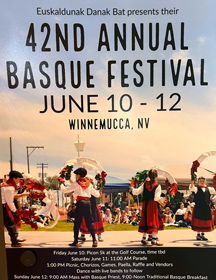 The Euskaldunak Danak Bat Basque Club in Winnemucca, NV will host its annual Basque festival this weekend, June 10-12 at the Convention Center.  The weekend will begin with a kickoff on Friday June 10th with a Picon 5K at the Golf Course.  The fun continues on Saturday with a parade beginning at 11am, followed by a picnic beginning at 1pm.  The afternoon will include games, raffles and vendors complete with Chorizos and Paella, and performances by the local dancers.  In the evening, there will be a dance to live music.  Sunday will begin with mass celebrated by Aita Antton at 9am, followed by a traditional Basque Breakfast.  As always, mass will be livestreamed on the Artzai Ona Facebook page, or will be available to view later. For more information, please visit them on Facebook.

Our friends at Txintxua Films who produced Bertsolari and Amama, have now produced a new drama series called Intimacy that will be available on Netflix beginning on June 10th.  The series that stars a very well-known Basque actress, Itziar Ituño, is available to watch dubbed in English, or it is original Castilian version, or with English subtitles.  To learn more about the series, and its cast, click here.