Dardara to be Featured in BEO Film Series

The Basque Educational Organization (BEO) will host another installment of its Basque Film Series with the documentary “Dardara” (Trembling) this Friday, May 6, 2022 beginning at 7:30pm.  The film focuses on the lyrics and reflections of Gorka Urbizu, Berri Txarrak’s songwriter for a quarter of a century.  Dr. Larraitz Ariznabarreta from the Center for Basque Studies will introduce the film as well as lead a discussion afterwards on Zoom. For more information on the film and the event, please click here. 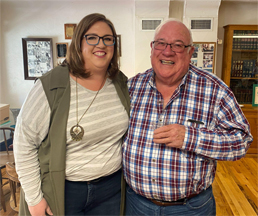 During this Mus Season, we wanted to let folks know that there are other card games that Basques excel at including Briska.  As such, we are pleased to announce that our Vice-President, Annie Gavica, and her father Richard Gavica, were the winners of the Euzkalduank Briska Tournament in Boise. The tournament began with 17 teams competing, and ended with five teams who competed on April 23rd at the tournament finals.  At the end of the day, Annie and her father were victorious! Zorionak to everyone who participated as well as to Annie and Richard! Biba zue 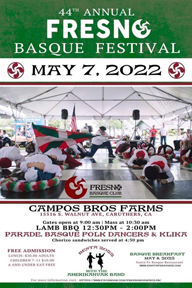 The Fresno Basque Club will host its annual festival this Saturday, May 7th at the Campos Brothers Farm. Gates will open at 9am and festivities will begin with mass at 10:30am celebrated by Aita Antton.  Mass will be livestreamed on the Artzai Ona Facebook page, and will be available to view afterwards as well (Aita will not be streaming Mass on Sunday).  Lunch will be served after mass, cost of the meal is $30 for adults and children between the ages of 7-11 $10, while kids under the age of six eat for free. After lunch, the Basque club dancers will perform, and kids can play in the bounce houses.  This is an open family-friendly event and all are invited.  There is no admission fee.  For complete information, and directions, visit them on Facebook.