Our friend at EuskalKazeta, Nancy Zubiri, reached out to let us know that she has been featuring articles by our Music Programs Director, Mikaela Goicoechea, who is currently in the Basque Country studying Basque at Maizpide Barnetegi. To read about her experiences, click here. Zorionak Mikaela, biba zu!

The Los Banos Basque Club is proud to announce that it has created a new website. The new site features various sections including the club’s history, dance group news, events, board members, and the newsletters are also available there, among other items. On behalf of everyone at NABO we’d like to congratulate everyone on the great website! Zorionak deneri!

Lehendakari Urkullu Met with Advisory Board in Gasteiz 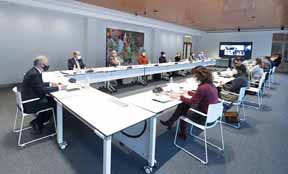 On January 18th, Lehendakari Urkullu met with his Advisory Board that includes representatives from Basque clubs in the Diaspora. Representing North America and Saint Pierre et Miquelon was our own Jean Flesher, accompanied by Arantxa Anitua representing South America, and Unai Lauzirika representing Europe and Asia. Also attending were Gorka Alvarez, Director of the Basque Community Abroad, and Benan Oregi from the same department, and Marian Elorza, the Secretary General of Foreign Action. In his opening remarks, Lehendakari Urkullu stressed the Basque Government’s commitment to continue collaborating with Basque communities abroad, and recognized the great achievements that have taken place during the pandemic including Euskadi Basque Country 2025 International Framework Strategy, the Post Doc in Diaspora Studies, the Han-Hemen Initiative, as well as progress being made in updating the law that allows the Basque Government grants to Basque clubs to continue, to name a few. Urkullu also noted that "We will always keep the victims of COVID-19 in the Diaspora in mind.” As such, the Basque Government organized an event last Wednesday where a wreath was laid at the Sempervirens Park in Vitoria-Gasteiz in memory of the victims of the pandemic in the Diaspora. Accompanying Marian Elorza and Gorka Alvarez was the mayor of Vitoria-Gasteiz, Gorka Urtaran, and representatives of the Euskal Etxeak, accompanied by a band of txistularis.