The Basque Club of Utah organizes a dinner/dance every year that serves as one of its main fundraisers.  This year, the dinner/dance was to be held on January 29th, however due to increasing COVID cases, the board has decided to postpone this year’s event until April 23rd.  In March, they will make the determination whether it will be an in-person event, or if it will be a drive-through event like last year.  If you have already made reservations for the January 29th event, please contact Cirbie Sangroniz.

On December 16th, Pete Cenarrusa’s birthday, the Cenarrusa Foundation awarded its 2021 Cenarrusa Award to Basque Chaplain Aita Antton Egiguren, and to the Mayor of Gernika Jose Mari Gorroño.  These awards were created in 2020 to honor individuals or institutions who exemplify “Pete Cenarrusa’s numerous contributions to public service through notable achievements in government or nongovernmental organizations, and/or the advancement of agricultural and rangeland innovation, and/or of the Basque culture and expression.”  The board of directors chooses the awardees from nominations made between October 1-November 15th by the general public.  Awardees receive a symbol of Pete’s attributes and a one thousand dollar stipend. For complete information on the award,  and how to nominate individuals, please visit their website. On behalf of everyone at NABO, we would like to congratulate this year’s recipients.  Zorionak Aita Antton eta Jose Mari! Merezi duzue eta!

Museum of Basque Sheepherders in America Inaugurated in Elgorriaga 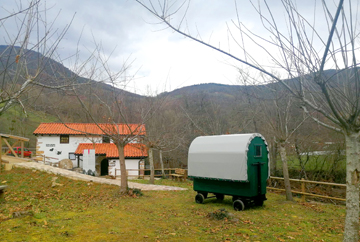 The “Euskal Artzainak Ameriketan Museoa” (Museum of Basque Sheepherders in America) was inaugurated in late December in Elgorriaga at a ceremony attended by local mayor, Ane Otxandorena; President of the Parliament of Navarre, Unai Hualde; Joxe Mari Aierdi, Vice President of the Government of Navarre; Laura Igantzi, representing the Euskal Artzainak Ameriketan Association; as well as Gorka Alvarez Aranburu, Director of the Basque Government’s Directorate of the Basque Community Abroad.  The Aurresku was performed by Itsaso Estanga Otxandorena, granddaughter of a herder who emigrated to California accompanied on the txistu by Miren Martin and Maribel Makuso.  Laura Igantzi thanked everyone who made the museum possible whose main goals are to give witness to the “special relationship that Basque emigrants have maintained in the 19th and 20th centuries with the Western United States, and to preserve their knowledge and memory, giving an account of the reality and way of life of Basque sheepherders in North America.” Everyone present was treated to a tour of the museum that will remain open on weekends, as well as available for school field trips.  For more information on the event and the museum, click here. Zorionak deneri!