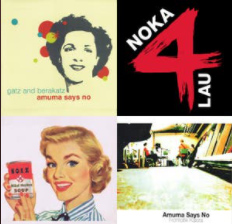 This week NABO’s Music Programs Director, Mikaela Goicoechea, has provided a new Spotify playlist for your enjoyment.  This one features Basque-American artists whose music is also available on Spotify. If you would like to check it out, click here. On egin!

A virtual workshop entitled, “Basque Country-USA: Evolution and Future Relationship,” will take place on March 2, 2021 and March 4, 2021, as part of the “Euskal Herria-Basque Country Internationalization and its Global Perspective” seminar co-organized by the Telesforo Monzon eLab and the Sabino Arana Foundation.

The workshop includes the participation of many of our NABO friends, who have served as NABO delegates, or who are part of our NABO member organizations including Jean Flesher, well-known in the US Basque Diaspora, as well as serving as North America’s representative on the Lehendakari’s Advisory Board; Argia Beristain, who has represented several clubs over the years, and has recently been pivotal in bringing Athletic to Boise to play during the last Jaialdi, as part of the Basque Soccer Friendly initiative; as well as Xabier Berrueta, President of the United States Federation of Pelota, among many of the hats he has worn in his involvement in NABO. The current director of the Center for Basque Studies, Xabier Irujo, joins them, as well as a number of other familiar faces including Marian Elorza, Secretary General of Foreign Action in the Basque Government, and former Lehendakari Ibarretxe.  The aim of this workshop is “to discuss matters related to the challenges and the opportunities to build bridges among the Basque Country and the US Basque Diaspora.”

The workshop will take place on Zoom on both days beginning at 5pm European Time, or 8am (PST).  If you would like to attend the workshop, prior registration is required by clicking here. For more information on the workshop including the schedule, click here, or to read more about the speakers, click here.