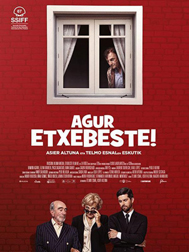 The Basque Educational Organization invites everyone to join them this Friday night for its Basque Film Series featuring Agur Etxebeste!  beginning at 7:30pm at the Basque Cultural Center. This is the sequel to the 2005, Basque comedy hit Aupa Etxebeste! directed by Asier Altuna and Telmo Esnal.  The film tells the story of beret maker Patrizio Etxebeste in his new role as town mayor and discovering that it isn’t as easy as he had thought.  Faking an illness to resign before a scandal occurs, he passes the baton to his wife Maria Luisa hoping that she’ll follow his orders. When that isn’t the case, chaos ensues.  For complete information on the movie, click here.

Memorial Mass and Lunch in Chino

The Chino Basque Club will host its annual Memorial Mass and Club Lunch this Sunday, November 21st at 10am at the clubhouse.  Father Joseph Pilotin from St. Paul the Apostle Church will celebrate mass that will include the traditional memorial slideshow.  There will be lunch after mass, $20 for adults and $10 for children, and the deadline to RSVP is this Friday November 19th at 5pm. Parking is limited so they are asking all able-bodied people to please park on the street, which is permitted by the City of Chino.  For complete information, or to purchase a lunch ticket, click here.

If your website has the .eus domain, you can now translate the content into Basque using Elhuyar’s Elia Automatic Translator.  Elia is a plugin that works on websites developed using the WordPress platform and is available to any website with a .eus domain.  To get started fill out this form, and then download the plugin. There is also a help guide for your convenience.  If your website isn’t on the .eus domain yet, but you’d like it to be, you can register it here. If you have any questions please contact them through their website.

Last Saturday, NABO held its annual Fall Meeting virtually.  Thirty-six of NABO’s 42 member clubs were represented, along with representatives from the Basque Government, Benan Oregi, and the Delegation of Euskadi in the US Delegate, Unai Telleria, also attending. Guests attending included Iñaki Arrieta, head librarian at the Jon Bilbao Basque Library.  The meeting began with a moment of silence in honor of Mary Gaztambide, who passed away in October in Salt Lake City.  Mary had served as NABO President as well as the Basque Club of Utah’s delegate for many years.  Goian Bego. Highlights of the meeting included a report from Benan on the current Basque club grant situation, as well as reminding us of the newly established Specialization in Basque Diaspora Studies, a certification that is the fruit of collaboration between the Basque Government’s Directorate of the Basque Community Abroad, and the University of the Basque Country. The agenda then continued through NABO Program and Committee Reports, followed by Basque Library Updates provided by Iñaki. This report included information on how the Basque library has been working on documenting the effects of the pandemic on Basque clubs and entities, research done with the help of Joana Arrechea who volunteered at the library this summer. He also reported on the availability of family stories through Digital Collections, and encouraged anyone else with such stories to share them.  Traditionally the fall meeting is when the Facilitator and Euskara Coordinator are hired, and so Kate Camino and Sonia Castañon were reappointed in these positions respectively.  The meeting concluded with taking a look at future meetings.  The winter meeting will take place in San Francisco in conjunction with the Basque Cultural Center’s 40th anniversary, and this summer the NABO Convention is being hosted by the New England Basque Club in New London in August (TBD). 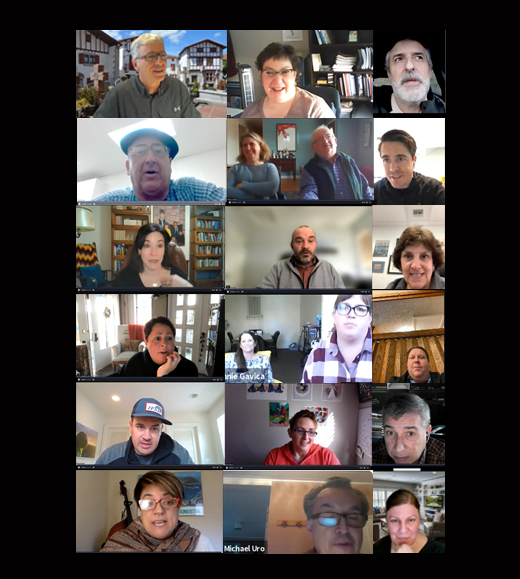