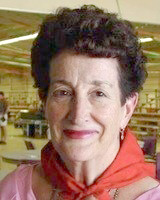 It is with great sadness that we share the news of Mary Gaztambide’s passing in Salt Lake City.  Mary was not only a pillar in her local Basque community, but also served at the NABO level, working tirelessly for the better part of 40 years to perpetuate the Basque culture in the US.  Prior to her NABO involvement, Mary was a cofounder of the Basque Club of Utah and was a dedicated dance mom, traveling with her family in their motorhome to Utah’ko Triskalariak performances at Basque picnics all over the west. She also served as the Basque Club of Utah President and her residence served as the unofficial Basque clubhouse for years.  The highlight for many was going to the Gaztambide’s on Sunday after the club’s annual dinner dance, enjoying leftovers, Mus, and camaraderie. Her NABO involvement began in 1996, when she became a delegate for the Basque Club of Utah, with her husband Jean (+2018).  She was elected as NABO President in 2004, an office she would hold until 2009, and then served as NABO Vice-President from 2009-2017.  As a NABO Officer, the Basque Government invited Mary to participate in the 2003 World Congress of Basque Collectivities as a delegate, and in 2007, she was again part of the US delegation. For all of her efforts, NABO recognized Mary in 2012, at that year’s annual convention in Elko, and presented her the Bizi Emankorra, or NABO’s lifetime achievement award.  Mary is survived by her children Marc (Josette), Denise (Mary), Danny (Brooke) and her grandchildren Marcel (Bria), Danielle, Madeleine and Mikel, all of whom continue to be involved in the local Basque club.  Her dedication to the transmission of the Basque culture to future generations is evident in this video filmed in 2015, for the local Living Traditions Festival.  Services will be on Friday, October 29, 2021 beginning with a rosary at 10:30 am at St. Vincent De Paul Catholic Church, followed by a funeral mass at 11:00 am with a reception to follow. Attendees are requested to wear a mask at the indoor gatherings. In lieu of flowers, donations can be made to the Basque Club of Utah, c/o Catherine Barajas, 2323 Green St., SLC, UT 84106 or to the Huntsman Cancer Institute. in Holladay, Utah.  Mary’s complete obituary is available here. On behalf of everyone at NABO we extend our heartfelt condolences to her children, grandchildren, and to her extended family, as well as to her many, many friends.  We will miss your strong embraces Mary. May you rest in peace, Goian Bego.

The Los Banos Basque Club will host its annual Mus Tournament this Saturday, October 23rd at the Wool Growers Restaurant.  Registration begins at 8am with tournament play beginning at 9am.  You must be a club member to participate, and the cost of the tournament is $15 per person.  There will be a no host bar and lunch.  For complete information, visit them on Facebook.

We also learned this week that Gaztemundu, the Basque Government program aimed at Basque youth in the Diaspora, has been cancelled for the second year in a row due to the pandemic.  The note says, “Although things are improving and we are gradually returning to ‘normality,’ international mobility does not present the conditions for young people from Basque communities around the world to participate in the Gaztemundu Program with full guarantees and equality.” The Directorate of the Basque Community Abroad is already working on next year’s program, details of which will be provided as they become available.