This Sunday, September 5th, Aita Antton will celebrate mass at 8:45am from his parish, St. Patrick’s Parish and Our Lady of Mercy in Merced.  Mass will be celebrated for the intentions of the Basque community in Chino who will be celebrating their annual picnic this weekend.  Mass will be livestreamed from the Artzai Ona Facebook page and there will be a special remembrance of their dearly departed as well. 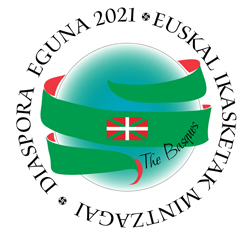 In honor of the Day of the Basque Diaspora, September 8th, Basque Studies at BSU will host “Diaspora Eguna Mintzagai/Diaspora Eguna Conversation,” which aims to “generate conversation and inspire innovative collaboration in Basque Studies.” The event will be virtual on Zoom, beginning at 8am (MST), 12:00pm Buenos Aires, and 4pm in the Basque Country.  To date 18 representatives from Basque entities around the world will give a brief presentation, along with 12 graduate students (MA and Ph.D) who will present their research.  For complete information, including a list of presenters, and Zoom link, visit their website.

This last weekend, the North American Basque Organizations held its annual convention meeting at the San Francisco Basque Cultural Center in conjunction with the SFBCC’s annual Udako Besta.  The festivities began on Saturday morning with the NABO meeting with 25 individuals attending in person, and another 25 via Zoom.  Highlights of the meeting included presentations from Gorka Alvarez, Director of the Basque Government’s Directorate for the Basque Community Abroad, Sabin Bikandi from the Aiko dance school, and Argia Beristain on behalf of the Ateak Ireki Program.  Jean Flesher, the North American delegate to the Lehendakari’s Advisory Council, also updated us on business discussed at their latest meeting.  Officer elections held at the summer convention meeting also took place with Philippe Acheritogaray and Marie Petracek being reelected as NABO President and Treasurer respectively.

After lunch, the action moved to the Kancha with mixed doubles pala featuring a team from Boise against a team from San Francisco along with a handball game with local players.  A barbecue dinner followed with dancing afterwards to the accordion music of Iñaki Reta with Robert Iriartborde on drums.

Sunday started with a Basque mass celebrated by Father Rene Iturbe and concelebrated with Father Antton Egiguren, who also live streamed the mass.  This was followed by the Basque Cultural Center presenting Father Iturbe and Aita Antton honorary lifetime memberships, and also recognizing two past SFBCC board presidents, Gracian Goyhenetche and Jean-Pierre Cabalette.  The Zazpiak Bat Klika and Zazpiak Bat Dancers performed as did the Elgarrekin Choir.  Sunday’s event concluded with a barbecue lunch. Photos courtesy of Philippe Acheritogaray.