Winnemucca’s Euskaldunak Danak Bat Basque Club would have hosted its annual picnic this weekend, but like so many other clubs, they decided to cancel this year’s event in an abundance of caution. Not letting the date pass unnoticed, Aita Antton will remember this Basque community and their dearly departed at the mass he’ll celebrated on Sunday, June 13th that will be livestreamed beginning at 8am (PST) from the Artzai Ona Facebook Page.  Youcan find the missal here. 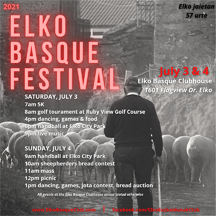 Please join the Elko Basque Club on July 3rd and 4th to celebrate its 57th Annual Basque Festival. The two-day festival is filled with events for the whole family, including the annual 5k and golf tournament, Basque dancing, pilota, live music, games, contests and much more. All events will take place at the Elko Basque Clubhouse (1601 Flagview Dr.) unless otherwise indicated.  For complete information including the full schedule of events, visit them on Facebook, or click here.

With many areas relaxing restrictions in place due to the pandemic, many of our member clubs have already hosted, or plan to host their annual Mus tournaments.  This is a welcomed change for many members of our Basque communities and clubs, providing an opportunity not only to get together, but also generate a little revenue after being unable to do so for so long.  With the shortened tournament season, NABO Mus has decided to include a new layer in the competition with Regional Mus Tournaments.  NABO clubs have been divided into four regions, each of which will hold its own tournament.  Local winners will now advance to a regional tournament, and winners at the regional level will advance to the NABO Mus Finals.  This system was devised to lower the number of participants at each level, hoping to facilitate holding tournaments respecting COVID protocols that differ from one state to the next.  As the tournaments progress, more information regarding the regional tournaments will be provided.  In the meantime, for a list of upcoming tournaments please click here. 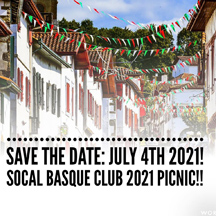 The Southern California Basque Club will host its 75th annual Basque Picnic on Sunday, July 4th.  The day will include mass, a lamb lunch, entertainment provided by Basque dancers and Klika, and Lukainka for sale in the afternoon.  There will also be a public dance with the winner of the club raffle being announced at 9pm.  For complete information, including how to get there, visit them on Facebook.