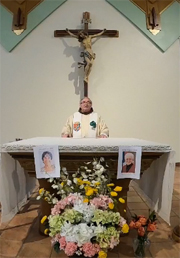 This Sunday, May 2nd, would have marked the Fresno Basque Club’s 43rd annual picnic.  Cancelled for the second year in a row, but in the best interest of the community, the day will at least include mass celebrated by Aita Antton Egiguren from the Basque Country from the chapel of the Franciscan Friars in Tolosa, Gipuzkoa.  Mass will be celebrated on Sunday morning at 8am (PST) and will be live streamed on the Artzai Ona Facebook page. The accompanying missal can be found here. On behalf of everyone at NABO we would again like to thank Aita for his continued efforts to minister to Basques in the US, even while in the Basque Country.  Mila, mila esker Aita!

Thanks to our friend, Xabier Berrueta, we found out about “Kontatu,” a YouTube channel by Joseba Artaraz and Bart Farrell that includes several short informational videos, in English, about Bilbao mainly, but also other points of interest in the Basque Country.  Here is the one that Xabier shared with us on the occasion of Athletic Bilbao competing in the 2021 Copa del Rey Final.  We’re hoping that you may enjoy these as much as we did! 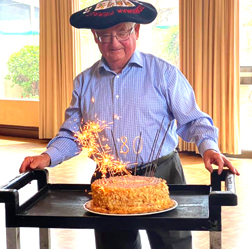 On behalf of everyone at NABO we would like to take this opportunity to wish Pierre Etcharren a very happy 80th birthday, celebrated last Sunday!  Pierre is the last remaining founding member of NABO that continues to be active in the federation.  We thank him for his many years of selfless service, and the willingness to share all of his experience with us. Zorionak Pierrot! Here’s to many, many more!