This week’s Official Bulletin of the Basque Country included the call for grants for individuals in situations of dire need in the Diaspora.  These grants are administered through Basque Clubs throughout the Diaspora and so interested individuals should contact the club closest to them as soon as possible.  Complete information on this aide, is available here in Basque and in Spanish (pdf), or by contacting the Delegation of Euskadi in the US. You can also reach out to the The Directorate of the Basque Community Abroad (euskaletxeak@euskadi.eus). Deadline to apply is April 17, 2021.

N.A.B.O. held its annual winter meeting last Saturday, March 13th via Zoom.  Although we are all longing to get together in person, these Zoom meetings have allowed attendance of delegates from member clubs, and visitors, that otherwise would not be able to attend, and that is always a good thing.  Saturday’s meeting included representation of 39 of N.A.B.O.’s 41 members clubs, as well as guests from all over the world, totaling 71 people in all.

Highlights of the meeting include a presentation by Gorka Alvarez, Director of the Basque Government’s Basque Communities Abroad who assured us that they continue working hard to provide whatever services we may need, and that we will come out stronger on the other side of this crisis, especially if we continue to work together.  He also introduced Unai Telleria, the new Delegate of Euskadi in the United States.  This was Unai’s first N.A.B.O. meeting and so a perfect opportunity for him to get to know more about us, and vice-versa. We all look forward to working with Unai in the future and wish him all the best in his new position.  Kinku Zinkunegi, Director of the Euskara Munduan Program through the Etxepare Basque Institute was also in attendance.  Kinku relayed messages received from people in the United States looking for Basque instruction, which segued into Sonia Castañon, N.A.B.O.’s Euskara Coordinator’s report.  The take away, is that more Basque teacher training would go a long way to improving Basque instruction at the club level in the United States.

One of the most exciting moments at the meeting was the inclusion of the St. Pierre et Miquelon Basque Club in N.A.B.O. Five members of the club’s board of directors presented a PowerPoint introducing us to their community and club. Although it has been registered with the Basque Government since 2017, their application for N.A.B.O. membership was recently received.  The reaction to their application was overwhelmingly positive, and we were happy to approve it unanimously on Saturday.  As President Philippe Acheritogaray said, “N.A.B.O. now spans 5 times zones and represents Canada, France, and the United States,” as St. Pierre et Miquelon is administratively part of France, although geographically located in North America. On behalf of everyone at N.A.B.O. we could again like to welcome St. Pierre et Miquelon, our 42nd entity, who has collaborated with other East Coast member clubs for some time.

We were also delighted to hear from Ander Caballero, newly elected President of the New England Basque Club.  After realizing that hosting a convention this summer may not result in the Basque community attendance desired, with COVID protocols still fluctuating, he announced that after working with the San Francisco Basque Cultural Center, that the 2021 Convention meeting and festivities would now become part of the Cultural Center’s annual Jaialdi in August. With this, the 2022 N.A.B.O. Convention would then be hosted by the NEBC, hopefully in coordination with the Euskalduank Quebec, and St. Pierre et Miquelon clubs as well. 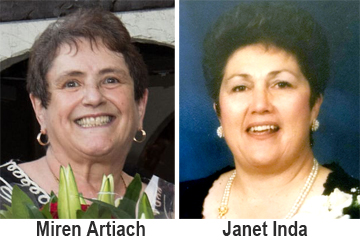 The most emotional point of the meeting came with two long overdue nominations for N.A.B.O.’s Bizi Emankorra or Lifetime Achievement Award. This year, Miren Artiach (Boise, Idaho) and Janet Inda (Reno, Nevada) were nominated for their contributions, not only in regards to the founding of N.A.B.O., but also for their pivotal roles in creating Music Camp, now known as Udaleku, and their hard work and commitment not only to N.A.B.O. but also to their respective Basque communities. The awards will be presented publicly at an event(s) to be announced at a later date. We offer our heartfelt gratitude and sincerest congratulations to these two women, whose efforts have made it possible for us to have a thriving and ever growing federation today.  As Philippe reminded us, “N.A.B.O. began with 8 clubs, and these two ladies worked hard to grow that membership.” Bihotzez mila esker eta zorionak bioi!

We were also happy to hear from longtime N.A.B.O. collaborator, Pedro Oiarzabal, who updated us on the progress of the “Fighting Basques” project that continues to gather information on Basques who served in WWII. This is a very worthy project, and so if you would like to collaborate please contact them directly by emailing sanchobeurko@gmail.com.

We are also very happy to announce that the N.A.B.O. Calendar will resume in 2021 featuring a different N.A.B.O. member club each month.  We will let you know when these will be available, hopefully by August, in an upcoming Astero.  Mark your calendars for August 28, 2021, the date set for the next N.A.B.O. meeting in conjunction with the festivities at the San Francisco Basque Cultural Center.