The Chino Basque Club will celebrate its 51st annual picnic this weekend Saturday, August 31st and September 1st.  The festivities will begin at the Aphessetche Trinquet (97262 Bickmore Ave., Chino) with the NABO Pilota Finals.  These matches will be followed by an exhibition by professional pilotaris from Iparralde beginning at 5pm.  Everyone is then invited to go to the Centro Basco Restaurant for a “pre-picnic dinner.” The menu will include oxtail stew and stewing hens & rice.  Sunday will begin with mass con-celebrated by Aita Jean Pierre Cachenaut, and Aita Antton Egiguren at 10am at the Chino Fairgrounds.  Mass will be followed by lunch featuring lamb and chicken, and entertainment provided by the club’s dance groups, and Klika.  Dinner will be served at 6pm followed by a public dance to the music of Jean Louis Bergara and Beñat Chaubadindeguy. The evening will also include a raffle for $1,000 that will take place at 9pm.  On Monday, the Centro Basco will serve a Basque breakfast beginning at 9am followed by more pilota by the professional players from Iparralde.  For complete information, please see their August newsletter. 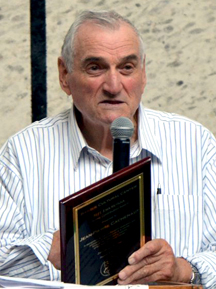 Last weekend, the San Francisco Basque Cultural Center hosted its annual “Jaialdia.” As part of the festivities many people were honored at a ceremony following Sunday’s mass.  First, was Aita Jean Pierre Cachenaut who served as the Basque Chaplain to Basques in the US for 9 years (1977-1986). He was presented the Cultural Center’s Bizi Emankorra award for his service to the community, as well as his role in supporting the construction of the Cultural Center itself.  Next to be honored were two extraordinary members of the Center, who are both 100 years old: Marie Goyhenetche, and Mary Rita Iturriria.  Both ladies were present and received a very warm round of applause.  Also honored was Jean Marc Charriton for his hard work and dedication to Basque Pilota.  Mr. Charriton was traveling with the professional pilotaris from Iparralde and is also the new owner of the Berria Trinquet in Hazparne.  Please enjoy the bios of Marie and Rita here. 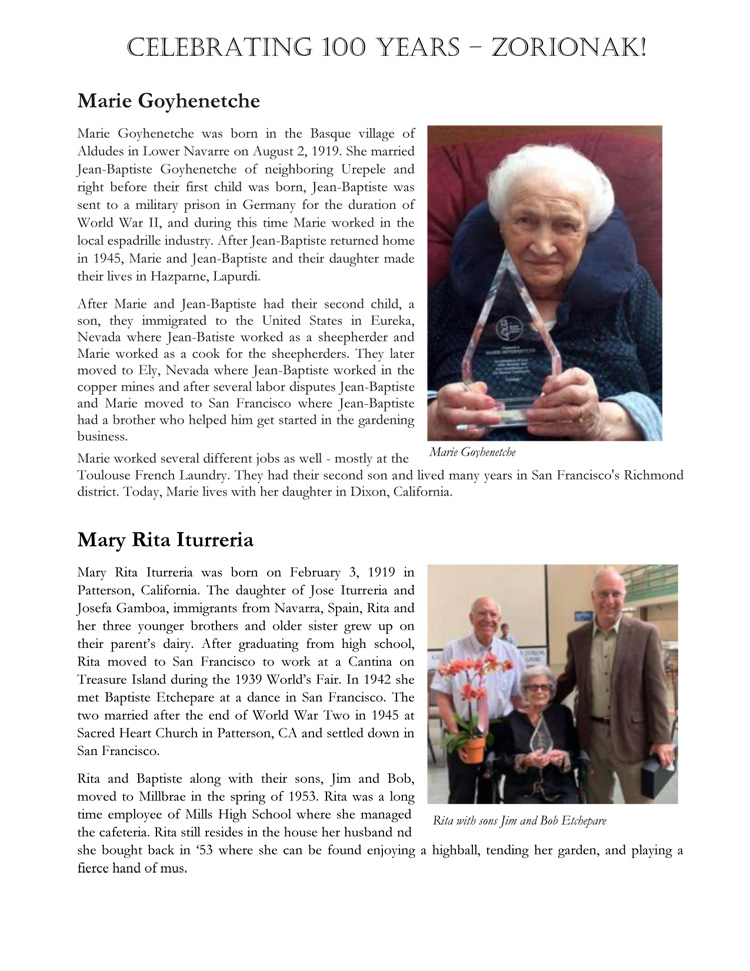