Boise’s Euzkaldunak will celebrate the Center’s April Anniversary Dinner this Saturday, April 13th hosted by Boise State University’s Center for Basque Studies. Doors open at 6pm with dinner served at 6:30pm.  Reservations tickets will be available at the bar before dinner.  Cost of the meal is $14 for seniors, $15 for members, $20 for guests and $5 for children 10 and under.  Saturday’s menu will include salad, baked chicken, white fish with pimientos, Basque rice, vegetables, desserts, bread, coffee and wine.  Please RSVP by emailing dinner@basquecenter.com. There will also be free babysitting during dinner, so please indicate if you will require that as well when making reservations. On egin!

The Santa Rosa Basque Club will host its annual Mus Tournament this Saturday, April 13th.  Registration will begin at 9am with tournament play beginning at 9:30am.  Cost to participate $25, which includes the Mus fee, breakfast and lunch.  You must be a club member to participate, with the $20 membership dues payable at the door.  If you aren’t playing Mus but would like to join them for lunch, the cost is $15, with lunch being served around 1pm.  Sorte on deneri!

The Seattle Euskal Etxea will host its spring dinner on April 13th at St. Alphonsus Family Center in Ballard. The festivities will begin with a Mus Tournament at noon, followed by dinner at 4pm.  There will also be a Jr. Mus Tournament for those between the ages of 10-17.  If you are interested in participating in either tournament, please email Gaizka Mallea. The dinner menu includes paella, lamb, lomo and txorizo sandwiches, jamon serrano, garbanzo soup, cheese, wine and beer, with many of these items being donated by fellow club members.  For complete information including cost and directions, see their flier, or visit them on Facebook.

The San Francisco Basque Cultural Center will host its annual Palm Sunday Celebration on April 14, 2019.  The day will begin with mass at Notre Dame des Victoires Church (566 Bush Street, 94108) with the participation of the Klika and the Elgarrekin Choir.  Mass will be followed by hot chocolate and croissants at the church hall, and then everyone will head for the Cultural Center in South San Francisco.  Once there, there will be an Easter Egg Hunt followed by lunch at 12:30pm.  For complete details, including cost of the meal, visit their website. 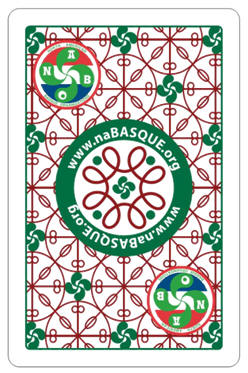 The NABO Mus Finals will take place on June 1, 2019 hosted by the Santa Rosa Basque Club at the Winnemucca Convention Center East Hall, in Winnemucca, NV.  Tournament registration will begin at 7:30 with play to begin at 8am on the ground floor.  The Santa Rosa Basque Club will provide breakfast and lunch for the players, and guests may join for lunch for $20, after RSVP’ing via email srbc.paradise@gmail.com.  If your club has not yet sent in the names of the winners of your tournament, please email etcharren@msn.com with your tournament winners and total number of teams that participated in your tournament.  Please advise your winners to familiarize themselves with NABO Tournament Rules before the tournament. For complete information on the tournament, including hotels in the area, visit the NABO Mus page.